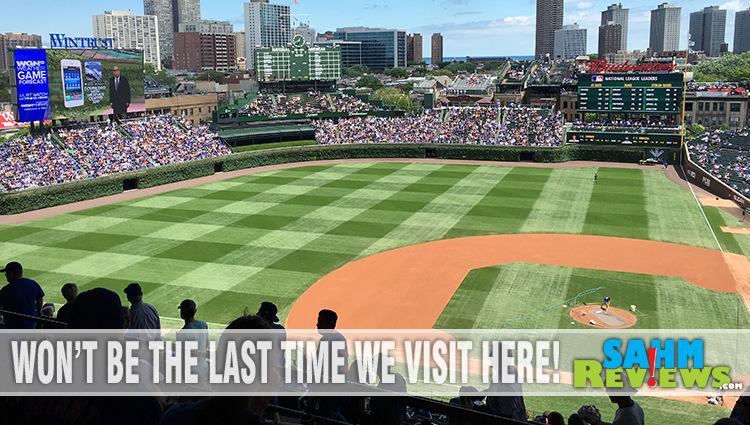 I don’t want to speak for Scott, but since that’s what I normally do anyhow, why should this be an exception? We’ve mentioned before that we met at a Cubs game in St. Louis back in 1990. But even before that, we were both lifelong Cubs fans. I was a fan thanks to their minor-league affiliation here in the Quad Cities when I was a kid, but Scott knew more about the team, including stats about his longtime idol, Ernie Banks.

In all those years since we met, it wasn’t until 2014 that Scott and I decided we could (and should) spend some time together without the kids. They stayed with my folks for a day and we made a trip to Wrigley Field for a Chicago Cubs game. Finally. It was Scott’s first time at the legendary stadium so we were happy we had secured decent seats on the first base line. Not only did it offer us a close-up of the game, we were also able to see inside the Cubs dugout.

This year we decided to surprise the girls with a weekend trip to Chicago. On Saturday we attended Redhead Days and Sunday was Cubs day. In the days leading up to the trip, we visited multiple retailers to find just the right shirts to wear to the game. Unfortunately, we weren’t able to find something that each of us liked and wished we had ordered Cubs shirts online ahead of time. Even with research and planning, we felt we left a lot on the table and wish we had prepared even better. We have some ideas on how to save even more money on our next trip to Wrigley Field. 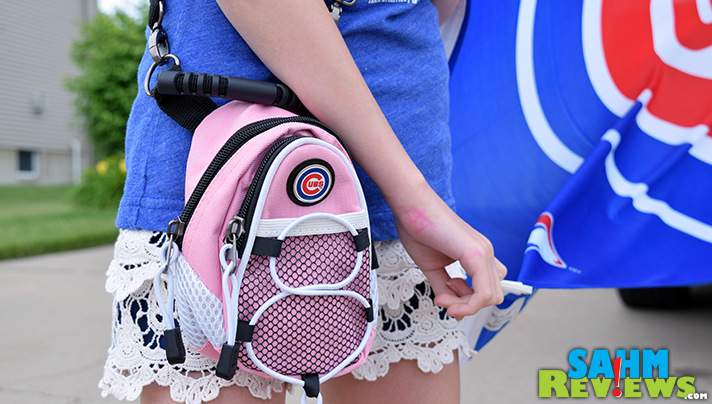 First and foremost, we’ll plan ahead for souvenirs. Regardless of the age of the kid (including the ones in the 40+ age bracket), everyone wants something to show their team pride. We opted to get the girls miniature backpacks large enough to hold their phones, a power bank and small charging cable along with money and other necessities they needed to carry. For me, I’m happy with Cubs jewelry; something like a Cubs bracelet or earrings that I’ll be able to use year-round. Of course, there are a lot of cool souvenirs for men, women and children to choose from online! (Can you hear me whispering? “Dooney and Bourke has Chicago Cubs purses and bags.”) 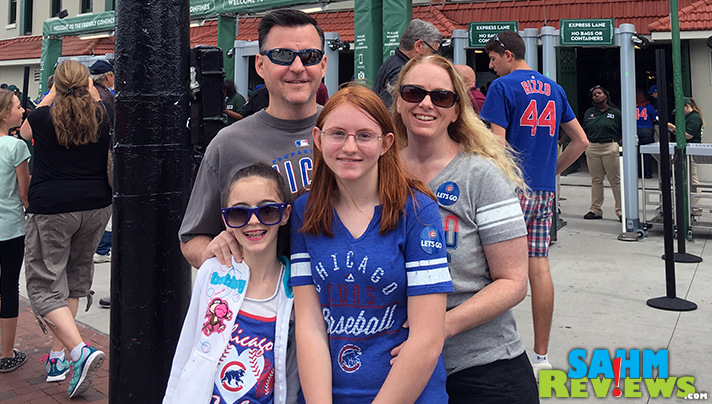 Most people, including us, show up at the stadium wearing shirts and baseball caps with the Chicago Cubs logo.  As I mentioned previously, a local retailer is an option but the selection online is MUCH better. Yes, these items are available at the stadium, but it will save a lot of money (and stress) if we purchased ahead of time allowing more time to explore once on site. Plus, the customary picture in front of the stadium prior to the game will include extra team pride. 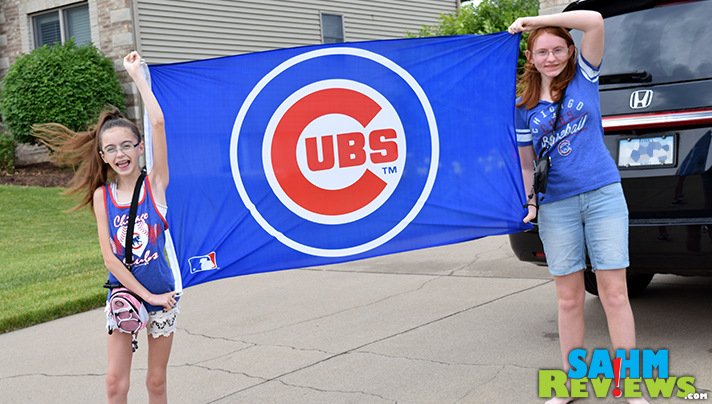 We’ve never taken the time to make signs, but the girls were definitely jealous when other kids were making it onto the big screen. While we considered bringing along our Cubs flag, something disposable is probably a better option. Our next trip to Wrigley Field will include some pre-preparation so the girls can increase their display of team spirit and have a better chance of being picked out in the vast crowd. Supplies are cheap enough (and chances are there are plenty of extra leftovers from school).

If you use Spot Hero or even are planning just to park near the stadium, you may be in for a price shocker. We saved all our money by utilizing the Chicago Cubs offsite parking lot that included free shuttle service to the stadium. The buses drop off at one of the gates with return service throughout the game all the way until two hours after the game lets out. 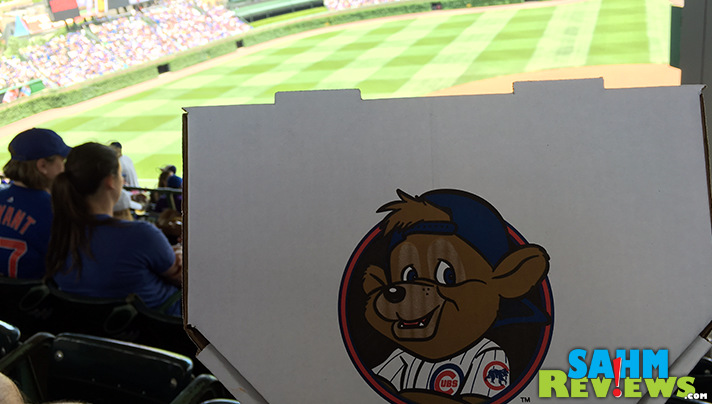 Our original plan was to explore the stadium once we found our seats. But the usher informed us that concessions are on sale for 25% off until a certain time. We stocked up on food and made ourselves comfortable. When I got home, I researched to find out if this was something unique to the day we attended but discovered it’s a regular promotion. Wrigley Field offers discounts on concessions for an hour after gates open.

Oh Penny, Where For Art Thou? As I’ve said before, Squished Penny Machines are one of the best souvenirs ever. They cost a whopping 51¢ and take up hardly any room! While sitting at the Cubs game, I searched online to see if there was a machine at the Wrigley Field. Apparently there was one but it wasn’t until the game was over that I bothered to ask anyone. By then, they had already put the machine away. If you’re looking to add a Chicago Cubs squished penny to your collection, ask for directions then go get it when you’re done with your discount concessions. 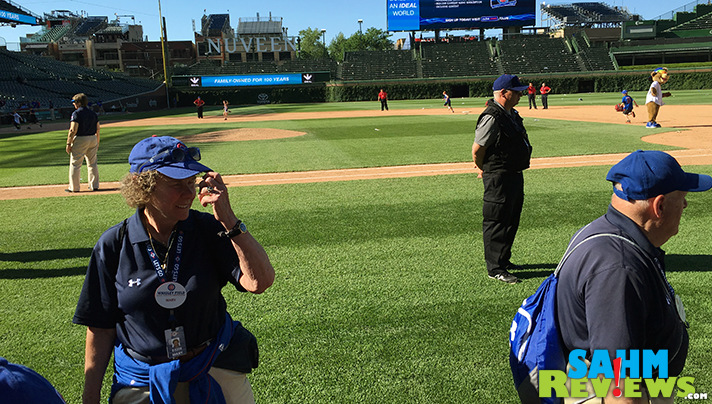 Talk about really cool, unexpected surprises! Apparently on Sundays, the first 1000 kids 13 and under can run the bases at Wrigley Field after the game. It’s free and the only requirement is that kids get a wristband when they enter the stadium to show they are one of the first 1000. It was a long line, but the staff keeps the line moving. They announce no photos or videos on the field, but that was basically saying that they couldn’t stop while running. We were able to take photos and video (of our kids in line and running) as long as we didn’t step on the grass. Only one adult is allowed on the field with each child, but additional adults and older kids are allowed in the section behind home plate. It’s a great opportunity to say you’ve been on the field!

We’re already talking about our next trip to see the Chicago Cubs play and know what strategies to implement for our next visit.

Have you ever been to Wrigley Field?