If there was ever a perfect example of “don’t judge a book by its cover”, the new game by Japanime Games, Dragon Pets, is the one. After playing it a few times this fall, we knew it needed to be featured in our Holiday Gift Guide. More specifically, it earned a spot in our Family Games recommendations!

From looking at the box and suggested minimum age, you’ll get the impression that this is a kid’s game and more suited for our Games for Younger Kids list. Once you see how Dragon Pets is played and the depth of strategy needed to truly be successful, you’ll understand why we now haul this to our weekly game night where we play board games with other adults. 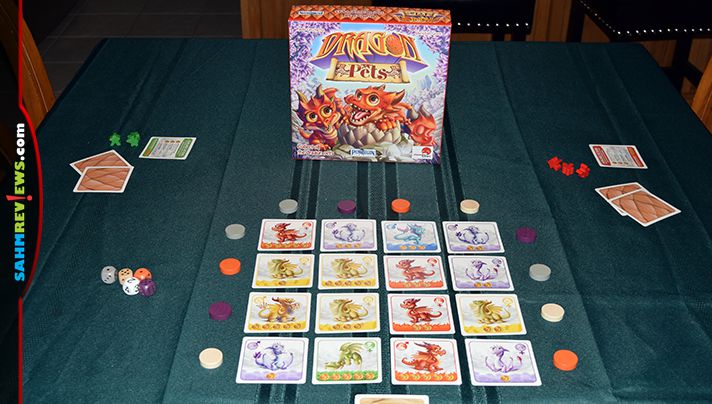 In our title we’ve referred to Dragon Pets as a matching game, but this isn’t just a dressed up version of Concentration. Yes, you are trying to collect pairs of colored dragons. In fact, you’re doing so to breed them! And only by correctly matching up males with females will you score points for creating a baby dragon! 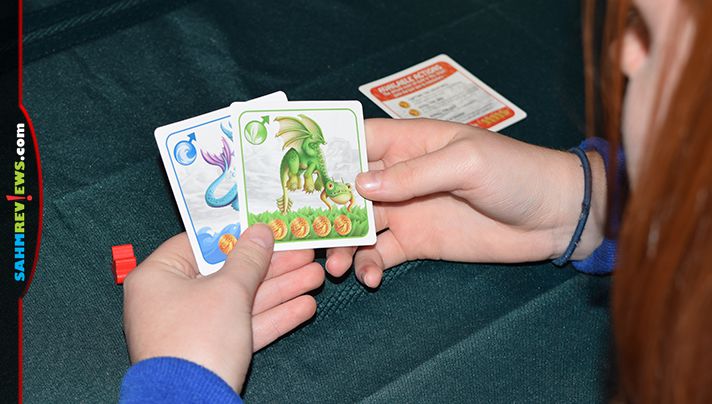 At the beginning of the game you will deal out a 4×4 grid of Dragon cards to the center of your play area. Each player (up to four) takes control of one side of the square and places their four colored wooden discs next to each row. The only limitation is a row or column may not have the same colored disc on both ends. Otherwise, position doesn’t really matter. 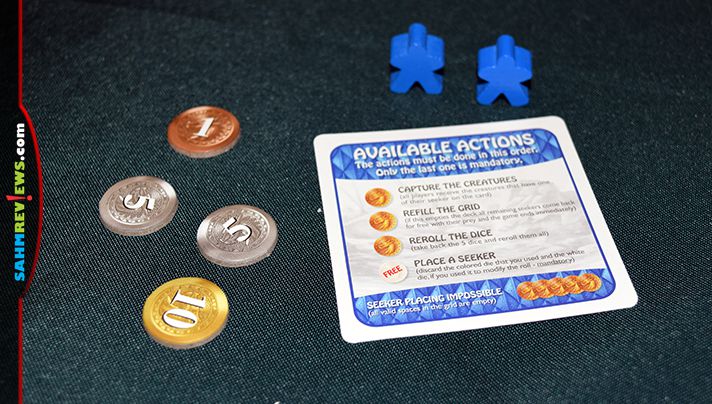 All players begin the game with two randomly dealt Starter Dragon cards, a player aid card, three wooden Dragon Seekers (meeples) and eight gold coins. The rest of the coins form a bank and the shuffled Dragon cards are set by the previously-created grid. The first player will roll all five included dice and place the four colored ones on top of their matching discs on the active player’s side. The white die is kept to the side for now. 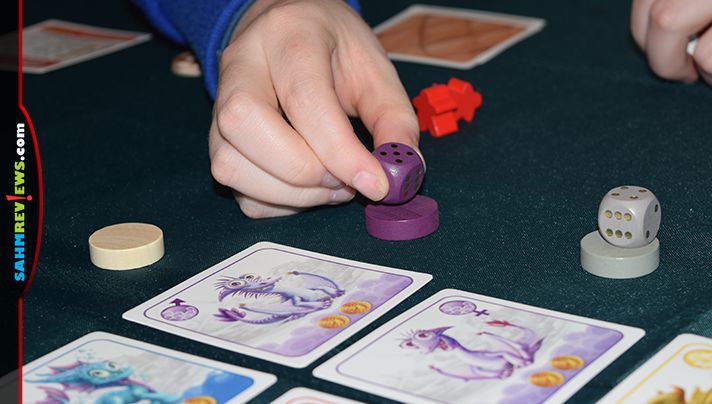 On your turn you may choose to take a number of actions, which must be resolved in order. There are three optional actions which each costs one gold to perform, which we’ll talk about in a minute. On every turn you are required to take a final action of placing one of your Dragon Seekers on a Dragon card in the grid. Examining the dice, choose one and count the number of cards across equal to the pips shown on the die. Then place your Dragon Seeker on that card to claim it. 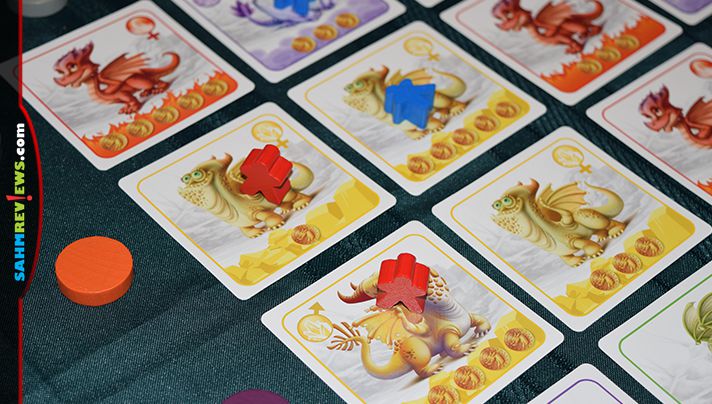 You may use the white die to add or subtract its value from the die you are utilizing. All dice used in this process are set to the side and cannot be used by other players at this point. Move the remaining dice to the matching discs of the next player. If another player already had their Dragon Seeker on the card you wish to claim, return it to the owner and pay them one gold coin for the trouble before placing your meeple there. 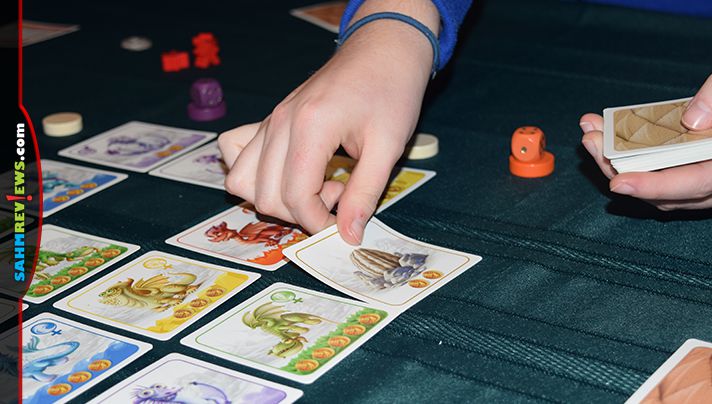 As mentioned before, there are three optional actions available to you before you place your Dragon Seeker. You may choose to catch dragons, which allows all players to take the card underneath their Dragon Seekers into their hand. You can also refill the grid, calling out which spot you are filling before drawing the Dragon card. Lastly, you may reroll the dice. This is the only way to get the full pool of dice back into play. Otherwise you are only able to use the passed along dice on your turn! 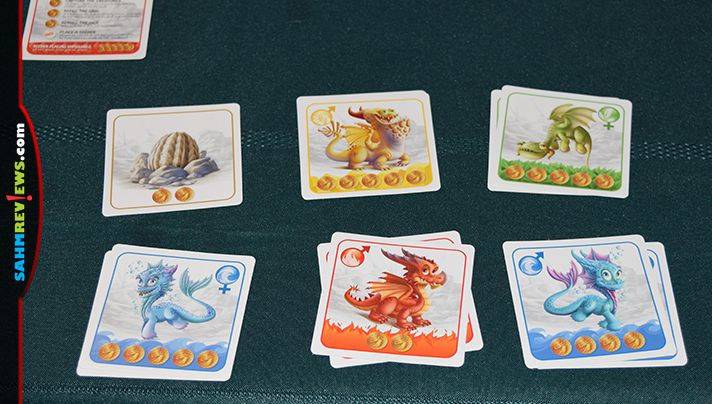 At any time that you have two Dragon cards of the same color and opposite sexes, you immediately breed them. Take them from your hand and set them into a personal scoring pile and collect gold matching the higher of the two amounts on the Dragon cards. There are also Dragon Eggs that yield two coins immediately when collected and are also placed face-down into your scoring pile.

Once the draw deck runs out, the game of Dragon Pets ends immediately. Players claim any Dragon cards still in the grid which they have Dragon Seekers on, mate them if possible and collect the bounty. Any Dragon cards left in your hand that you were unable to breed gives you a penalty matching the number of coins shown. If you were able to breed at least one pair of all five different colored dragons, you receive a five coin bonus. Additionally, if you collected two eggs, you may use this pair as a wild and apply it to your dragon sets. This means you’d only need four different breeds of dragons and the eggs counts as a fifth! Count out the coins in each player’s possession and the person with the highest total wins Dragon Pets! 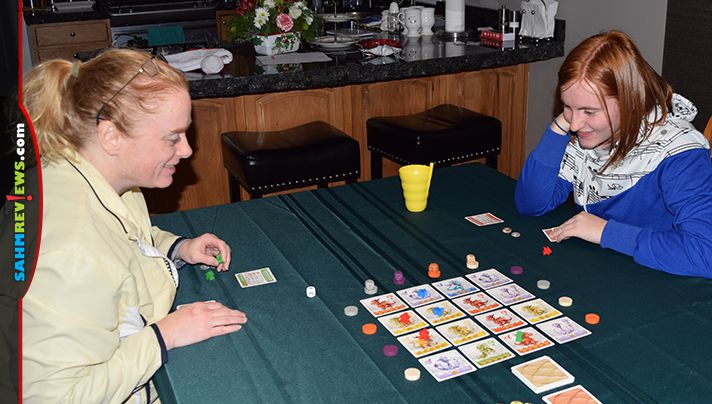 The concept behind Dragon Pets seems so simple, but there’s actually a lot of decisions to make while playing. When to reroll the dice, when to collect the dragons, when to refill the grid and even which dragons to try to claim! All while preventing your opponents from doing the same! You can examine the dice to determine your best course of action or reroll to prevent the next player from getting the one you think they want. The competition is all in good fun because you’re all breeding these darling dragons!

A great example of a game that is not only appropriate for all ages, is actually a lot of fun for all ages too! You can find copies on Amazon or at your local game store for a very reasonable price. We first told you about Japanime Games when we featured their comic strip influenced games, Managaka and Cartooner. They have a wide range of game types including ones specifically for a more mature crowd as well as others more family-centric. Check out their entire line on their website and catch up on their Facebook and Twitter timelines to see what’s coming out next!

Wouldn’t you just love to have a baby dragon as a pet?!