We have a friend who is into cat. And when I say “into cats”, I mean REALLY into cats. She fits the moniker of Cat Lady to a T. Every time we run into her I remember all the characters we’ve seen on TV parodying a women that owns multiple cats. From Robert Dinero’s portrayal on Saturday Night Live to an early Simpson’s episode featuring a typical Crazy Cat Lady with whom Lisa is trying to interview for a human interest story.

I immediately thought of our friend when we spotted a copy of the new Cat Lady card game at this year’s Gen Con convention. In this brand new title from Alderac Entertainment Group, everyone plays as a cat lady who is part of an elite group of cat people, including Marie Antoinette and Ernest Hemingway. Your job is to collect toys, catnip and more for your felines while making sure you have enough food to feed them! 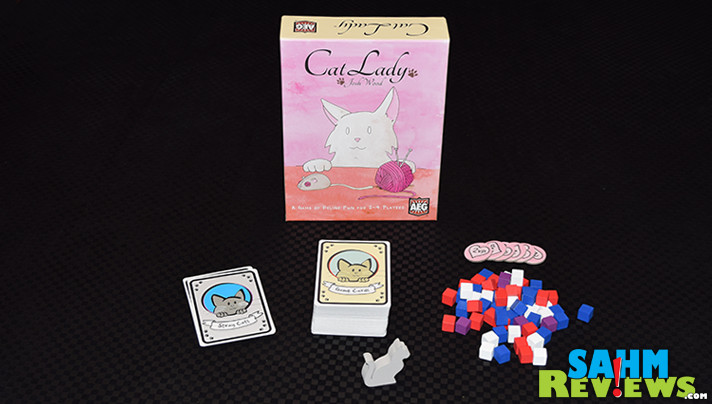 We’ve classified Cat Lady as a card game even though there is more in the box than just cards. Colored wooden cubes represent chicken, milk, tuna and a wild (purple) that can substitute as any of the other foods. A cute oversized wooden cat meeple will also be used to protect certain cards. 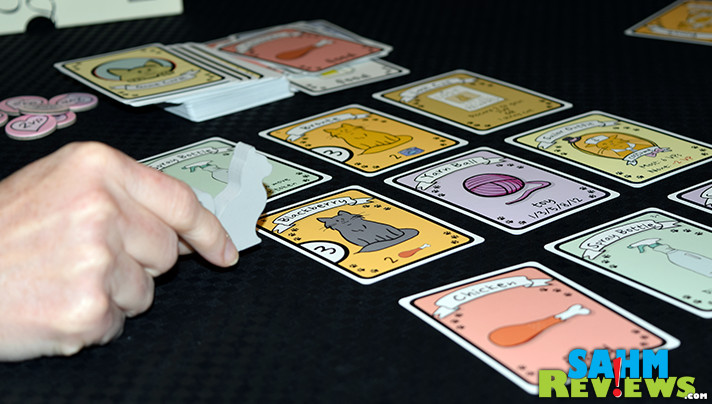 After shuffling the main and stray cat decks of cards separately, nine main cards are dealt out into a 3×3 grid and three stray cat cards are turned face-up, with each set of cards placed close to their respective draw deck. A first player is chosen and the player immediately counter-clockwise from them chooses a row or column on the 3×3 grid in which to place the large cat meeple. 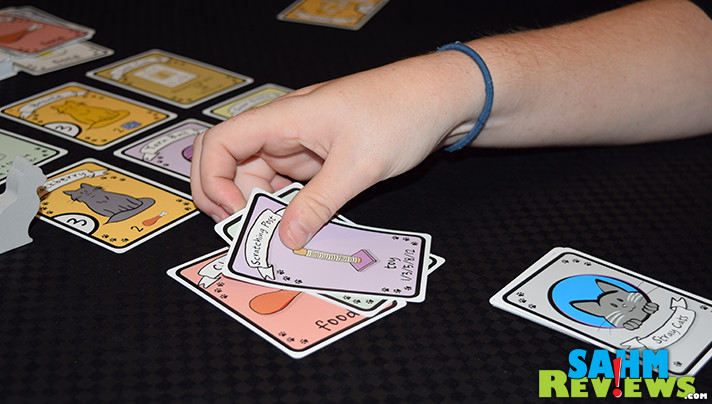 On your turn you will collect three cards from a row or column in the grid, except for the one protected by the cat, and then move that wooden meeple to the row or column you just took (the next person now cannot take the same three cards). When you pick up your cards, depending upon what they depict, you will either resolve them immediately or save them in your hand for later. A cat card is placed face-up in front of you to your growing collection. A food card is discarded and the corresponding wooden cube is collected from the pool. Other cards such as toys, catnip or costumes are kept in your hand until the end of the game for set scoring. 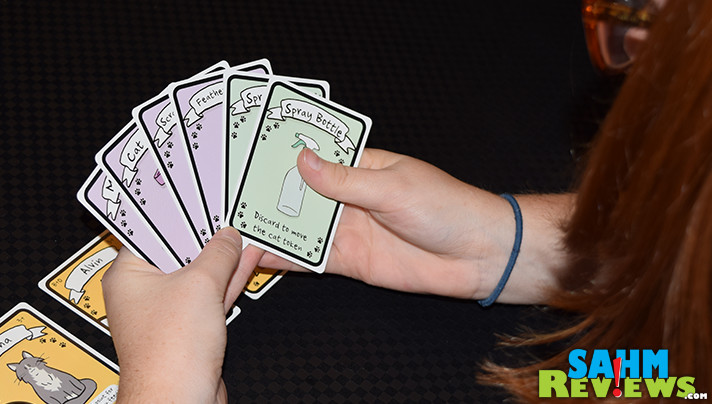 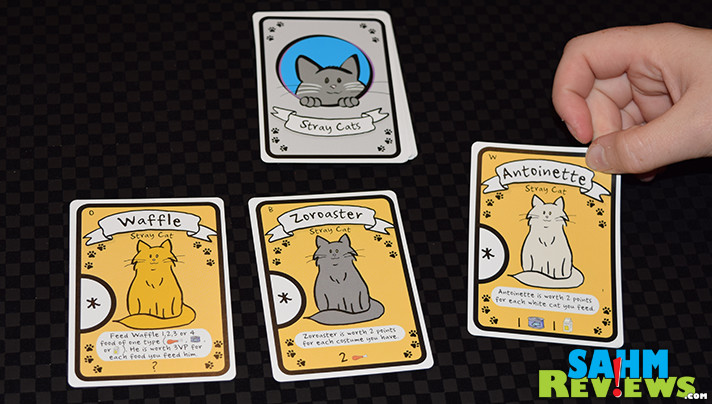 Spray bottles are also saved in your hand until played. These allow you to move the cat token either before or after you make your turn’s selection. This will open up a previously blocked row or column, or will block a specific one for the next player.  Without the use of a spray bottle, the cat meeple moves to the row or column that you just collected from (it will be refilled at the end of your turn, so these new cards will be off limits to the next player). 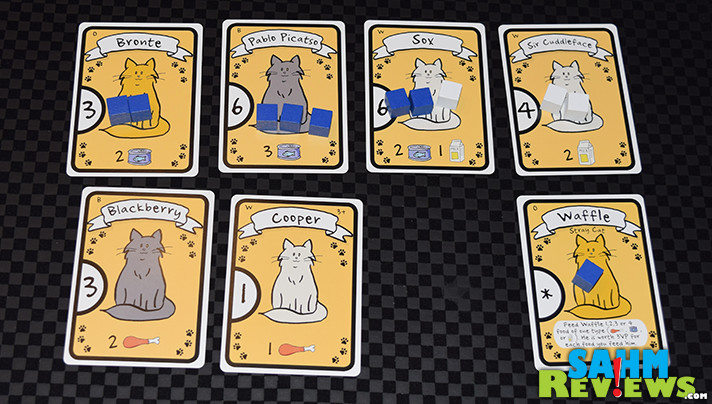 A game of Cat Lady ends when you need to refill a row or column and there are no cards remaining in the draw deck. At this time you must feed your cats! Each cat card you collected has their food requirements listed and you must pay in matching cubes. If you do, you will receive the victory points listed on the card. Fail to feed successfully and each unfed cat will cost you two VP’s! Additionally, if you have too much food it is a bad thing. The player who has the most food leftover after feeding all of their cats also loses two victory points!

Those saved cards (costumes, catnip, toys) now come into play. The person with the most costumes received six VP’s and if you don’t have at least one (because all cats love costumes), then lose 2 VP’s. What do cats love more than costumes? Catnip! If you only have one catnip card, then deduct 2 VP’s. Two or three gain you a victory point, while four or more nets you two!

When collecting toy cards, variety is the spice of life. If you have 1, 2, 3, 4 or five different toy cards, you’ll collect 1, 3, 5, 8 or 12 points respectively. Also pay attention to the special abilities on each cat card you rescued. They may award extra points for being around other similar cats or have certain limitations on the food types they may eat. The player with the highest overall total from all of these sources wins Cat Lady! 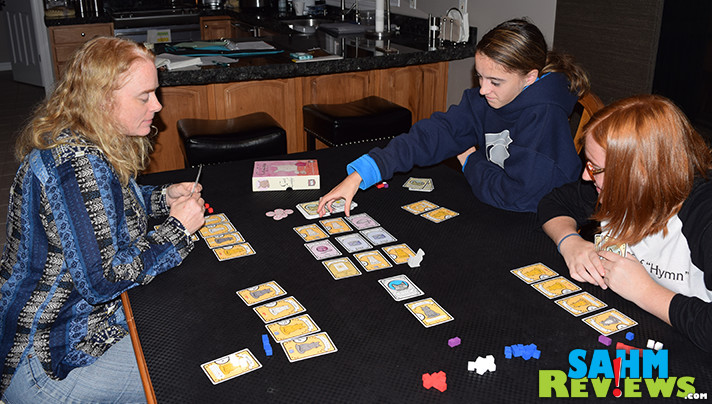 Cat Lady reminded us of a couple games we’ve previously featured (Herbaceous, Sunset Over Water) if only for the similar scoring categories and mechanisms. The drafting phase of Cat Lady is unique and the ability to prevent the next player from having the best choice with use of the cat meeple keeps the interaction between players high.

This has been a popular game this year, so if you see a copy of Cat Lady at your local game store, grab it while you can. You can also rescue a copy on Amazon or possibly at big box retailers. What’s next in store for AEG? You’ll have to follow them on Facebook and Twitter to find out!

How many cats do you own?