I think every family with kids has a passion for the circus. We always looked forward to the arrival of the annual visit from Ringling Bros. and Barnum & Bailey to our local concert arena. Sadly that grand circus is a thing of the past with the company electing to stop production last year and bring and end to over 130 years of performers and acts. We feel fortunate to have attended more than one performance with our kids and still have a giant lollipop tucked away as a souvenir.

It should come as no surprise that because of this fondness of The Greatest Show on Earth that whenever we come across a game with a circus-like theme, it must become part of our collection. In the past we’ve talked about Kerala and Topito, both games with a strong circus setting. Recently we came across another one at the Origins Game Fair that deserves mentioning! And after playing Junk in My Trunk by CSE Games, we realized it would have been curated even if it hadn’t been dressed in bright colors. 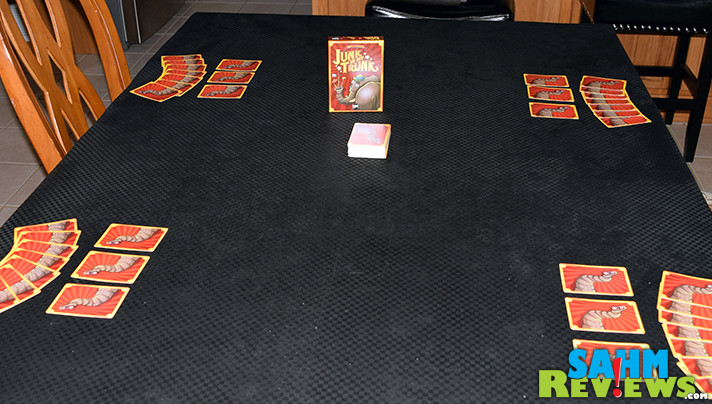 As with many card games, your goal is to be the first player to get rid of all of your cards. However, in Junk in My Trunk, you’re not only worried about sluffing off the cards in your hand, you have a couple of junk piles in front of you that also must be cleaned up! You might have guessed it by the name – you’re playing as elephants who are cleaning up after the circus has ended! But instead of picking up trash, you’re picking up and playing cards! 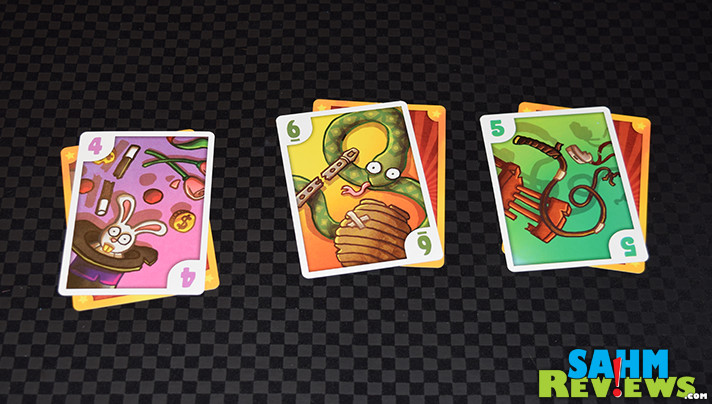 Each pachyderm (player) begins the game with a hand of seven cards randomly dealt to them from the deck of 108. Three face down cards are also set in front of them, with the rest of the deck set in the middle of the play area forming a draw deck. All players then select three cards from their hand and lays one card face up on top of each face down card. These 2-card piles are called your “Junk Piles” and will remain there until your hand is empty.

Turns are simple to explain and play. On your turn you will either play a card to the center discard pile or a number of cards if they match exactly. Additionally, they must be of a face value equal to or greater than the one previously played. If you cannot play, then you must pick up the ENTIRE trash pile and add them all to your hand! While this does sound punishing, do not worry when it happens to you. On subsequent turns you will be able to play numerous cards to the trash pile since you have many to match. 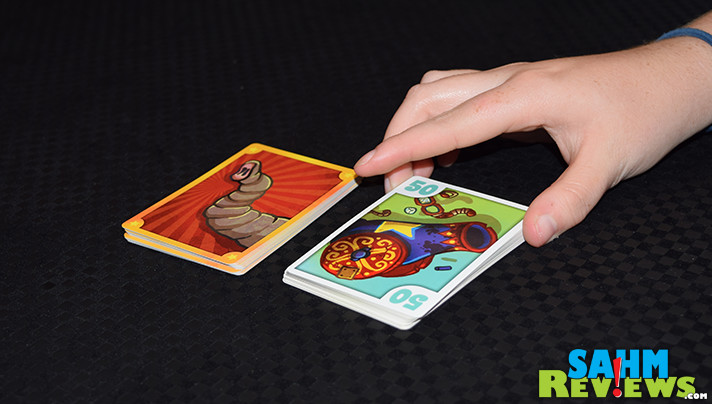 Once you finally rid your hand of all cards, now your attention turns to the junk piles. You may now play from the three face up cards utilizing the same rules as before (multiple cards if they match and equal to or greater than the last-played card). If you cannot play and must pick up the trash pile, your attention returns to your hand. You may not continue playing from the junk piles until you once again rid yourself of all the cards you hold. 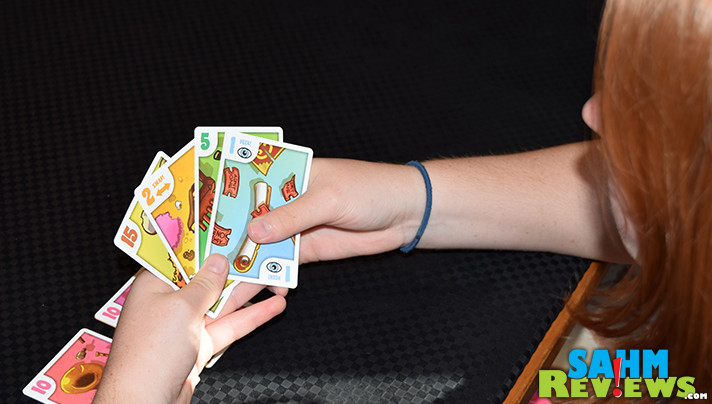 The same idea is true for the three face down cards at the bottom of each stack. Once the three face up cards have been played, you may now have access to these. But…you do not know what they are! On your turn you will choose a card, peek at it and play it if possible. If you cannot…you guessed it – pick up the trash pile and start working from your hand again! Try to remember what the card you peeked at was. It will come handy next time you gain access to it. 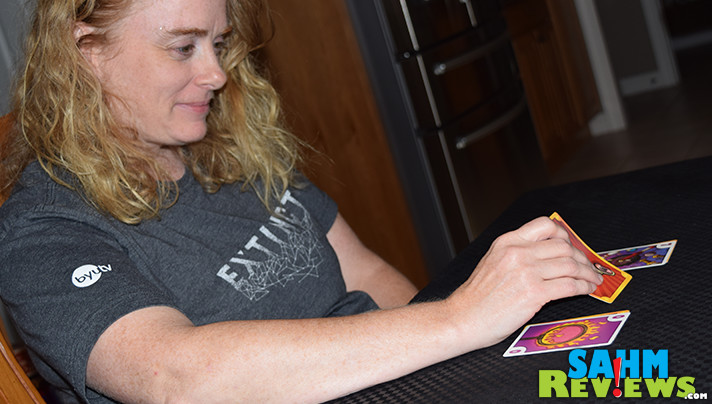 Various cards in Junk in My Trunk mix things up a bit. Ones allow you to peek at a face down card anywhere on the table! If you already know your three cards, you can get information about what your opponent is trying to play! When you play a two, you must swap junk piles between two players. So much for remembering your cards! But now you know one of your opponent’s! When 3’s are played, things get real tricky. You must flip over one junk pile! That pile must have two cards (one face up and the other face down) and they effectively switch positions!

You have to keep an eye on the discard (trash) pile as well. Whenever there are four or more identical cards on top of the pile, the player who placed the fourth one takes the entire trash pile and removes it from the game. They also get to take another turn right away! Slowly and surely as the game progresses, the deck of available cards in Junk in My Trunk becomes smaller and smaller! 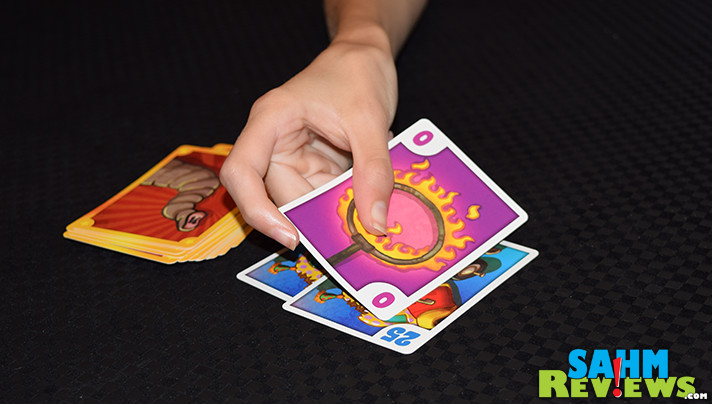 And let’s not forget the wild cards! In addition to regular wilds that allow you to play it on top of any card, there are versions that award another turn and one that also sweeps away the entire trash pile! In all cases the top card is now valued at zero and the next player (or the same player if awarded a bonus turn) may play any value to the trash. A game of Junk in My Trunk ends when one player gets rid of all of their cards and that person is considered the lucky elephant!

Supporting up to seven players and lasting around 20 minutes (maybe a bit more if playing with the full compliment of seven), Junk in My Trunk is a very solid twist on the card-shedding genre. Available on Amazon or at your favorite local game store, you’ll get a lot more than peanuts for the $15 MSRP. Consider picking up some protective sleeves for the cards as this one will get played a lot!

Make sure you’re following CSE Games on both Facebook and Twitter to find out all about two new titles about to hit the market! Including one in which we had some input about the pieces! (But that’s a story for another time!)

What was your favorite part about the circus?