For every action there is an equal and opposite reaction. It’s the most common translation of Newton’s Laws of Motion. But if you stop and think about it, the theory applies to much more: life in general, the things we do, Karma. Think about it for a minute. If a child does something wrong, a parent should be providing the appropriate punishment in return. If a criminal breaks the law, the courts should pass judgement accordingly. If you eat unhealthy and don’t exercise, you are likely to gain weight or have health issues.

And like a geek, I see it translated into a game: The Manhattan Project Energy Empire by Minion Games. The decisions you make in this game will impact how you play. Okay, that’s true of any game… if you make bad decisions, you aren’t likely to win. In this case, I mean within the game itself, I see the concepts of Newton’s third law in play. It’s a science game about energy and what happens if you build using wind energy versus oil – you are going to net different results. 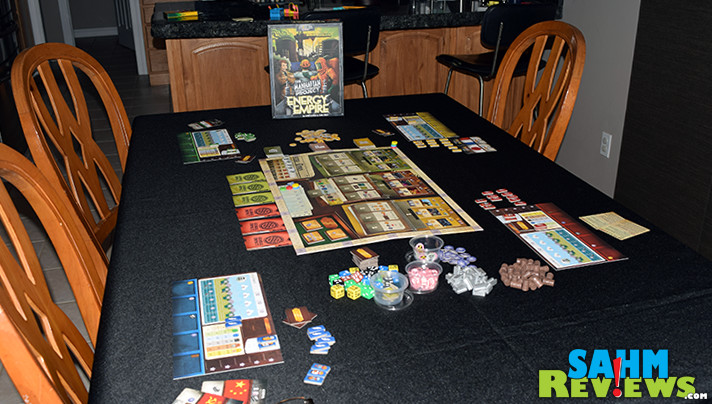 You may recall us featuring The Manhattan Project board game back in 2015 and Manhattan Project Chain Reaction card game last year. While those were more consistent with the historical process, the research and development of bombs that changed the world forever, let’s be honest. This isn’t a game about harvesting energy. It’s about the economic and technological changes that took place following World War II. The premise of Energy Empire is to rise to the top of all nations by building power plants, generating energy and using resources. 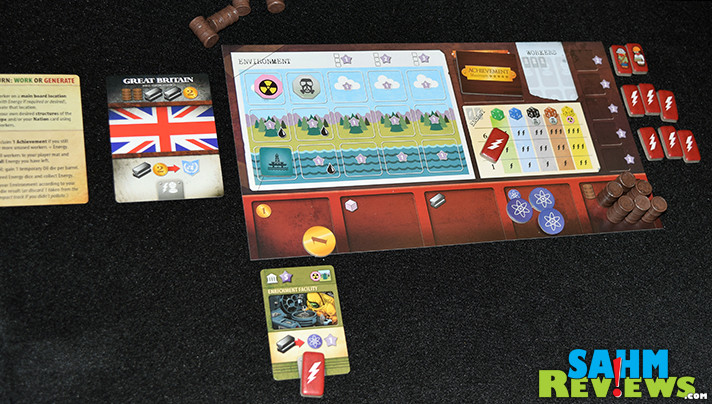 But as in real life, building comes at a cost and the better you’re able to mitigate problems, the better your empire will be. Energy Empire accommodates 2-5 players and can last anywhere from 1-2 hours. Players alternate turns with the end-game trigger being the last pollution token removed from the board. How appropriate. The game consists of a main board while each player has their own board as well. The main board is populated with structures, oil prices and pollution tokens. 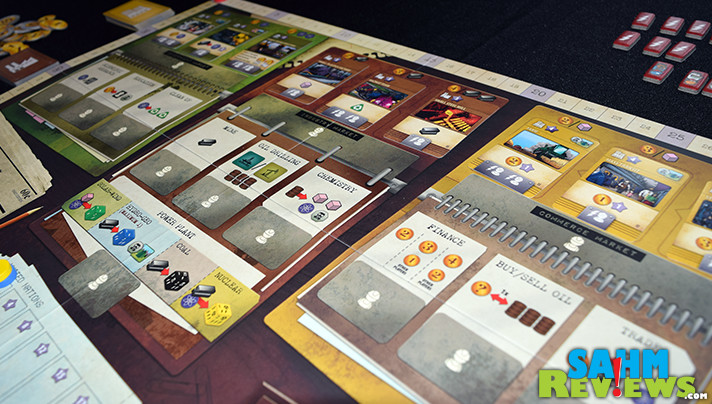 There are many things happening throughout the game, but the steps are pretty simple. On every turn, players do one of two things. You can either Work or you can Generate, with each containing its own set of steps. If you don’t have workers, you have to Generate. If you Generated on your last turn, you’ll probably head back to work. Simple. 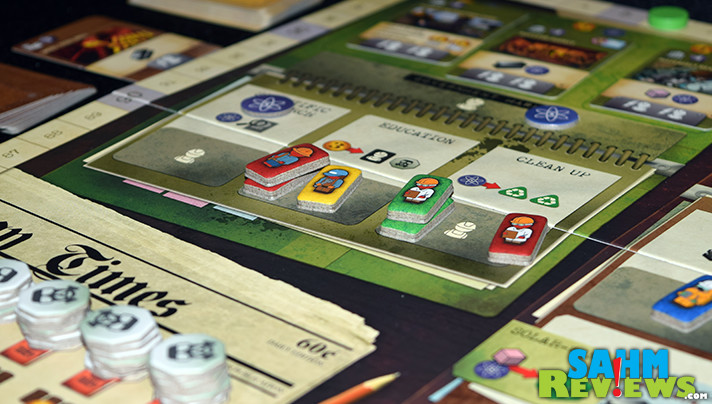 So let’s look at what happens when you Work. First you’ll place a worker from your player mat onto the main board. The various parts of the board serve different functions. Choices include Government, Industry and Commerce. In order to place somewhere, not only do you need to have the required resources to spend, you’ll also need to have the tallest stack. Stacks include a worker and any number of energy tokens. As an example, if there are no workers there, you can place one worker and zero (or more) energy tokens. However, if the tallest existing stack is three-high, you must place one worker and three (or more) energy tokens. Once you have completed the action of placing workers, you must discard the required resources and carry out the action.

Next, you have the option to activate structures. You’ll acquire more structures as the game progresses and can activate as many (of your own) as you like. There are three caveats to this action. First, you’ll need to have the workers and energy required to do so. Second, the structure type must match the location where you placed your worker in the first phase of this turn. Third, and this one is a big one, building causes pollution! Even when you are careful with your other actions, you may end up with a very polluted community. There’s also an option to continually improve your clout in the United Nations which offers an opportunity to gain quite a few points at the end of the game! But that takes resources also so plan carefully. 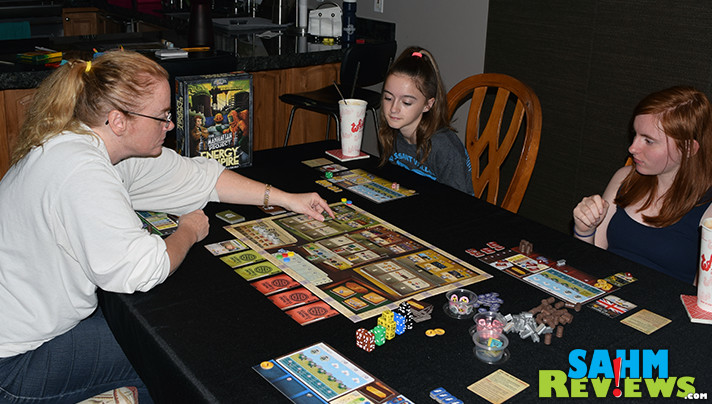 The other action option is to Generate. This happens when you run out of workers or resources, or want to regroup for a push in future rounds. Generate has five phases. If you haven’t used all your workers or energy, you may be able to claim an achievement. 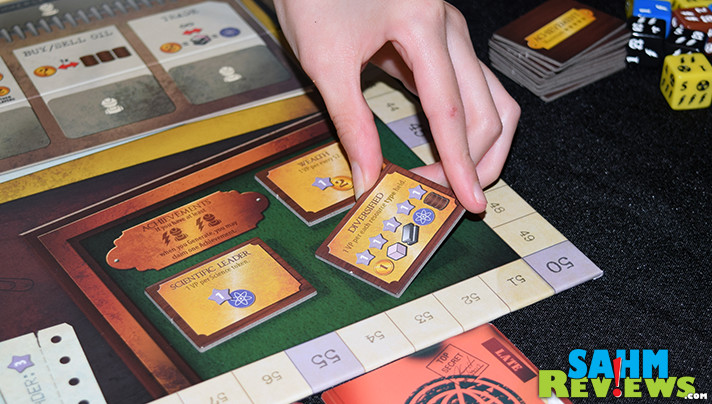 Achievement cards provide goals for end game Victory Points for only that player. Next, you’ll collect all the workers you have played and discard ALL your energy. Here’s where things start getting interesting. It’s time to refine oil to gain Petroleum dice. For each oil barrel you refine, you’ll get one temporary Petroleum die. The fourth phase of Generate involves rolling energy dice to gain energy. Remember it takes energy to place workers and the second step of Generate made you discard all your energy! Dice are acquired as the game progresses. There are five types that vary in strength, ability and likelihood of pollution. You can roll zero, any number or all of your energy dice. The results determine the amount of energy you gain along with how much you’ll pollute your environment. Pollute is the final phase of Generate as determined by the color of the highest valued die rolled. Solar and hydro-geo dice do not pollute the environment, Coal and Petroleum cause some pollution while Nuclear does the worst contamination. Nuclear contamination is obviously the most difficult to clean up.

In addition to the achievement cards and structures, your environment is where your end-game victory points come from. The more polluted your environment, the less victory points you’ll earn. As I mentioned before, you’ll need to mitigate any damage by gaining efficient and friendly energy or you’ll need to spend time cleaning up. This can be achieved by selecting the Clean Up location on the main board or by activating one of the structures that allow for cleanup. It’s a difficult balancing act because you need energy to perform actions but can cause pollution to your environment every time you try to generate energy. 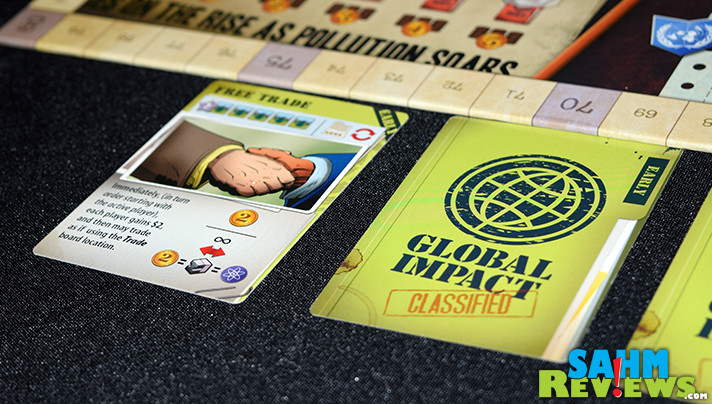 Throughout the game, pollution triggers Global Impact. There are a variety of cards in the game, but only six are used each time. This ensures that no two games are alike. Many games like this feel overwhelming to start with but are easier to comprehend when broken down into pieces and phases. I feel the weight and difficulty of the game is actually lighter than Manhattan Project which our 12 year old has been able to play effectively (and against adults) for a couple of years. With some explanation and assistance, kids as young as 10 should be able to play Energy Empire! As a bonus, the theme is perfect for teaching the cause and effect that comes with harvesting various types of energy.

You can pick up a copy of Energy Empire on Amazon for around $47 or direct from Minion Games. Feel the energy generated by Minion Games on Twitter and Facebook then check out their webpage for information on their other endeavors.

Which Manhattan Project game version do you find most interesting?