I was one of those kids who loved watching professional wrestling on Sundays while growing up. I couldn’t get enough of the WCW or the fledgling WWF. Our cable system carried TBS which also featured some other smaller wrestling organizations, but these two were the major leagues of the era.

My favorite even wasn’t the tag team matches or even the bloody cage events. For me it was all about the Royal Rumble. Twenty participants in a king-of-the-hill, last man standing battle. Sometimes for a championship belt, other times just for the prestige. Yes, I realize that for the most part the entire thing was scripted. But to a 12yr old boy, it sure was entertaining. 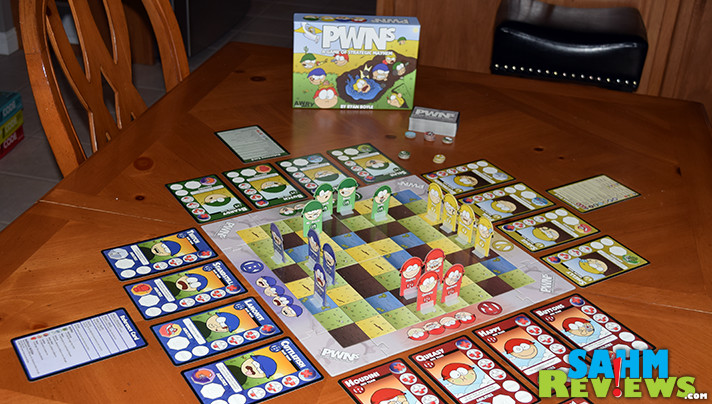 Maybe that’s why I enjoy board games that have some type of warfare. Whether it’s a game of Chess and capturing your opponent’s pieces, or a modern board game where taking an action prevents other players from making the same move, I tend to gravitate towards titles that offer this type of player interaction. That’s exactly what I found in Awry Games‘ new release, PWNs. 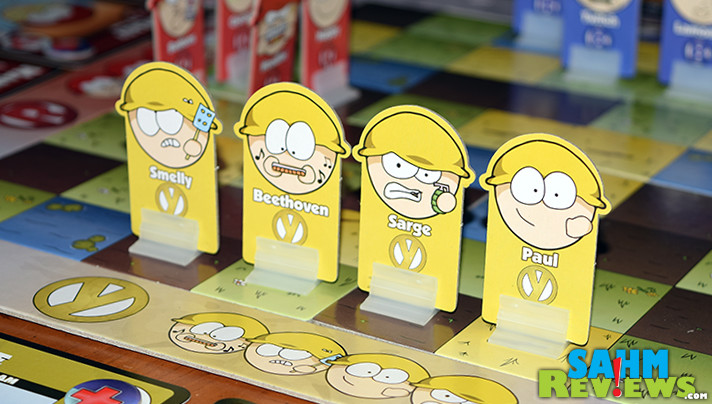 PWNs (pronounced ‘pones’) is what we would call a skirmish game centered around careless fighting and survival by any means necessary. PWNs isn’t the typical fantasy-themed fighting game – the artwork resembles something out of the TV series South Park, with characters with round heads and oversized eyes. These are the PWNs (think ‘pawns’ in Chess) and are as outgoing as they are expendable. 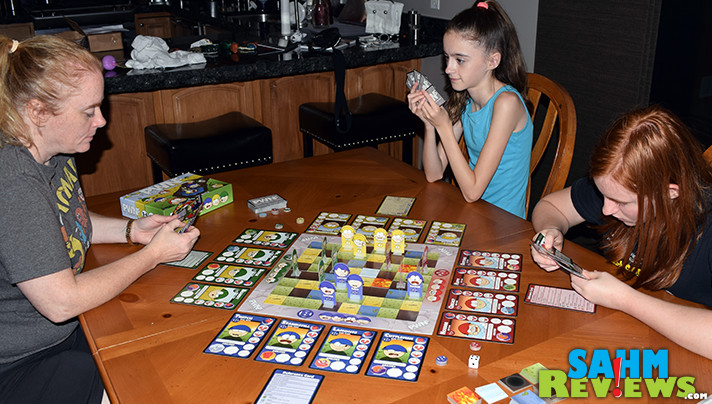 The playing area is made up of four double-sided “Mega Tiles”, which are randomly positioned in a square in the center of the table. All players manage teams of four PWNs which start in your “Home Area”. This is basically the first two rows of one side of the play area. You may put your PWNs in any four squares to begin, taking note of where your opponents are placing theirs.

Every turn contains three phases to resolve. First is the most obvious – movement. Your team may collectively move a total of three adjacent (non-diagonal) tiles, divided up between all of your team members. Pay attention to the squares in which you are moving. Hazards, such as fire and water, will cause you to take damage when you enter them. As does moving into another area already occupied by another PWN. 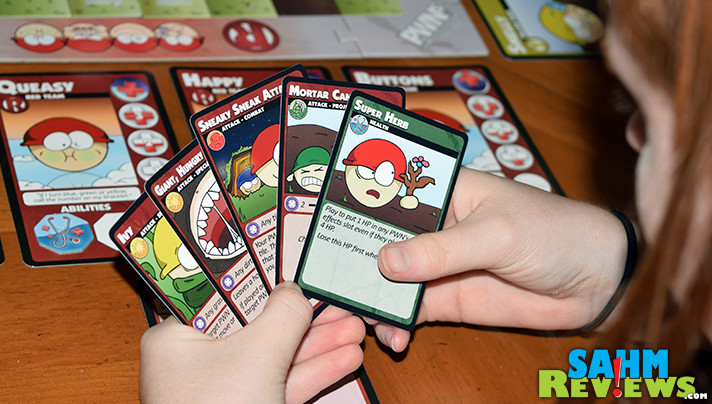 After all of your movements are completed, you may attack using an elemental or attack card from your hand. The cards themselves will dictate your method of attack, the range you have and whether it can pass through other occupied spaces before landing.

Lastly, you can heal yourself by playing Health cards. If you don’t like the hand you hold, you can forego any phase of your turn to discard one card and replace it with a new one from the top of the deck. At the end of each player’s turn, everyone draws cards to get their hands back to five cards. Then play moves on to the next player. 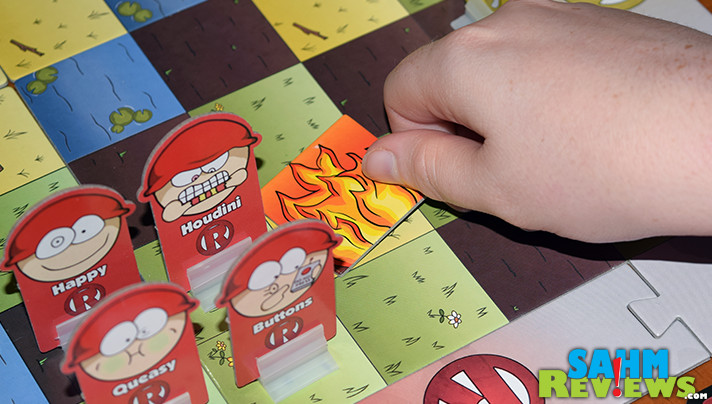 By our description it would seem that PWNs is a rather simple game. That’s not really the case. Sure, taking a turn is easy to teach and remember, but a LOT of things can happen along the way. The various terrains act differently when traveled over or an event happens to one adjacent (for instance, if a tile next to an ice tile ignites, the ice tile turns to water and any PWN on that tile loses 2 HP and must swim to the next available adjacent tile of their choice). 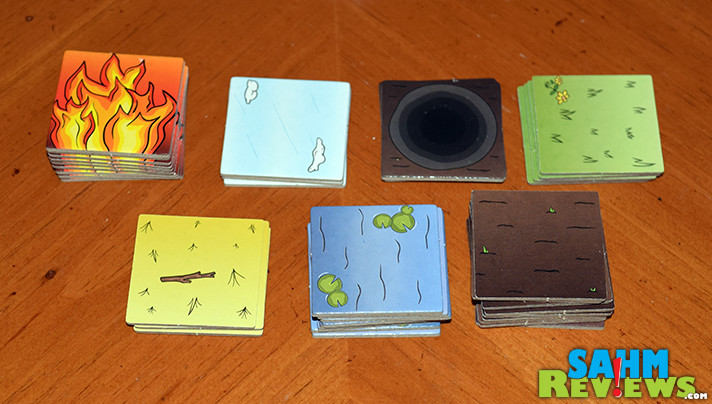 Special counters introduce Effects that must be resolved before normal play for that PWN can continue (poison, freezing, etc.). And combos are likely to occur when resolving an attack! As an example, an attack may push a PWN into another, that falls into the water. He must swim to an adjacent tile, but it unfortunately is on fire. And just hot enough that the PWN is KO’ed! 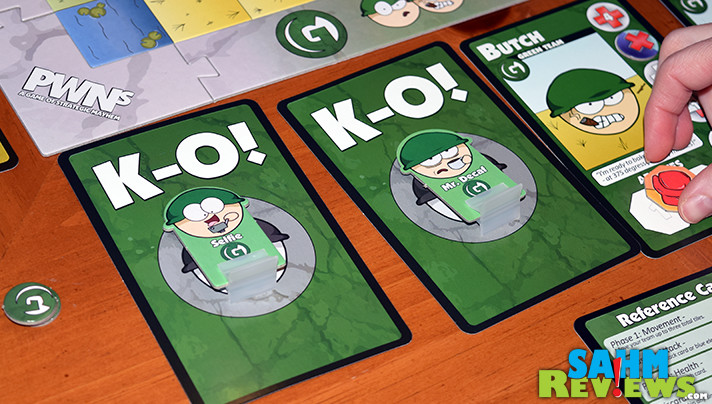 Each PWN also starts with a random ability, and can also earn a second by KO’ing another PWN and taking theirs. These might allow attacks to travel further, award additional movement during a turn or even be immune to all game effects! You’ll want to target those PWNs with especially-valuable effects to gain them for yourself.

Just like the wrestling Royal Rumble I mentioned, PWNs is a game about last PWN standing. Teams will be eliminated, but PWNs continues until there is only one team left. There is no scoring – the person who has a team member survive to the end is declared the winner!

PWNs is brand new to the market this summer after a successful Kickstarter campaign. You can now find it for sale on Amazon for around $30 shipped or direct from Awry Games on their website. Check out the add-ons also for sale, even one that allows you to draw your own cards to be used in a round of PWNs! And be sure to watch their social media feeds where they regularly post comics and coupons (Facebook, Twitter)!

8 thoughts on “PWNs Board Game Overview”