It’s a common complaint that we see the top of people’s heads rather than their eyes more now than ever before. It isn’t that they are shy or hanging their head in shame for some reason. It’s because they have their heads buried in a device.

We were way ahead of our time. In the late 90’s, we would walk around parks slowly and methodically, staring at the ground and oblivious to the world around us. With headphones on, we were patiently awaiting the beep.

Then we would dig.

And hope for something good.

The device we were staring at was a metal detector that my in-laws purchased for me as a Christmas gift. Although we didn’t find anything amazing, we took pleasure in each small discovery. Sometimes we found pennies or maybe some change that fell out of a pocket, but most of the time we found junk.

We found our latest metal detecting treasure without even leaving our home. I’m not sure how Scott stumbled across it, but we found the show Detectorists on Netflix. When he told me about it, I thought it was going to be a docudrama filled with unknown actors, but it only took a few steps into to show to discover Detectorists is pure sitcom gold. 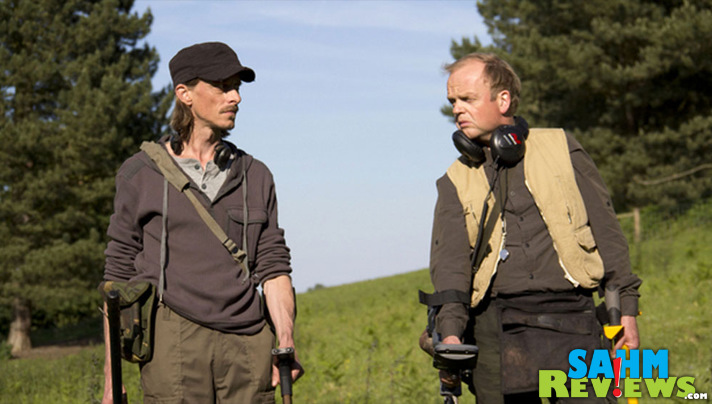 The first scene shows the main characters, Lance and Andy, out in a field doing what detectorists do: walking around staring at the ground in hopes of finding hidden treasure. As the camera focused on each person, Scott and I both had the same reaction, “I know that actor from something!” I couldn’t place Lance, but it didn’t take any time at all to pinpoint Andy as Ragetti from the Pirates of the Caribbean series. Yes, I know he’s been in a bajillion other things, but that’s what I recognized him from first. The only people who can make fun of my shortfall are those of you who are going to ask me to return my Marvel fanatic fan club card for not recognizing Toby Jones from the Captain America movies. Yes, I know… it’s shameful that I didn’t figure that one out sooner.

Throughout the series, we have continued to see familiar faces including David Sterne, Paul Casar and Simon Farnaby. I’m to the point where I keep my iPad handy during each episode just to search IMDB to find what else every character has been in. What I expected to be a low-key show has been filled with surprises.

So let’s talk about the premise of the show: metal detecting. Doesn’t sound very exciting, does it? It’s like watching grass grow. Thankfully, the show isn’t just a recap of them in the fields. It’s about their personal lives, their interpersonal connections, the people who try to claim jump and more.

Okay… I’ll admit I’m not explaining this well because that sounds boring. It’s not. It’s actually filled with a lot of deadpan humor. There have been multiple instances where we needed to rewind because we were laughing so hard. As an example, during a particularly down point in the storyline, Andy said, “It’s like the worst ever episode of Scooby Doo.” And multiple references to Paul Cesar and Simon Farnaby looking like Simon and Garfunkel has lead to ongoing “bridge over troubled water” one-liners.

There are some rules with metal detecting, but the two biggest are (1) Leave the ground the way you found it. When digging, you carefully remove the dirt then return it to the hole as you leave. (2) Garbage doesn’t go back into the ground. Collect it and dispose of it. You don’t have to be a metal detectorist or know any of the rules to find the humor in watching Lance and Andy consistently find junk.

…Because people buy junk on eBay.

And apparently watch it on Netflix too… and laugh.

24 thoughts on “The Search for Treasure on Netflix”