In the court of King Richard it was common for the knights of the order to amuse themselves and prove their worth in tournaments involving man-to-man combat. Typically tournaments were fought between knights of different regions. These contests often resulted in melees which were fought across the open countryside. The knights who outlasted or beat their opponents were declared the winners.

As the story goes, it is told that Sir Ludlow of Sherborne, tiring of the commonplace and eager for a new and more profitable challenge, offered a new opportunity to his fighting brethren. Twenty-four knights from each region would be selected to fight a mock battle within a specially designed area measuring 100′ x 100′. Restricting the fighting space would increase the challenge to the participants and also present an entertaining spectacle to the tournament gallery made up of lords and ladies of the kingdom. Knights could fight outside the area, but at least one member of each fighting unit had to remain within the space or the entire team would face defeat. When all knights of a unit were cleared from the Center Court, either through injury or cowardice, the fight would end.

Ludlow’s inspiration made the Battle of the King’s Court a traditional favorite. Later the conflict moved to the Halls of the King on a more symbolic front as chessboards were converted to King’s Court. Players young and old enjoyed mock battles which were inspired by the knights of old. 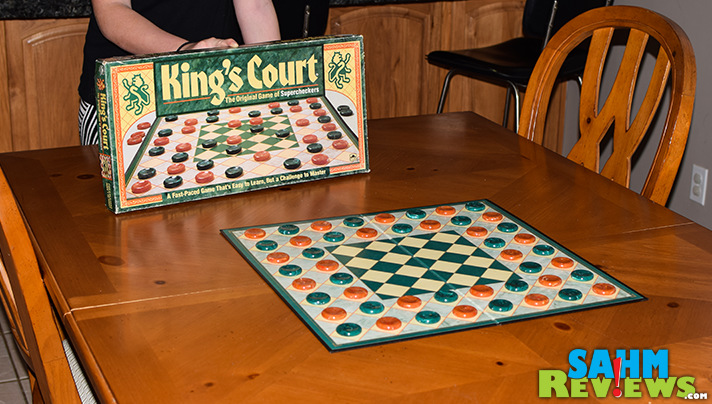 Again, so the story says. And that’s the claim of our latest Thrift Treasure find at Goodwill, King’s Court by Golden. Billed as “The Original Game of Supercheckers”, once we examined the components in the store we knew we had to add it to our collection of abstract games. 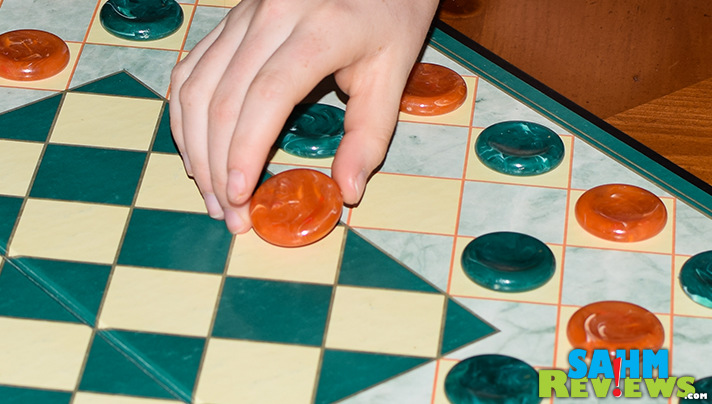 And King’s Court does a good job of paying homage to the tale from King Richard’s time. The board looks similar to a standard chess or checkers layout, with the exception of a few things. First, the entire board is rotated 45 degrees, so you are playing on diamonds rather than squares. Spaces are beige and light green instead of the typical black and white, and there is a noticeable area in the center of the board that obviously has different meaning.

You probably guessed it right – this is the tournament area. Similar to the battle arena in the story above, each player must keep at least one person alive within this area or be defeated immediately.

The entire outside area is set up with alternating colors surrounding the arena. Pieces move much like kinged pieces in Checkers, one space in any direction or jumping as long as there is a free space on the other side. Jumping is disallowed during your first two moves, and your very first move must be to get a piece into the arena (again, or be declared the loser). 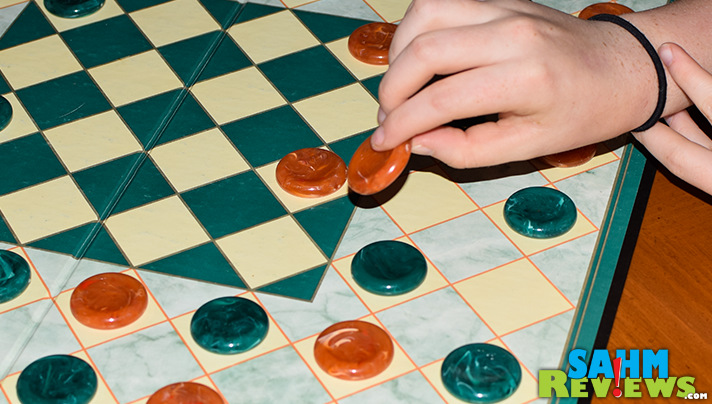 One major difference in how the pieces move is the ability to jump your own pieces. You can jump multiple times in different directions, over your own or your opponent’s pieces. Each time you jump an opponent, their piece is removed from the game but yours are not. 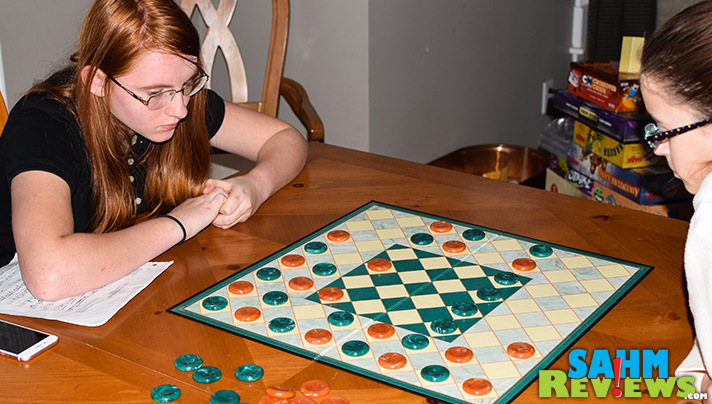 And rather than a last man standing win condition as in Checkers, King’s Court simply wants you to eliminate your opponent from the arena. This might happen very quickly or very well could last until there are only a couple pieces left (not very likely).

I was honestly surprised at the quality of the game pieces, a hard plastic with serious weight made to resemble alabaster or marble. It appears that this version was only issued once in 1989 and had appeared previously a couple other times under the name “Supercheckers”. You can still find copies on eBay for semi-reasonable prices or keep an eye out at your local thrift shops for a copy at a discount. If you’re a fan of abstract games, this is probably one you’ll want to hunt down!