Monster trucks have been around for years. I’ve seen them on television and read about them but have never seen one up close – unless you count the redneck trucks we see when we visit my mother-in-law in Alabama. As we mentioned earlier this month, we were excited to attend Monster Jam.

I kind of had a preconceived notion about what the event would be and all I can say is I was completely off base. My impression was that the event revolved around monster trucks driving over other cars and crushing them along the path. What we actually got was a whole lot more – and different. To start with, there were ATVs. These guys were like the intermission between the other events, coming onto the track and racing around the perimeter. They named the colors after the various cities in our metro area so we would have someone to cheer on but honestly, we couldn’t understand a word the announcer said so there wasn’t a lot of cheering going on. Nonetheless, it was cool just to watch them zipping around the track… and occasionally wiping out. 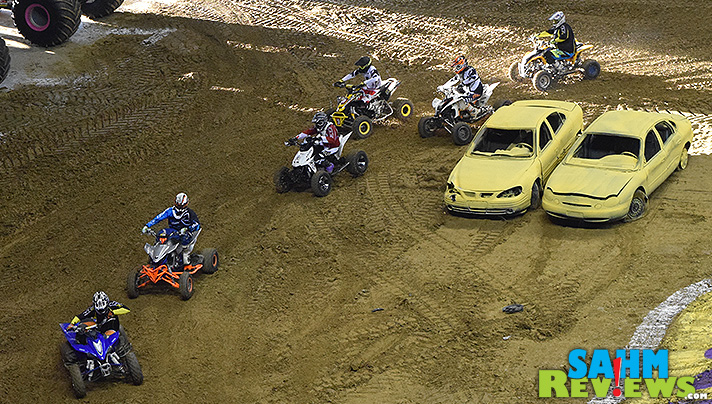 The monster trucks were the featured presentation but were presented in various rounds of competition. The first involved freestyle jumps over the obstacles in the arena. Seeing them fly through the air was pretty amazing although it seemed kind of unnatural though… like watching turkeys take flight. This is a far cry from watching them crush vehicles but extremely entertaining. Scores were tallied based on how they did as part of the ongoing competition for the evening.

We received media tickets to the event so we didn’t get to select our seats. When I picked up the tickets right before the show and saw we were nosebleed – literally only five rows from the top/back, I was extremely disappointed. What I discovered, however, was that a show like this is big and bold and the cheap seats offer just as good a show as the more expensive ones. The primary difference that we noticed is that when the drivers come into the stands in-between events, they typically focus on the lower bowl seats. You may notice from the picture that we didn’t have any kind of ear protection… we were obvious rookies. Of all the people sitting around us, and I mean ALL, we were the only ones without earplugs or headsets. When all the trucks are running simultaneously, it gets pretty loud. DH held up his two index fingers and said we had built-in earplugs if we needed them.

One of the next competitions involved pairings of the trucks racing around the track. They started on opposite sides and the goal was to be the first to cross their respective finish line. This was pretty dazzling to see since trucks moving over obstacles at a fast speed can mean someone tipping over. 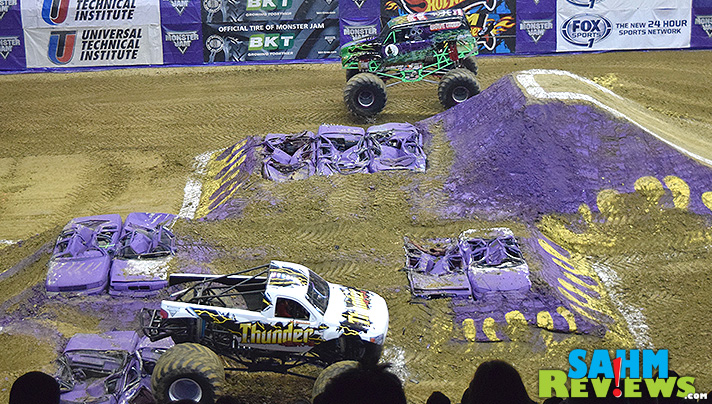 As I mentioned before, the monster truck events were broken up by entertainment like the ATVs. One of the coolest sideshows involved a team of stunt cyclists. They took off from one ramp and performed a trick before landing on the platform on the other side. They stood up, they spun around, they tilted sideways and even did this superman move. As you can see from the photo, they also went upside down. I could have watched an entire show of those guys flipping tricks. 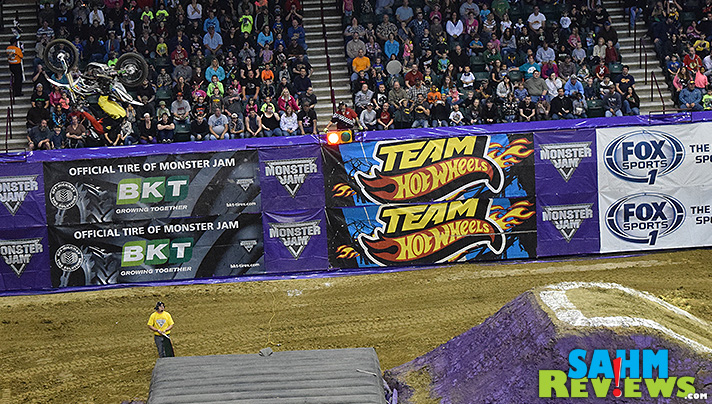 But the monster trucks took center stage throughout the night, continually working on their competition to see who was the best. When I say it was a contest, I use that word loosely. Don’t go into it thinking it’s a true test of the merits and quality of the drivers and their vehicles because personally, I don’t think it is. To me, the whole thing had a feel of pre-scripted WWE or even the storytelling of Medieval Times Dinner & Tournament. It’s about the entertainment value. 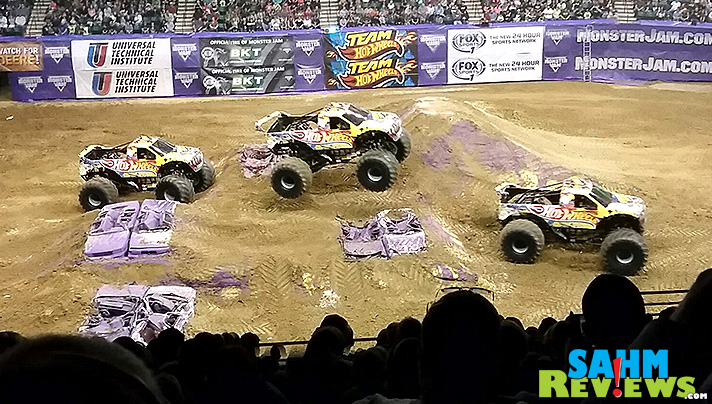 Each truck had different features and characteristics as well as a persona. There was something for everyone. I was cheering for Wolverine because, well, it’s Marvel. I thought the girls would cheer for Madusa since the driver was a woman and the vehicle was Pepto-Bismol pink. I was certain hubby would cheer for Hot Wheels but ultimately, I think we all ended up cheering for Grave Digger. I think it’s because he was such a showman… an absolute entertainer. 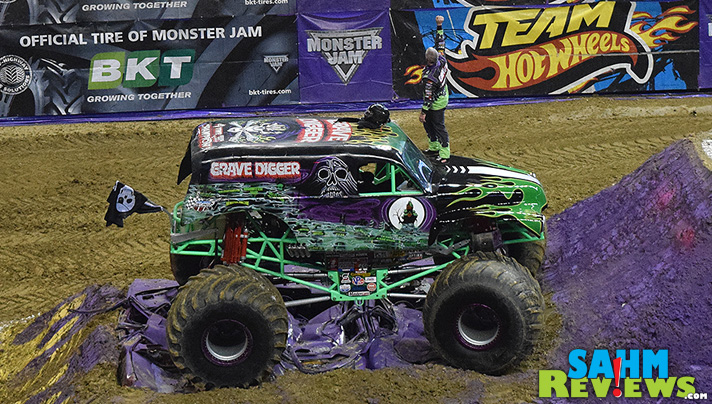 This event is entertaining for adults and kids alike so I highly recommend you catch them when they come to your area. We provided our readers with a Monster Jam discount code prior to the event so I encourage you to search for coupons before purchasing your tickets. Visit the Monster Jam website for tour dates and locations. You can also keep up to date with them on Twitter, Google+, Facebook and Instagram.

Have you ever seen a monster truck up close?

The Search is ON for the Legendary Gamer!