Like most of you I joined Twitter a few years ago. Many of you probably have thousands upon thousands of followers. Me? Triple-digits. (Obligatory FOLLOW ME request…). In all honesty, for the first couple of years I really didn’t use Twitter. I had named my account in jest to lament the long winters and lack of entertainment in our current state, and I had a dozen or so followers; most were “egg” accounts. I really didn’t care since my wife was the social one and I was only providing back-end support for her blogs. But as I began writing more and more for SahmReviews, I began to gain some following of my own. Sadly, I really still didn’t use my account as intended – I became a tweet-and-run kind of person.

That is all going to change now with the news I heard the other day.  Amazon.com and Twitter have formed a first-of-its-kind partnership that will allow you to add items to your cart by using a custom hashtag (#AmazonCart) and never leaving your Twitter feed!

It is amazingly simple, even for this Twitter novice. My daughters have been bugging me for Disney’s “Frozen” since they heard it had been released on Blu-Ray. A quick check of Amazon’s movie Twitter account yielded exactly what I was looking for. 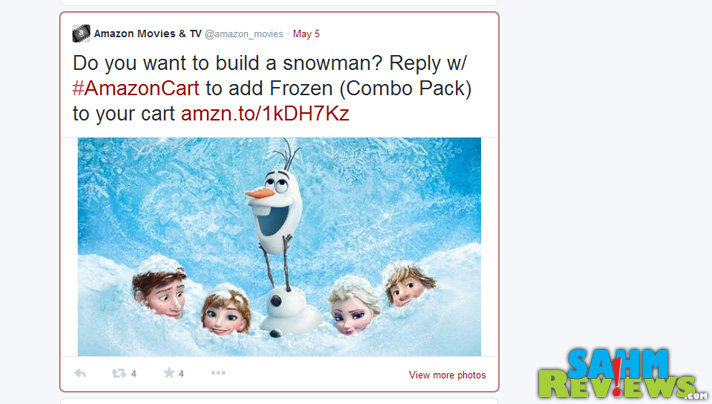 As instructed, I composed a quick reply and included the #AmazonCart hashtag to trigger the magic. 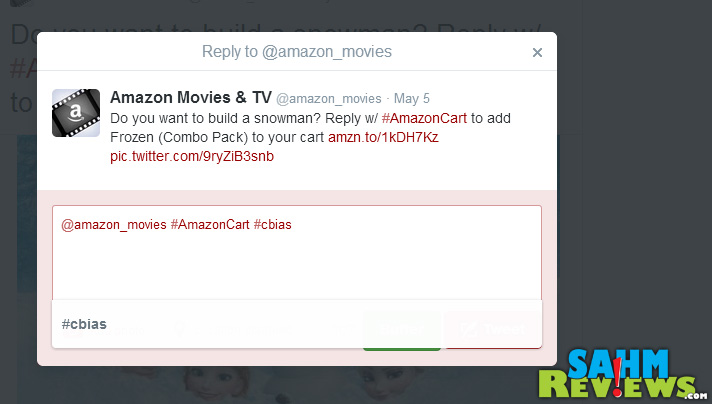 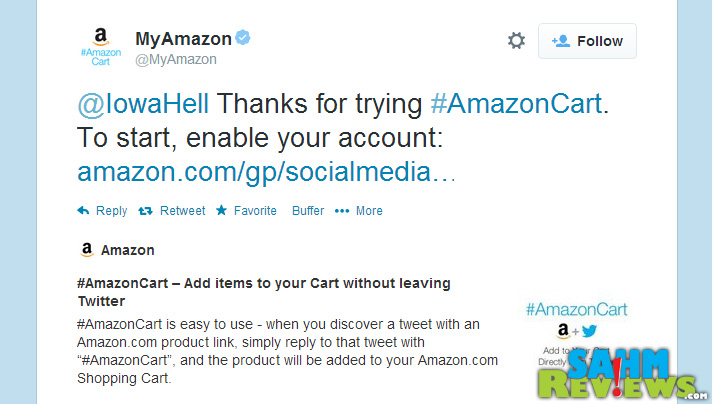 Obviously I was a first-time user of this feature (as is everyone), so an extra step was necessary to confirm I wanted this added to my cart on Amazon. 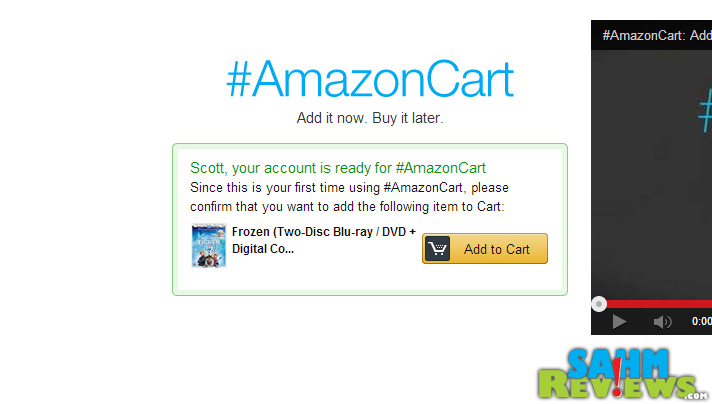 From there, purchasing the DVD was business as usual. Replying to the tweet didn’t obligate me to purchase the movie, it just added it to my cart. I could have continued shopping on Amazon (or Twitter), but I was ready to get Frozen on its way to me. 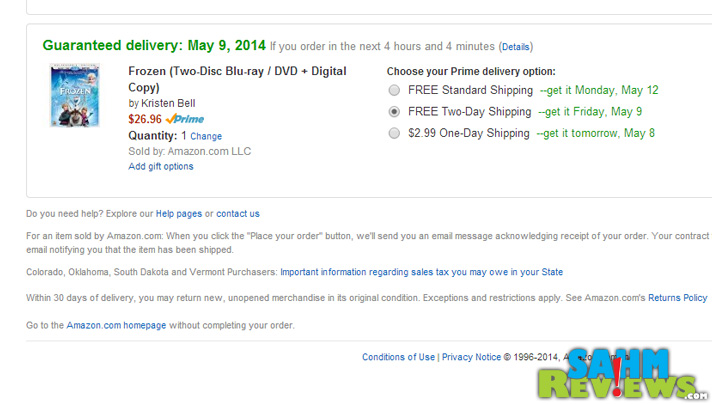 Did I mention I love my Prime membership? Free 2-day shipping meant it would be here by Friday. Sure enough, right on time for the weekend!

Now here’s what I think is cool and could potentially be a game-changer. I love to shop on Amazon and I’m sure you do too. Sometimes I just want to browse, just like walking through a department store to see what catches my eye. Amazon does a decent job with its “recommendations”, but regardless of how good the AI is, it’ll never be perfect. I can see independent users creating curated lists of their own that would allow me to shop very specific categories that are of interest to me.

It also is a great way to share the interesting items you find on Amazon. Just tweet a link to any product and your followers can also purchase it directly via their Twitter account. For me there is a huge downside though…I now have to start religiously reading my Twitter feed! I wouldn’t want to miss a great deal!