There are definitely things that should never see the light of day.  I’m referring to the black, gooey, spongy, twisted ball of yuck I pulled from our daughter’s sink. Here’s a preview – notice the solid-looking mess in the drain itself!  It’s a wonder it didn’t crawl right out on its own!  Using a work flashlight you can’t even see down the drain!

Crawling under a sink isn’t my favorite thing in this world, and trying to hold a flashlight while turning a wrench or screwdriver is an Olympic sport in itself.  I have a good ‘headlight’ to wear, but the design of it leaves a lot to be desired.  Not only does it protrude out nearly 3.5″ from my forehead, the design of the swivel lends itself to be bumped and moved rather easily.  Not what you want to happen when you’re upside-down staring directly into the eyes of a drain monster.

I picked up a new work headlight by Energizer at our local Walmart specifically for this project.  The bright headlight in a compact design was THE major selling point for me. The particular model I chose has a spot light, a wide light and a night-vision light (red LED’s that should be easier on the eyes).  I see the night-vision feature coming in handy at Halloween!

We cleared out everything from under the sink and prepared to do battle.  It’s amazing how well the spotlight feature lit up the work area. 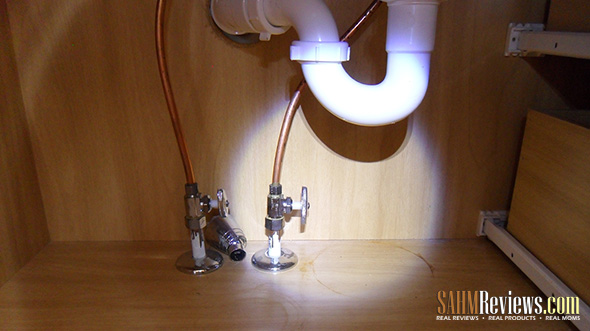 With the trap removed, the fight began. My weapon of choice? A long Craftsman screwdriver. The drain was nearly completely full of this gunk, each chop of my blade causing chunks of the clog to drop down onto my hand and below. 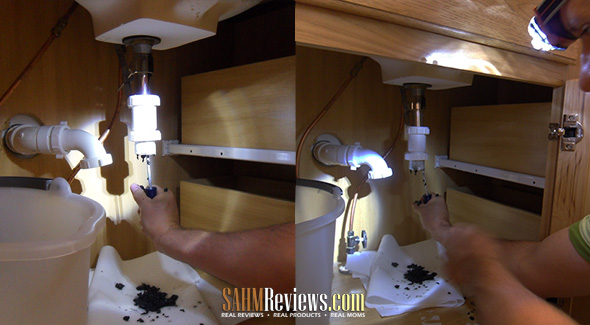 Eventually enough was removed to start running water through the drain again in the hopes of getting every last bit of it out of there.

That did the trick!  Since it is near impossible to show you a photo of a working sink, you’ll just have to use your imagination.  Here’s another issue you’ll have to imagine since I didn’t want a photo of it making its way around the internet – the Energizer Headlight is very comfortable, maybe too comfortable.  I tightened the strap to make sure it stayed put, but upon removing it I noticed the padding on the back of the light has little cutouts (presumably to allow for better breathing and sweat collection).  What I didn’t realize is I was now walking around with an “adorable” (according to my wife) waffle pattern on my forehead!  Yeah…not going to post that photo…  But it’s a small price to pay for a working sink!  Now to figure out how to get to the bathtub drain…

For more information about the Energizer Headlight and their #LightMyWay campaign, be sure to check out their Twitter and Facebook pages, or visit their website directly!

Home Security Without a Contract

How to Wall-Mount a VIZIO P-Series TV

6 thoughts on “Energizer Bunny vs. The Drain Monster”