It isn’t nice to say something negative about your own child, but I’m going out there and doing it. My oldest daughter is bright but prone to rejecting things unless she knows she’ll be successful.

No matter what it is – food, game, toy, activity – she’ll usually turn it down before giving it a chance. I guess everyone does that to some extent, but we have watched her turn down things that we KNOW she will love or enjoy simply because she isn’t familiar with it.

As an example, it was like pulling teeth when we told her to try fudge at the buffet.  Once she finally caved and tasted it, she realized how good it was.In some cases, she tries things but just prefers something else.  We’re okay with that (for the most part) because at least she made an attempt.  Like riding a bicycle – it isn’t her cup of tea.  She would much rather be zipping around on the Fuzion four-wheel scooter she got for Christmas or even trying to master the skateboard she received on her last birthday.

So imagine my surprise when she didn’t want to try the new Shox Scooter by Shred Sled.  She loves to scooter around but she didn’t want to even try it.  “It’s too hard.”  “There are only two wheels.”  Well, of course it isn’t going to be easy if you don’t ever TRY it.  Give it a shot and if you don’t like it then fine.  But you have to at least try it.  You would think I’m forcing her to eat liver and onions.  Sheesh.

Sheesh.  Sooo not looking forward to the teenage years.

Guess what happened.  Once she tried it, she realized that she really liked it.  Yes, it’s only two wheels but it isn’t like a bicycle where the difference between two wheels and four wheels means scraped knees.  Sure you might tip over but your feet are pretty close to the ground with very little in between to keep you from landing, well, on your feet.

What’s so different about the Shox Scooter?  The base of it, the part that you stand on, isn’t just a flat board like a modified skateboard.  It has a built in spring-y thing-y.  Yeah, it’s probably a shock absorber hence the name “Shox” Scooter.  But I have no intention of getting all technical like that on my blog.  At least not today.  When I look at it, I think of those clicker toys that we played with growing up that you.  Am I dating myself age-wise or do kids still play with those? Nevermind.  Basically, it’s bouncy.  When you watch kids doing tricks with their skateboards and scooters, they tend to ‘hop’ them to be able to do various tricks.  The Shox Scooter has the spring built in to make doing tricks even easier. 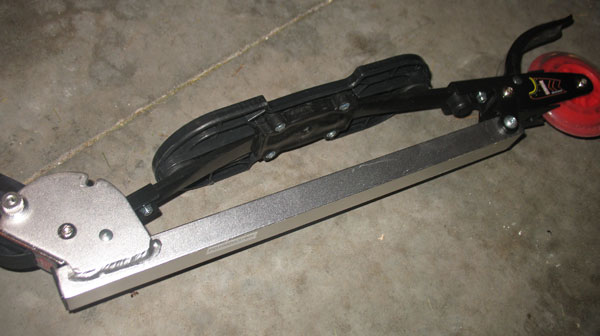 Bah.  My skills in explanation are just not doing this product justice!  Let me just show you a video. 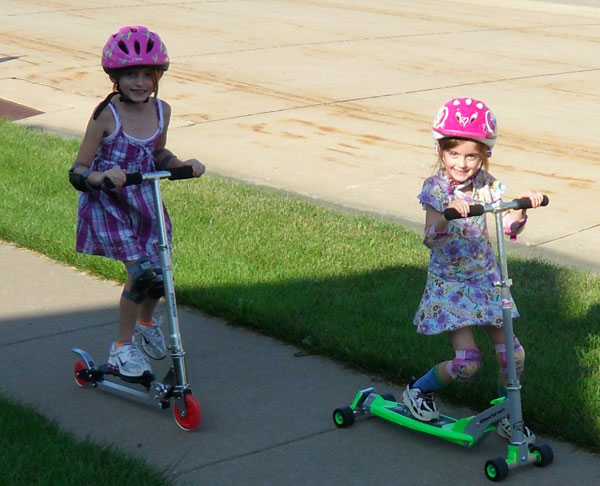 The Shox Scooter was a piece of cake for Miss M – and even for Miss K.  We found that they were able to maneuver it better than the 4-wheel alternative that Miss M had been using.  Miss K still prefers to stick with her safe (and pretty) princess scooter for now but was very happy to have the option to upgrade if she wanted to.  As they continue to see kids their age flying around the block on two-wheels – whether bicycle or scooter – I imagine they’ll be fighting over who gets to take the Shox Scooter out for a spin. 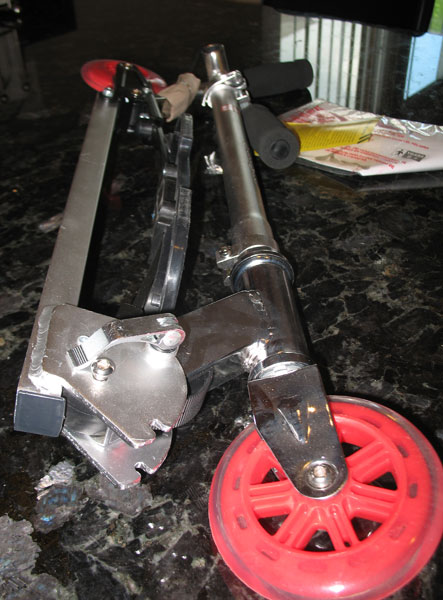 It’s made out of durable materials but does have weight limitations of 110 pounds.

As for storing it.  It folds nicely to make it easy to transport or store.  Heck, I think it would even fit in their locker at school!