“I am tired of changing stinky diapers!” I sternly told my soon to be 3 year old, Little Miss A.
“But Mama, I have an idea! I can go upstairs and you won’t smell it!” exclaimed A.

“No sweetie. I would still have to change your diaper and smell it. And, we have another problem. Mama doesn’t have any more money to buy more diapers.” I explained.

“I know! I have money in my piggy bank.” she resolved hoping that I would consider that.

“No sweetie.” I sadly remarked.

“Maybe Daddy will buy them.” she softly uttered.

I’ve been trying, inconsistently, to potty train Little Ms. A to go poo poo in the potty since she was about 2 years old. She quickly learned how to “pee” in her brand new pink training potty that Grandma bought her, but that is as far as I could get. After months of so many bribes with princess dresses, candy, chocolate, huge pink and purple bouncy balls, a tea set, and Candy land, she still wouldn’t go poo poo in the potty. I gave up when she started telling me she wanted a diaper to go poo poo and when she started holding it. I gave up when we would pick her up kicking and screaming as we sat her on the pink potty. Little Ms. A just wasn’t ready. She put up a big fight for a long time. I was so envious of my friends that were able to potty train their toddlers in such a short time and in such effortless ways.

What was I doing wrong? Was I giving in too much? I didn’t want my Little Miss A to wind up in the hospital getting an enema. I didn’t want to force her either. She tells me she is scared of the poo poo.

Wednesday was the Big Important Day. We woke up with a positive attitude. This day was the day she was going to go poop in the potty. Miss A didn’t know that it was really the Big Day. When it was “time,” she sat down in the little pink potty and I sat on the floor reading my Reader’s Digest. We did this for an hour. I let Ms. A pick any candy she wanted from the year old Halloween candy we had in the Tupperware jar. She picked out some laffy taffy and sucked on this while we both sat there doing our thing. Not even a push. I gave up again.

But I didn’t want to give up. I gave Ms. A a snack and the urge came back! We went back to the pink potty, but she wanted to sit in the big girl potty this time. I gave her a huge hug while she was sitting on the big girl potty and with all the screaming and crying, she went poo poo in the potty!

“Look at what you did!” I screamed. Little Ms. A was crying and laughing at the same time. She couldn’t believe it either. She had to take a peek. We put on her brand new blue princess dress that she had rejected so many times. She ate a half eaten candy cane from the Christmas prior, we put a happy face on the cartoon calendar that Daddy brought home, and more hugs and kisses were exchanged. It was a celebration well earned. And as if presents weren’t enough…. 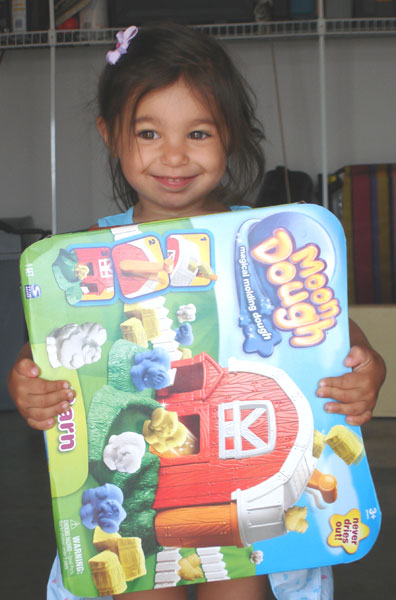 The Moon Dough miraculously was brought to my door!! It was perfect timing. We were in essence, having a Poo Poo Party. We played with it the next morning after taking the Moon Dough for a walk with us.

“Can we take my favorite toy with me?” she asked.
“Which one?” I inquired.
“That!” as she pointed to the Moon Dough, that was sitting on the buffet table.
“We could put it next to me.” she instructed.
And so we went on our walk with the Moon Dough.

Once we opened the box, with excitement, Little Ms. A couldn’t wait to get her hands on the dough. She didn’t let me squish and squash the dough to get it ready for her. She wanted to play right away. As she played with the dough, I assembled the barn together for her. It was very easy to put together so she could get right to it. I was pleased with how quickly the assembly process went. 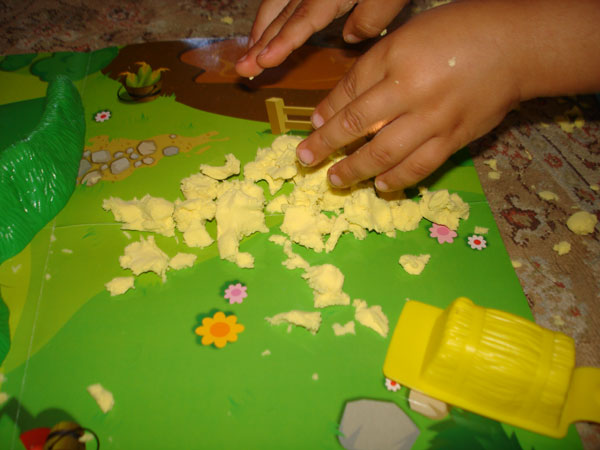 The Molding Barn Ramp and Molding Play Mat, however, looked very large in scale to what it actually is. I wasn’t sure if I had the correct ramp, but it worked. All the contents were available and easy to identify. To whatever extent, the Play Mat is not actually a play mat. It’s a small (15 ½” x 11 ½”) piece of cardboard for the barn to sit on.  As you can see from the video and photographs, keeping the dough contained in this small area wasn’t possible.  For that reason, I recommend for anyone to read the Helpful Hints before playing with Moon Dough. The Moon Dough is very crumbly and even after squishing and squashing it, the dough quickly crumbles to pieces, very different from Play-Doh. We should have used a large sheet like suggested. On the other hand, the dough is very easy to clean up compared to Play-Doh. I thought I was going to have to vacuum, but a quick sweep did the trick. A comb or brush is recommended according the instructions. 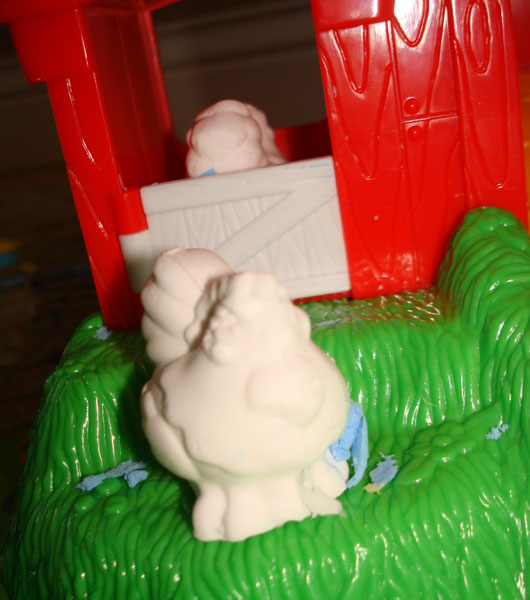 There’s one thing that I found somewhat frustrating about Moon Dough.  The instructions.  Why do they call it “Molding” as in “Molding Barn Maker” and “Molding Barn Maker Handle?” Would have made more sense  if the “Molding Barn” was called the “Molding Animal Maker” or something to that effect. I was looking for the animal molds everywhere. It makes sense when you look at the picture on the box. The “Barn Maker” doesn’t make barns; it makes animals. 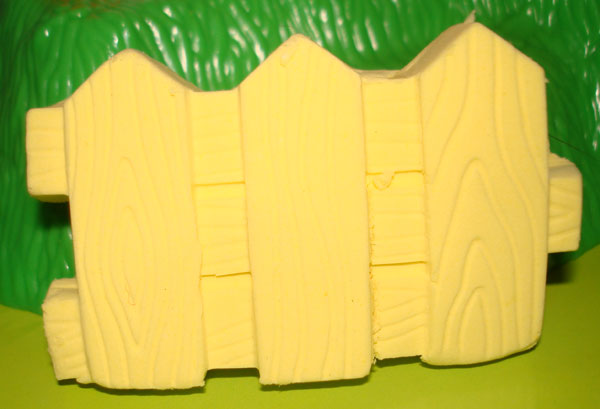 The pictures on the box show molded hay bales being dropped into the animal molds on the barn. I didn’t understand if that is what we were supposed to do. The instructions don’t mention that idea, rather, that you choose a color of dough and fill an animal mold. This is what we did and the molds did come out quite well! Little Ms. A was able to create a mold all by herself. She was able to use the handle easily. Creating the hay bale and fence mold was easy to use. The hay bale was a little trickier because a three year old may not have the ability to twist the plastic mold to make the dough come out. If you bang it on the ground, it will come out though.

Little Miss A had fun regardless of the instructions for that matter. She loved creating her own animals and holding the soft and light Moon Dough. She was excited when she saw the finished product; the molded animals, and would show me what she had done with such joy. 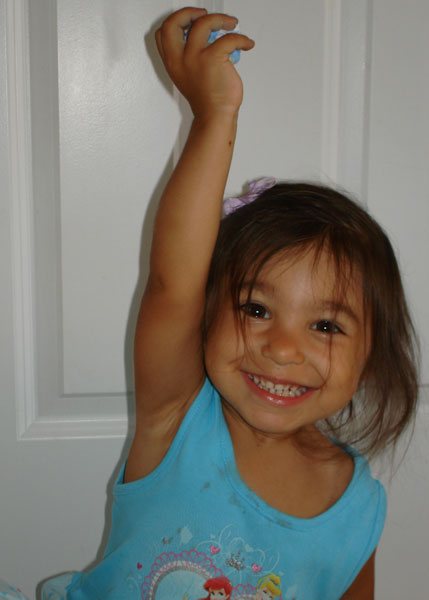 She’d hold the animals up and felt proud of what she had done. Just as how excited and proud I was when I saw that she went poop in the potty.We both accomplished something in the past few days.

At least I think we did.