It’s a rite of passage… toothpaste on the mirror.  Not a gob or even fingerprints.  I’m talking full-on toothpaste graffiti.  Across the mirror.

And now my kids are among the adults and children initiated into this select group.

It’s not just any group.  It’s a group comprised of people who are concerned about their teeth.  We’re Sonicare fans.  And splattering toothpaste across the mirror is something that every Sonicare owner I have talked to has done at least once.  Usually the first time using a Sonicare toothbrush before you realize that you can’t use a Sonicare toothbrush with your mouth open. 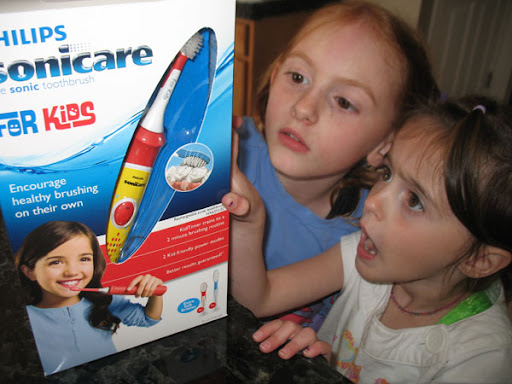 I own one, my husband does too.  As do my parents.  All of us had toothpaste graffiti.  So when we received a Sonicare For Kids toothbrush, I laughed when the girls shot toothpaste across the mirror.  Welcome to the club, girls.

Before I go any further, I want to talk about Sonicare… I’m a firm believer in it and have touched on it here before.  Most look at it and lump it in with other electric toothbrushes.  But just because two toothbrushes need to be plugged in and charged doesn’t make them equal.  A Sonicare, in my experience, is superior to other rechargeable toothbrushes!  I’ve been a fan ever since receiving a Sonicare as part of a BzzAgent campaign several years ago.  I’ve wanted to get one for my kids but the price has always been an issue.  I just couldn’t justify spending over a hundred dollars for each of the girls for a toothbrush no matter how good it is.  The little things like what happens when they drop it.  No matter how careful a child is, it’s a no-brainer that the item is going to get dropped.  Duh.  I tabled the idea of providing them such a tool until I felt they could be more responsible.

How well do they brush?  My dental hygenist said that I need to continue to brush the girls’ teeth for many years.  Kids don’t do a good enough job.  The pediatric dentist, however, disagrees.  He said that kids CAN brush on their own once they’re able to actually do it.  To determine if they’re doing a good job, get some of those tablets or the ‘mouthwash’ that shows the places they are missing.

So along came Sonicare for Kids and it addressed two main issues that I’ve had.  First, the composite of the toothbrush is actually very different than that of the adult.  The mechanics are the same but the casing is more durable.  Woohoo!  I don’t need to cringe about whether the girls are handling a tool that’s designed for an adult.  The Sonicare for Kids was designed with kids in mind.  Second – the toothbrush helps kids learn the proper way to brush and for the correct duration.  Not only does it have a timer but it also divides the time into four segments so kids know to stay in one section of their mouth until the chime tells them to move along. 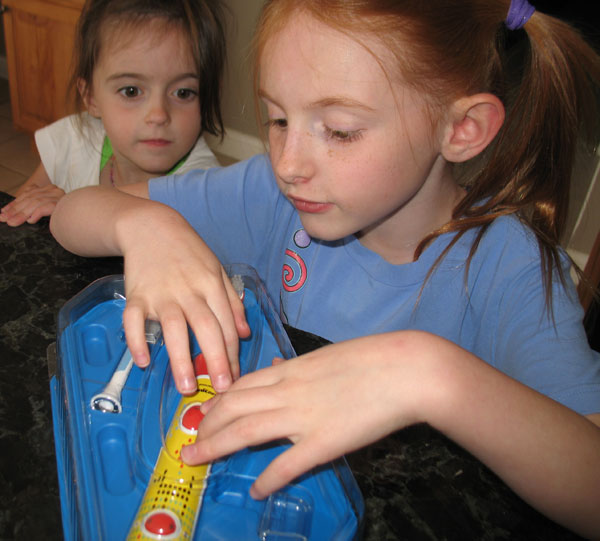 Aside from the previously mentioned timer, there are two separate brushes.  One for ages 4 and up and the other for ages 7 and up.  Not only is one brush smaller – to accommodate a smaller mouth – but it also uses a different timer and mode.  DH refers to a Sonicare maiden voyage as putting a bunch of bees in your mouth.  At least with the modified modes for kids, this isn’t quite as extreme.

How does it look?  Well, it has to be plugged in… It’s not a battery operated toothbrush, it’s a rechargeable.  Thankfully, the charging station is simple and has a docking area for the handle as well as two separate brush heads.  The main unit also has a few different decorative covers but we opted for the plain one. 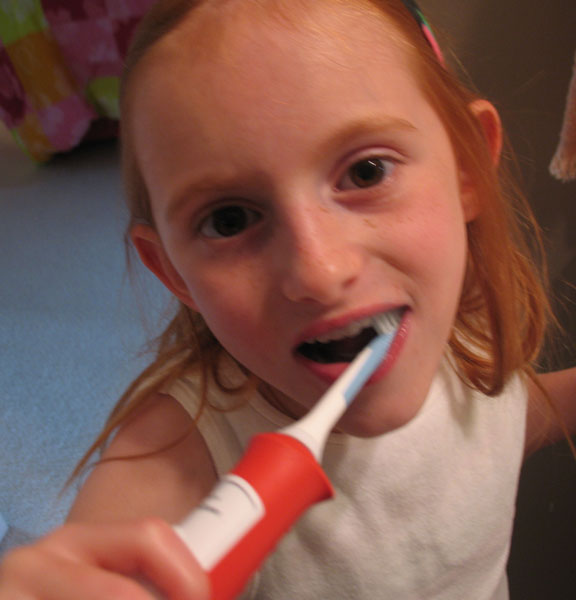 So what did the girls think?  They loved it.  It’s a fun way to brush and they like the music helping them along.  Anything that encourages good brushing habits is fine by me.  What did I think though?  Honestly, I was biased before I even received it.  Sonicare has been a household name for us for a while so I walked into the review knowing there would be little – or nothing – that I disliked.  We used it for a weeks with the girls brushing by themselves in the mornings and me brushing at night.  The girls loved doing it themselves, but using a brush that required them to keep their mouths closed made for a tricky two-person brushing experience.  It’s harder to feel exactly where the teeth are in some else’s mouth so I often would have to hand off the brush to them to finish up.  It’s not something I was comfortable with. 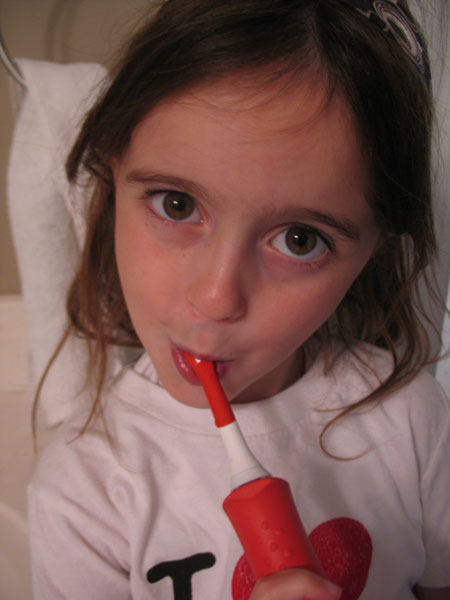 Then today, I purchased some of the tattletale mouthwash to see how much plaque was building up in their mouths.  The kids swished it in their mouths before brushing and it was supposed to make their teeth blue in places where they needed to focus their brushing.  (Un)Fortunately, the Sonicare for Kids has been doing such a great job that there was very little blue to be found after using the wash.  I’m more confident in handing the brush to them at the beginning and saying ‘It’s all yours.”  They liked that too.

As a bonus, Philips kept the price-point within reach.  At just under $70, it’s a great investment.  And at that price, you receive two brush heads!Just for reference, I’ve known about the Sonicare for Kids prior to actually receiving it – I read about it on a friend’s blog and drooled about wanting one for my girls. My kids do an okay job of brushing but there’s always room for improvement.  Even with a timer running on the counter, getting them to brush for the entire time is a challenge.  At one point, we purchased goldfish as a reminder that they needed to brush their teeth at least twice a day.  “You can feed your goldfish right after your brush your teeth.”  Silly, I know but it helped.  At the time, I sooo wanted a Sonicare for the kids but I just hadn’t committed to purchasing it.  I was extremely excited to participate in this blog tour to help me realize that I was talking myself out of purchasing a Sonicare until the girls were ready.  When I really should have rushed to the store when I first found out because it would HELP the girls develop great habits before they developed poor ones!

Now, I’m glad to say that everyone under our roof belongs to the Sonicare fan club – with the toothpaste  splatter initiation to prove it.For more information regarding Philips Sonicare products, visit their website.  Already a fan or want to know what fans are saying?  Check them out on Facebook.

4 thoughts on “Toothpaste on the Mirror”