Ever since my mother-in-law got her new answering machine, it’s been stuck with messages on it.  People who have never been to her house before graciously point out to her that a message is waiting.  My MIL’s not one of those technologically challenged people, either.  She has messages stuck on her answering machine because she wants them there. She proudly says “I know, thank you.  It’s my grandgals. I don’t delete those so I can listen to them whenever I want”  It used to only be one message… then two.  I think she’s up to at least three now.  Most get deleted but not those.

The first of those messages is a few years old.  She’s going to freak out if her answering machine ever breaks.When MomSelect (BSM Media) mentioned in one of their newsletters that Grandparents.com had developed an online service to send voice greetings via email, I immediately responded. “Tell me more, tell me more. I think it’s perfect for my mother-in-law!” 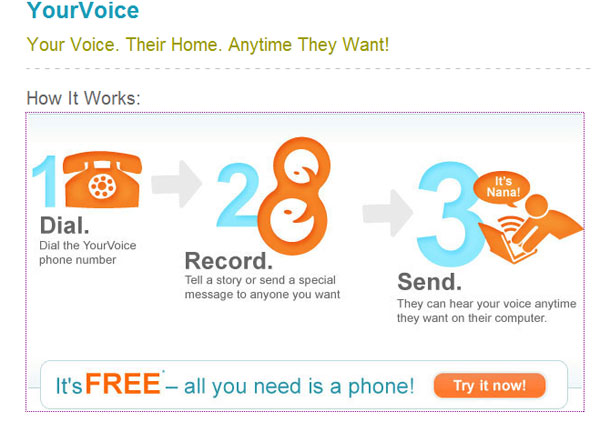 How does it work? With phone in hand and computer at your fingertips, log onto “YourVoice” at Grandparents.com and dial the designated phone number. It’s an automated system so just listen for the prompts.  To begin, you enter the pin number displayed on your computer.  Then it tells you to record your message. 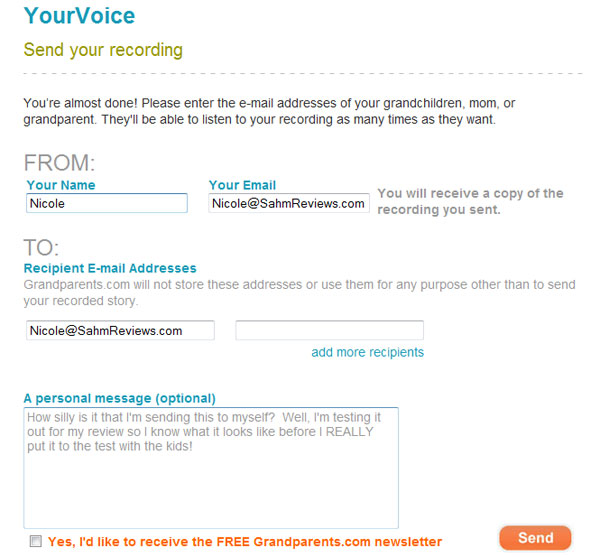 When you’re done, it even tells you to return to your computer and hit the “I’m done recording” button on the Grandparents.com page.

The next screen looks just like a standard web-based form for sending email.  You fill in your name exactly how you would like it to show up on the letter to your recipient, you enter your email (use a real one so the recipient knows that it’s not spam), enter the recipient’s email and, if you choose, a message.  That’s it.  Done. Couldn’t be easier. 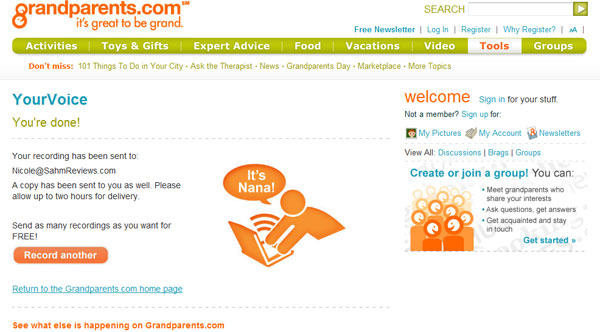 Lickety split, your voice recording is on it’s way. When I did my first sample, I was pleasantly surprised at how quickly it arrived in my inbox.

Rather than selecting a recipient, I selected my own email for both the sender and recipient so I could see the difference in the emails.  The  “from” address on the recipient email was the email you previously entered.  By utilizing a familiar address, the YourVoice message is less likely to get sucked into a spam filter.  The email was titled “You have received a recording from Grandparents.com!” and within the message, it displayed my name, just as I had typed it on that ’email’ page. 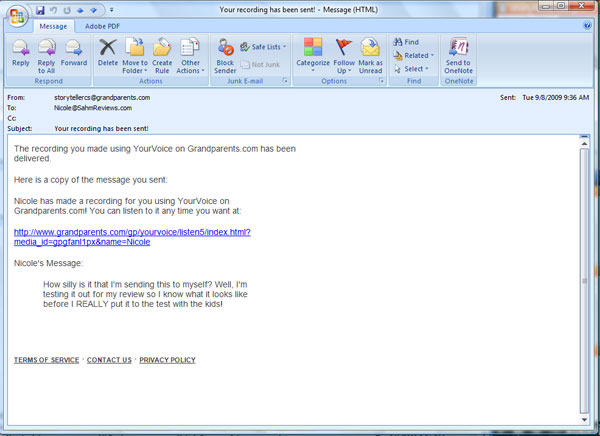 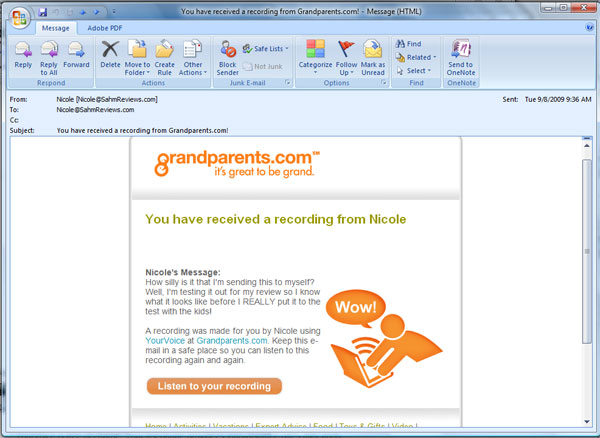 The link included in each email took me to the same place on Grandparents.com.  From there, you just click the play button and listen to the message.  As many times as you want.  But it’s more reasonable to just download it, in my opinion.  After all, if you just wanted to leave a message that would go away, why bother doing it online?  Downloading is easy… there’s a note that says “Download this recording”.  The two ** next to it points to special Firefox instructions – which are merely “Right click and select “Save Link As.” 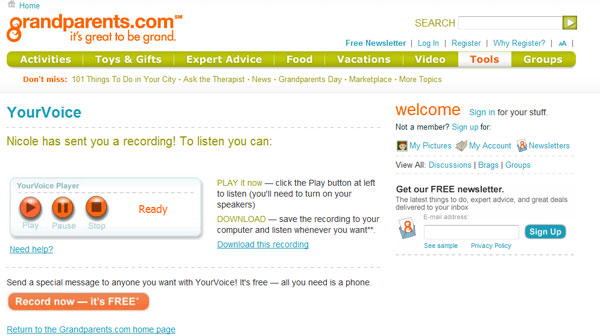 After doing my test run to see how it worked and get screen shots, I waited impatiently for the kids to get home to put it to the real test.  Each of the girls recorded a message for my mother-in-law.  When my MIL called to let me know she received them, she was bubbling.  She was very excited to hear the girls’ voices and already said she was downloading them to her desktop. I proceeded to tell her about YourVoice and we discussed the program.  I wanted to know what she thought of it and whether she thought it was a good service.  She said it was excellent. – she loved receiving the email with the kids’ voices.  We both agreed that a pitfall to the program is that it is imbedded within the Grandparents.com website and is aimed primarily at Grandparents.  There’s nothing wrong with the Grandparents.com site, but the service is so incredible they need to get it mainstream.

I said to my MIL “When I was working, it would have been nice to have a service like this to call in sick.”  Jokingly, she said “I can see someone proposing using it… or a Dear John.”  We bantered several silly ideas off each other for about five minutes.  When the kidding was done, the concept sunk in that it had some real-world applications that would be wonderful for archival purposes.  She said “I think it would be neat if the kids used it to send a message to themselves on their birthday. ‘Today I turned x years old. This is what I did to celebrate my birthday…’ then they can go back and listen to them all when they’re older.”  I agree with that because even though video cameras are more common than they used to be, not everyone owns one.  Not everyone uses theirs.  YourVoice can be used to create audio for a digital scrapbook.

What are the costs? It’s not a toll-free number so long distance charges apply. Luckily, we have unlimited free long distance so we can use this service as often as we want without any fees!

Does it require an account or activation? Nope. As you can see from my screen shots – I went through the entire process, sent, received and listened to – without ever logging in.

Is it secure?  I don’t know but I was curious if someone else could easily listen to my messages.  So I went to mine, changed the URL a few different times to see if I could access what other people had recorded.  It gave an error each time.  It’s on the internet and not password protected so I’m sure there’s a way – but at least the messages aren’t sequentially numbered.  I, personally, wouldn’t use this service to convey personal information such as phone numbers or addresses.

What’s the catch? You need simultaneous internet access and phone service to be able to record your message and your recipient needs a valid email address. That’s it.

Benefits?  Free. Easy. Inventive. Green. Fun. The applications are endless.  A voice recording to wish someone happy birthday instead of sending a card that will just get thrown in the recycle bin.  Or a child’s voice to send to a parent who is currently on tour of duty or away on business.  It’s even a great way to make an announcement like “He proposed!” or “We’re expecting!” when you’re unable to get a hold of someone on the phone.  Better yet, just an archive of someone’s voice so yo can listen to it whenever you want.

I gave some thought to using this for Miss K to send digital thank you notes to her classmates for their gifts.   At her age, it would require too much coaching telling her who to thank, what she received from them, etc.  For someone older or even someone who usually doesn’t write thank you notes, this is a great alternative. If I received this type of thank you from a mom-to-be thanking me personally and specifically for a shower gift, I would think it’s fine.  It’s personal, it’s a less time-consuming and less costly method than traditional thank you notes, it’s quick… and it’s environmentally friendly.  Making clear that this is NOT an E-card but a personal voice message, I would love to hear what other people think of receiving digital thank you notes such as this.

To celebrate Grandparents Day on September 13th, try the “YourVoice” service.  You’ll see how easy it is and I’m certain that the grandparents in your life will be just as excited as my mother-in-law was.

My Return to CorelDRAW Graphics Suite

1 thought on “Leave a Message After the Beep”