When Miss M was about to turn a year old, DH and I went on the South Beach Diet. I felt out of sorts all day long.  Changing my eating habits so dramatically shouldn’t make me feel as funky as it did so I took a pregnancy test and, holy cow, found out I was pregnant. Quite a remarkable difference than the multiple years of fertility treatments we went through to get pregnant with Miss M. But that’s a story for another time…

Anyway, the South Beach Diet was fairly new at the time and was still living under negative shadows left by the Atkins Diet craze. But I was intrigued by the diet and really wanted to lose some of the weight I had gained from the infertility treatments, the pregnancy and the stress of a new baby. I genuinely felt that it was worth sticking to but since my pregnancies were high risk, I would only proceed if I had my doctor’s blessing.During my first OB exam, I brought in literature about the South Beach Diet along with sample meals, snacks and ‘rules’. For those who aren’t familiar with the SB Diet, it isn’t about eliminating carbohydrates from your regimen as much as it is about replacing bad carbs with good ones.

When my doctor looked at the list of all the vegetables that were recommended and the healthy snacks, he smiled and said “That’s how we prefer that you eat during your pregnancy.” I was overweight and he agreed that losing unhealthy weight while gaining baby weight was a positive health benefit.

I added a variety of different vegetables to our menu and started looking for alternative snacking options.  Snacking is a huge issue for me because I not only do it when I’m hungry, but I also do it when I’m stressed or bored.One product kept coming up as a welcome substitute for so many things… Pork rinds. Instead of snacking on potato chips – snack on pork rinds. Can’t live without croutons in your salad? Chop up some pork rinds. Need filler in your meatloaf? Fill it with some pork rinds. Craving breaded cutlets? Finely grind up…you guessed it…pork rinds. Pork rinds are an extremely versatile product and they taste good. 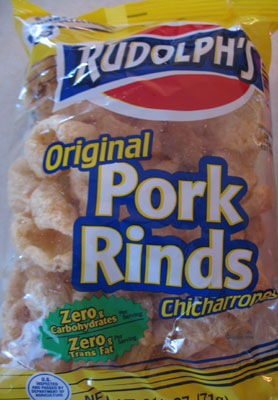 That was several years ago and I actually had forgotten about them since it has been so long since we stopped doing the SB Diet.  Funny how memories come rushing back though.  One of my public relations contacts asked if I wanted to review Rudolph Foods Pork Rinds.  Instant memories to those South Beach Diet days. While some people may turn their nose up at Pork Rinds, it’s only because they’ve never tried them. I welcomed the opportunity to test them out.

We received the original flavor as well as the hot and spicy.  When we used to purchase pork rinds all those years ago, I only recall the original flavor.  It’s fun to see the varieties that have evolved since then.  The original flavor make a good snack and are great for cooking substitutes for bread and crackers, but the hot and spicy are my new favorite for snacking.  They are so flavorful that you can only eat a handful before your mouth says “ouch”.  And you can’t eat them fast which makes you fill up a lot quicker.  There’s also a Bar-B-Que flavor now too but I haven’t tried it yet.  Although I haven’t tried the hot and spicy in cooking yet, I imagine that they would make a good breading for meats. 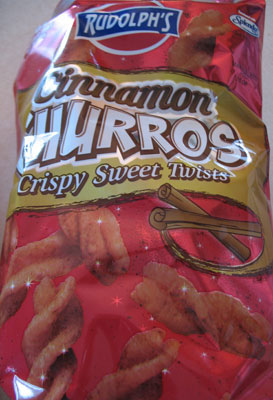 When my PR rep offered for me to test out the pork rinds, I didn’t think the kids would like them so they sent along some of the Cinnamon Churros for the girls.  Yeah, for the kids.  I’ll stick with that story.  (Churros…Yum.)  Rudolph’s Cinnamon Churros are light and tasty, just like the churros we used to get from street vendors when we lived in southern California. We all loved Rudolph’s Churros but I was not ready for the girls’ reaction to the pork rinds.  While I don’t expect my kids to like everything, I do make them try stuff.  It was a pleasant surprise when they both enjoyed this ‘new’ pork rinds snack food.  They’re just like chips so why wouldn’t they like them.  Of course.Rudolph’s pork rinds are available at stores nationwide, in addition to on their website If you’re looking to make some changes to your eating, pork rinds are a great alternative. Plus, you can easily find tons of recipes for things from pancakes to dessert. Google pork rind recipes or check out the recipes at Rudolph’s.

If you haven’t tried pork rinds before, grab a bag or two of Rudolph’s the next time you’re at the store… be sure to grab a few varieties! If you’re like me and haven’t had them for a while, reintroduce yourself to them. You’ll be glad you did!

On a side note:  To celebrate the DVD and Blu-Ray Hi-Def release of Mamma Mia! The Movie, Rudolph Foods ran a sweepstakes for a chance to win a trip for two to Greece, the DVDs and free Cinnamon Churros for a year.  The sweepstakes ended January 5, 2009 and they recently announced the winner!