Home / Recreation / Movies / What We Watched: Thor: Love and Thunder 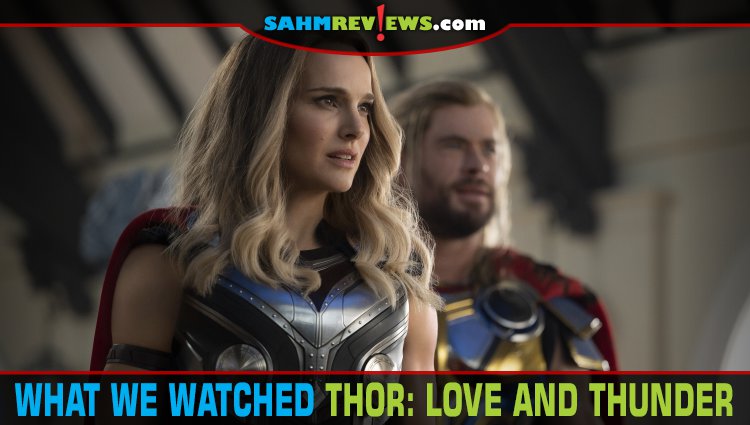 What We Watched: Thor: Love and Thunder

If you haven’t watched Thor: Love and Thunder yet, then you probably cringe any time someone on social media makes a comment. There’s nothing more frustrating than spoilers (don’t worry, there are none in this post). This one has been particularly difficult to avoid because the conversations haven’t been as simple as “It’s awesome. No spoilers. Go see it.” or “It’s awful. Don’t worry about spoilers, just don’t waste your money seeing it.” Every Facebook post that I’ve seen since the release has been controversial. Some have loved Thor: Love and Thunder, but equally as many have hated it. The trailer is quite indicative of the movie. Check it out:

Chris Hemsworth’s Thor (as opposed to Natalie Portman’s Mighty Thor) carries himself just like he does in all the versions before it. He’s heroic, yet funny. Unlike the Deadpool movies that offer raunchy humor, Thor is comical in a clean, family-friendly way. I thought it was fine, but some people complained that it’s too campy.

When Natalie Portman was announced as having a role as Thor, I heard a lot of discussion about whether she would be taking over the franchise and we would no longer see Chris Hemsworth. Incorporation of the two in the same film put those worries to bed. At the same time, this production explains more of their stories.

Of course, everything Marvel needs a villain (even if sometimes the villain was a hero). Christian Bale takes on that role as Gorr in Thor: Love and Thunder. It’s often heartbreaking seeing how someone becomes the bad guy and that’s no different here. It doesn’t take any time at all to understand why because we see the catalyst in the early scenes.

As with other movies in the Marvel Cinematic Universe, there are a lot of Easter Eggs and stories that circle back in Thor: Love and Thunder. As an example, the Guardians of the Galaxy play a role in this move as does Valkyrie. I heard rumblings of controversy regarding some of the characters in this movie. If they were referring to Valkyrie, then those things were blown out of proportion. Her character is strong and funny while also being loveable. If it was something else then it went completely over my head.

Thor: Love and Thunder was filled with action, humor and great acting. Another stepping stone in the many story lines of the Marvel Cinematic Universe, it’s definitely one to see in the theater this July! Get your tickets today!

Who is your favorite character from Thor: Love and Thunder?

One comment on “What We Watched: Thor: Love and Thunder”