Growing up in Iowa, I loved going out in the snow. Whether it involved building a snow fort, sledding or skiing, I enjoyed it. Yes, there were days that it got cold but we just didn’t stay outside as long. (And mom always had hot chocolate on hand to warm us up!) Other than cheering for school cancelations, weather conditions didn’t play into my vocabulary. As a teenager, I had more of an interest in it because I had to drive. Fortunately my parents considered safety and purchased a 1979 Ford Bronco for my brothers and me. It was heavy-duty and capable of handling off-road terrain. At least that’s what I was told by my older brothers who I’m sure tested that theory more than once. Whether my parents sprung for special tires is beyond me. It just wasn’t something I ever thought about.

I don’t know if age has done me in or if I’ve been tarnished by living in a warmer climate but seriously, these brutal winters have to go. Not only is the bitter cold a deterrent but the road conditions scare me more than they ever did before. An SUV or a mini van feels pretty safe but there isn’t much you can do if you hit a patch of ice.

Well, that’s what I used to think anyhow…

A few weeks ago I was invited by Bridgestone Tires and Tire Rack to attend a media experience where we learned first hand the importance of winter tires. I know, I know. You’re probably thinking “Tires are like soda pop. Cola and Diet Cola both satisfy your thirst and taste buds; they just have a slight difference for preference.” Yes, all tires look the same but they are vastly different in their function. They have different tread types and rubber compounds depending on their purpose. 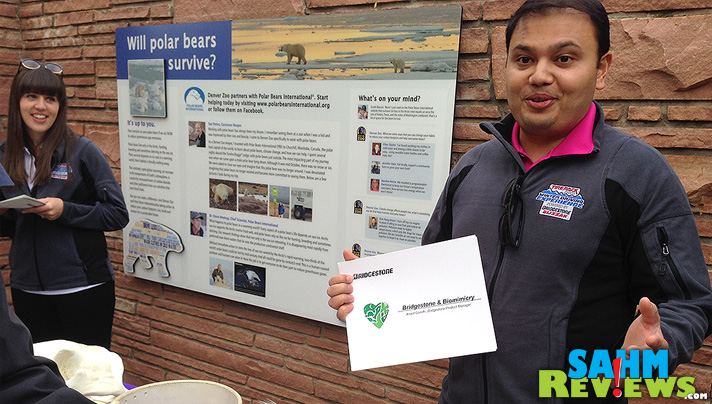 As part of the media event, we had the opportunity to visit the zoo and hear about how polar bears, geckos and mussels helped inspire the current design on the Bridgestone Blizzak WS80 winter tires. Think about it – Mother Nature is a brilliant engineer. 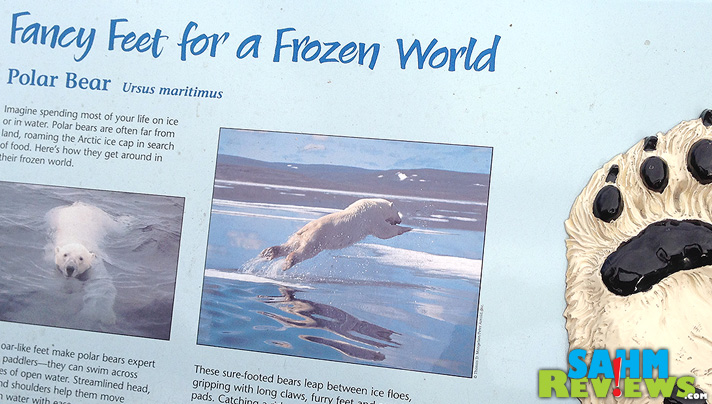 Geckos can hang upside down on surfaces, mussels cling to about anything even in strong currents and polar bears don’t slip and slide all over the arctic ice. The biology behind this was applied to the tires. Biomimicry is the the “design and production of materials, structures, and systems that are modeled on biological entities and processes.” 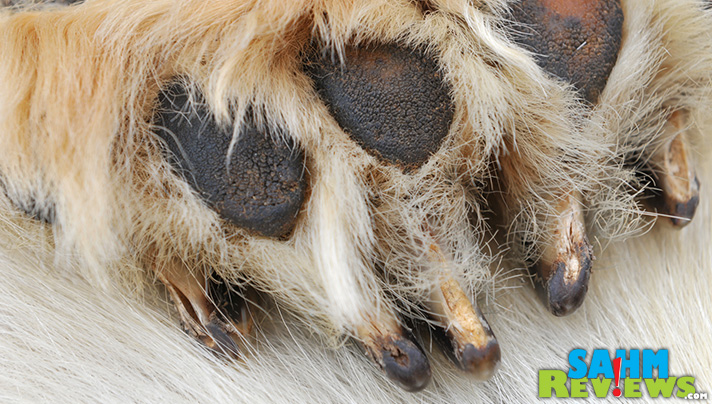 Bridgestone engineers studied how a polar bear’s paws remain soft in cold temperatures enabling them to grip the ice. The rubber compound that goes into Blizzak tires contains technology based on these principles. 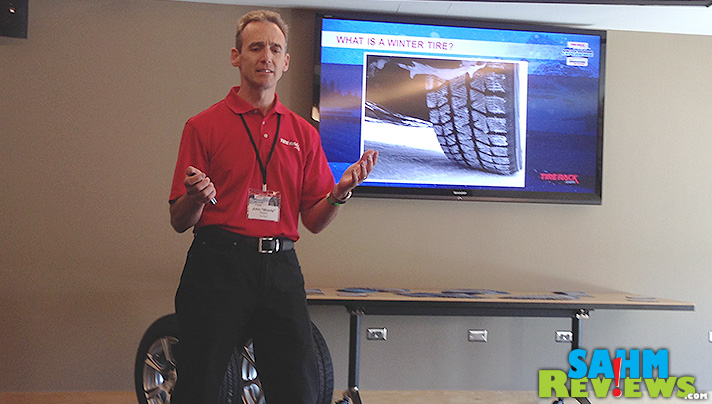 That afternoon, we were shuttled to the Pepsi Center where Matt Edmonds, VP and John “Woody” Rogers from Tire Rack along with Anant Gandhi, Product Manager from Bridgestone Americas explained winter tire concepts in more detail. Tires are affected by more than just snow. The ice, the temperature outside as well as the temperature of the pavement also play a huge part. When the temperature drops below 40°, regular rubber tires take on a plastic-like consistency. I bet you didn’t realize that the surface area of each tire that actually connects with the ground is only about the size of the palm of your hand. That isn’t very big when you really think about it so imagine the importance of that small area. 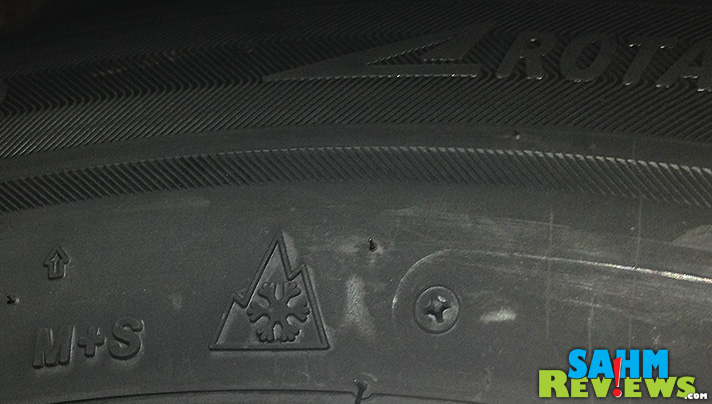 Tires have different classifications written right on the tire. M+S refers to Mud and Snow and are considered “all season” tires. The mountain/snowflake emblem indicates they meet the requirement for snow testing. Based on a Harris Poll study conducted on behalf of Bridgestone America, Inc, it was found that while 84% of drivers in the U.S. Snowbelt prepare their cars for winter, only 25% put winter tires on! I’ll be the first to admit that I’m part of that not-really-prepared percentage. Mother Nature is the best gauge for when to change out your tires. If you can consistently see your breath then it is time to put the winter tires on your vehicle.

After a tour of the Pepsi Center, we headed to the center of the arena where the ice was prepped for a more hands-on interpretation of the differences between all season tires and winter tires. We participated in three experiences on the ice rink: (1) drag racing. (2) cornering maneuvers and (3) tricycle racing.

Hardly a fair race. Both vehicles were exactly the same (except for color) with all the same settings enabled, one was equipped with all season tires while the other had Blizzak WS80 tires. The purpose wasn’t really to race each other but to allow us to see and feel the differences between the two tire types. The goal was to be consistent when we drove each vehicle. If we eased on the gas on one, do it on the other. If we put the pedal to the floor on one, do it on the other. Stopping instructions were the same – wait until center ice when the instructor says to brake then ride them until the car comes to a complete stop. No pumping the brakes. 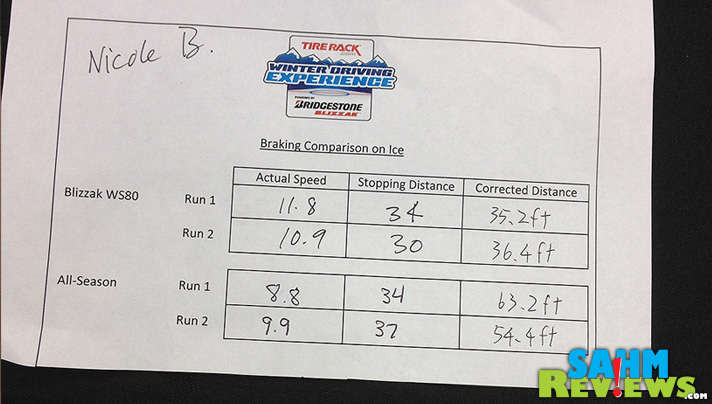 As you can see from the videos and the comparison sheet, the difference was pretty astonishing. The car with all season tire not only had trouble getting up to speed but it also had more difficulty stopping. Behind the wheel, I was able to feel a dramatic difference in my confidence. In the car with all-season tires, I was certain I was going to skid into the end wall.

The same two vehicles were utilized so as before, they were exactly the same except for the tires. This time, however, the professionals needed to do the driving not just for safety but also for accuracy. Each of the drivers maintained the exact same speed to ensure the performance results were apples to apples. As you can see from the videos, the vehicle with all season tires slid through the turn and into the cones while the vehicle with Blizzak WS80 tires maneuvered the corner just fine. Remember, they were going the exact same speed. The only difference was the tire type. That exercise by itself should be enough to make people run out and buy winter tires! 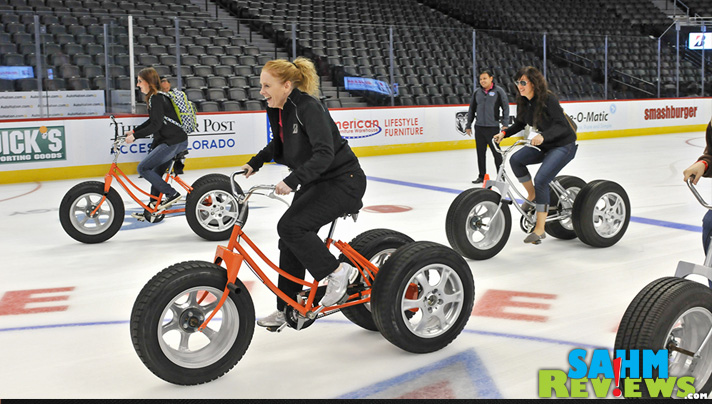 Yes, you read that right. We had the chance to zip around the ice on tricycles equipped with all season and Blizzak tires. At first, it was fun – spinning in place. But then we rode around on the ice and were told to keep pedaling through the turns and use the brake instead of coasting to simulate what we do in vehicles. Yeah… No. That was not quite as fun. I felt out of control and was certain I was going to run into someone or something. Then they had us line up to race each other. Just like in the cars, the Blizzak tires were able to grip the ice better and outrun the tricycles with all weather tires.

Overall, the experience was quite eye opening. The biggest issue for many people is that they don’t want to outlay the cost of buying another set of tires. Matt Edmonds from Tire Rack provided the eye-opening fact that a set of tires is probably cheaper than a deductible. In addition, because the all season tires aren’t being used during the winter, they will actually last longer staving off the purchase of new ones a bit longer. As a bonus, as the tread of a set of winter tires begins to diminish, they become the equivalence of a set of all season and can be used as such.

Aside from the cost, many people don’t have anywhere to store a set of tires. If this is a concern for you, see if someone in your area offers a tire hotel. This is a service where they store the second set of tires until they the weather indicates it is okay to swap them out. It’s easy to find the negatives about purchasing a set of winter tires but the positives far outweigh those.

What do you do to prepare your vehicle for winter? If you live in a warm state… can we come visit during the winter?

27 thoughts on “Getting a Grip on Winter Driving”