Over the years there have been dozens upon dozens of games that are some type of variation of Hearts, Rummy or Spades. Typically referred to as trick-taking games, these titles feature the need to complete some type of set or run of cards in order to score. Rarely have there been any new advances in the genre, only theme and artwork differences to set them apart from one another. 10 Down by CSE Games looks to have broken that mold with a unique scoring mode that might make it your next card game purchase. 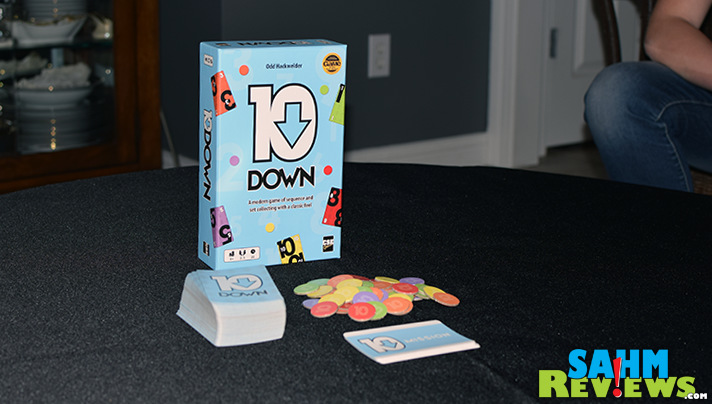 In the box you’ll find a deck of 100 Number cards in four different colors, 10 Mission cards for use in a more advanced variant and 50 cardboard tokens, also in four different colors. The object of 10 Down is pretty simple – be the first to collect 10 tokens! Fortunately this 20-minute game includes a number of ways to earn them.

Each player begins the game with 10 cards in their hand. In order to score you must complete a full series of cards numbered one through ten through the typical “draw one, discard one” mechanism. There are multiple discard piles depending on the number of players, and you may draw and discard to any of them. Once your series is complete, you may lay them down, proclaiming “10 Down” (as in “I set down 10 cards”)! You’ll receive one token for completing your series. 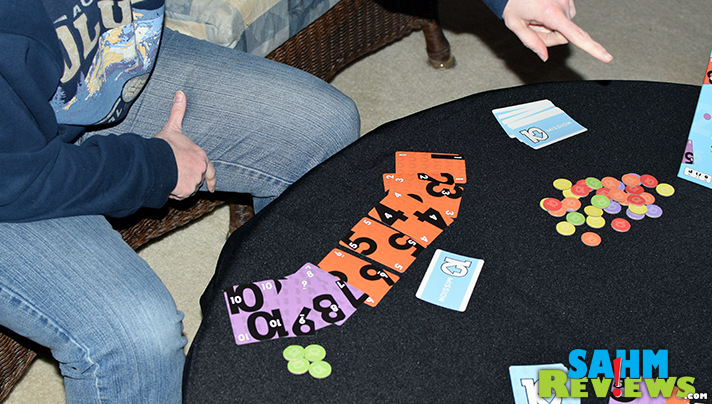 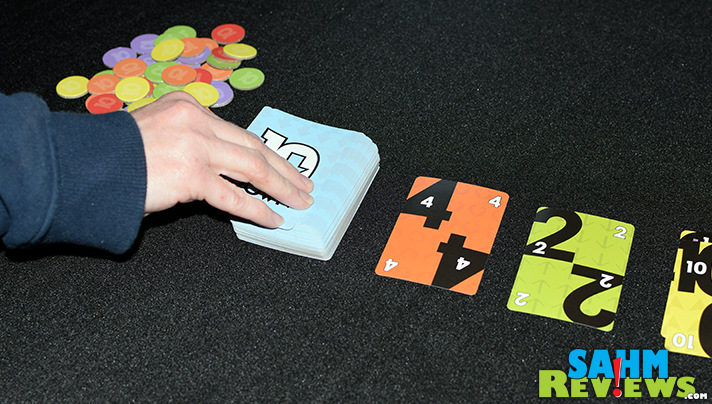 You can have multiple color runs in one hand (three yellow and three green for example), each scoring on their own. Once you receive your tokens, all cards you played as well as any in the draw and discard piles are reshuffled and you are dealt ten more for a new hand. The cards held by your opponents are left alone as to not disturb the sets and runs they were working on.

10 Down supports 3-5 players, and there are also rules for Team Mode which will handle up to six players total (two teams of three). But the real fun comes when you play Color Mission Mode using the extra provided Color Mission cards.

At the beginning of the game each player is dealt one of these card. You may look at your own, but the mission is kept secret. On these cards is a specific combination of colored tokens that you must collect to win. In the base game you simply received any color token while scoring. In this version things are a little more complicated.

First, while you still have to complete ten in a series to lay down your 10 Down, you do not receive a token for this feat. You only receive tokens for color runs in that series, and the color of tokens you receive will match the color runs you collected. You can only collect color tokens up to the amount shown on your mission card, so any you would earn that gives you more than you need are simply ignored.

With the addition of the Mission Cards, blocking opponents from specific colors while still looking our for the ones you need makes 10 Down much more than a simple trick-taking game. The base game is a simple race to build your series as fast as possible. In this variant your opponents card choices impact you more directly (and vice-versa). I would suggest moving on to this more advanced ruleset as early as after the first game – it is that much better!

CSE Games has nicely kept the price under $15 shipped on Amazon and is also available directly from them on their website. You also have a chance to win a copy for yourself right now by entering the sweepstakes below! Be sure to come back every day for additional entry opportunities!