Yesterday morning, our family got up, ate breakfast, grabbed some healthy snacks, strapped on some running shoes and headed to a local park to participate in a race.

Okay, technically, only the kids were wearing actual running shoes but that’s not the point. If it wasn’t freezing cold out, I would have put running shoes on also. Fine. You’ve got me. That’s a fib, too. I had no intention of running in the race yesterday morning.  As I’ve said in recent posts, I’m working on improving my running but entering a race when it’s ridiculously cold out isn’t how I want to start. 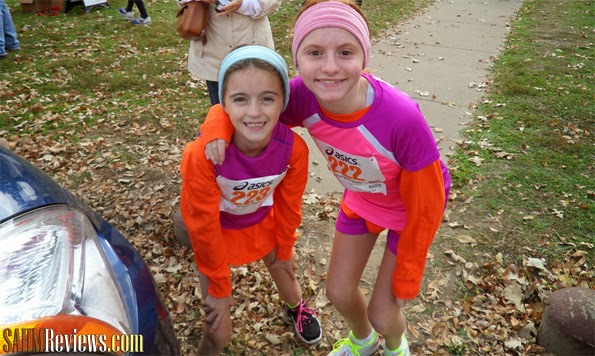 The girls did okay coming in at just over 8 minutes. It’s a good time, but certainly not their best times. Unfortunately, they hadn’t practiced at all this past week because we had company in from out of town. For that same reason, they hadn’t eaten as well as we usually do. We’re all well aware, even the kids, that what we eat plays a big part in how our bodies perform.

So last night, when they wanted a snack, I decided to change it up a bit from what they usually have. We always have fresh fruit around the house but we purchased a heap-load of bananas for our guests. A few too many. The girls prefer bananas mixed with honey, peanut butter and mayonnaise but since it isn’t the healthiest option, I only like making that for them on special occasions instead of regularly. 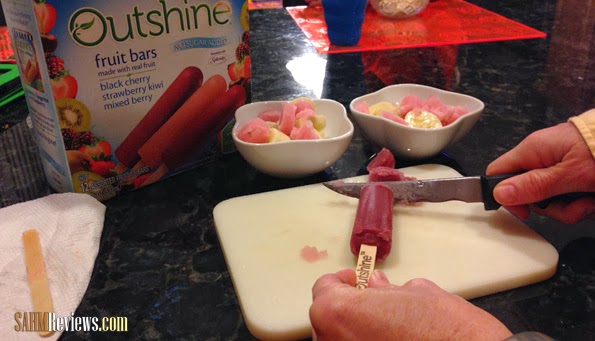 I decided to chop up some Outshine Fruit Bars to mix with the bananas and create a unique healthy snack. There are several flavors, so I let them choose which sounded best to them. We grabbed two from the “no sugar added” variety pack. Not only did it give the bananas a fresher taste, it seemed like a treat to the girls because it’s something they usually would just by itself. 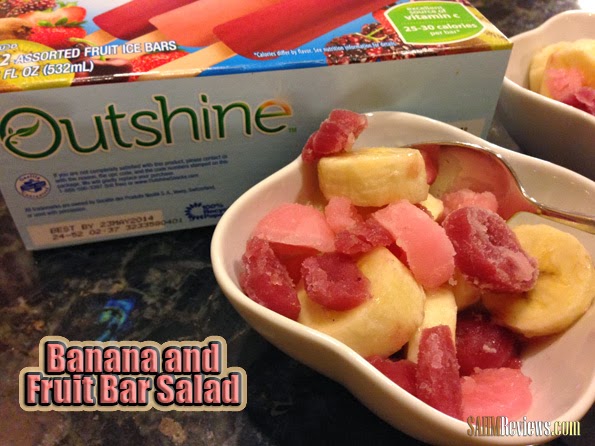 It went over really well albeit very cold. Eating a fruit bar in a customary fashion (straight off the stick) isn’t exactly fun when it’s so cold outside. Chopping it up and mixing it with other stuff gave the kids a sweet chilled dessert! 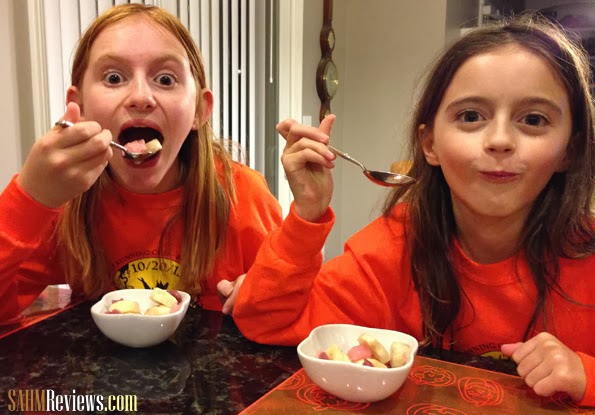 While I was chopping it up for the kids, I had a great thought. Chopped up fruit bars would be great in a drink! By cutting down the middle, I was able to free the stick very easily and cube the entire bar into fruit “ice” cubes.

Once the kids were in bed, I decided to put it to the test because recipes have to be tested before posting. Yeah… “Testing.” That’s the excuse I’m using to make myself a mixed drink. Judging not allowed! At least it wasn’t 3 in the afternoon when I decided to test it out. hehe 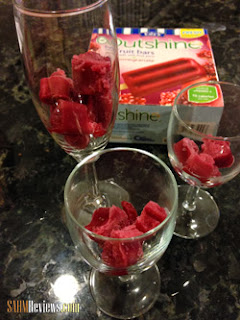 I happened to have four different boxes in the freezer and looked through each to figure out which would be best with the beverages I had on hand. The pomegranate fruit bars sounded best so I decided to give those a shot. The first thing I discovered is that the fruit cubes looked very elegant in the glasses! If you’re one that likes to entertain, having a selection of Outshine Fruit Bars in your bar freezer will liven up your drinks. Think of all the possible combinations!

Since I’m not a big fan of rum, I figured a little added flavor would improve it for me. While it was beautiful, it was still too strong for me. Someone who likes rum and mixers would probably like this chilled option.

Then I poured Moscato. It’s one of my favorite drinks. It was tasty, of course, because…well… I like Moscato! Since I was testing out other stuff, those fruit cubes gradually started to melt and I realized that Pomegranate Moscato Chiller is AMAZING. I left the glass alone until the cubes had completely melted then had to resist the urge to pour another glass. 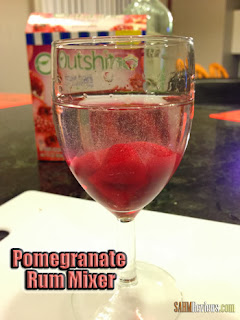 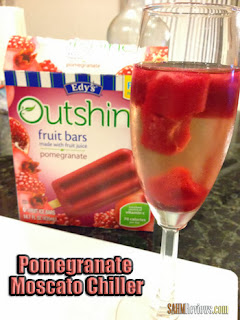 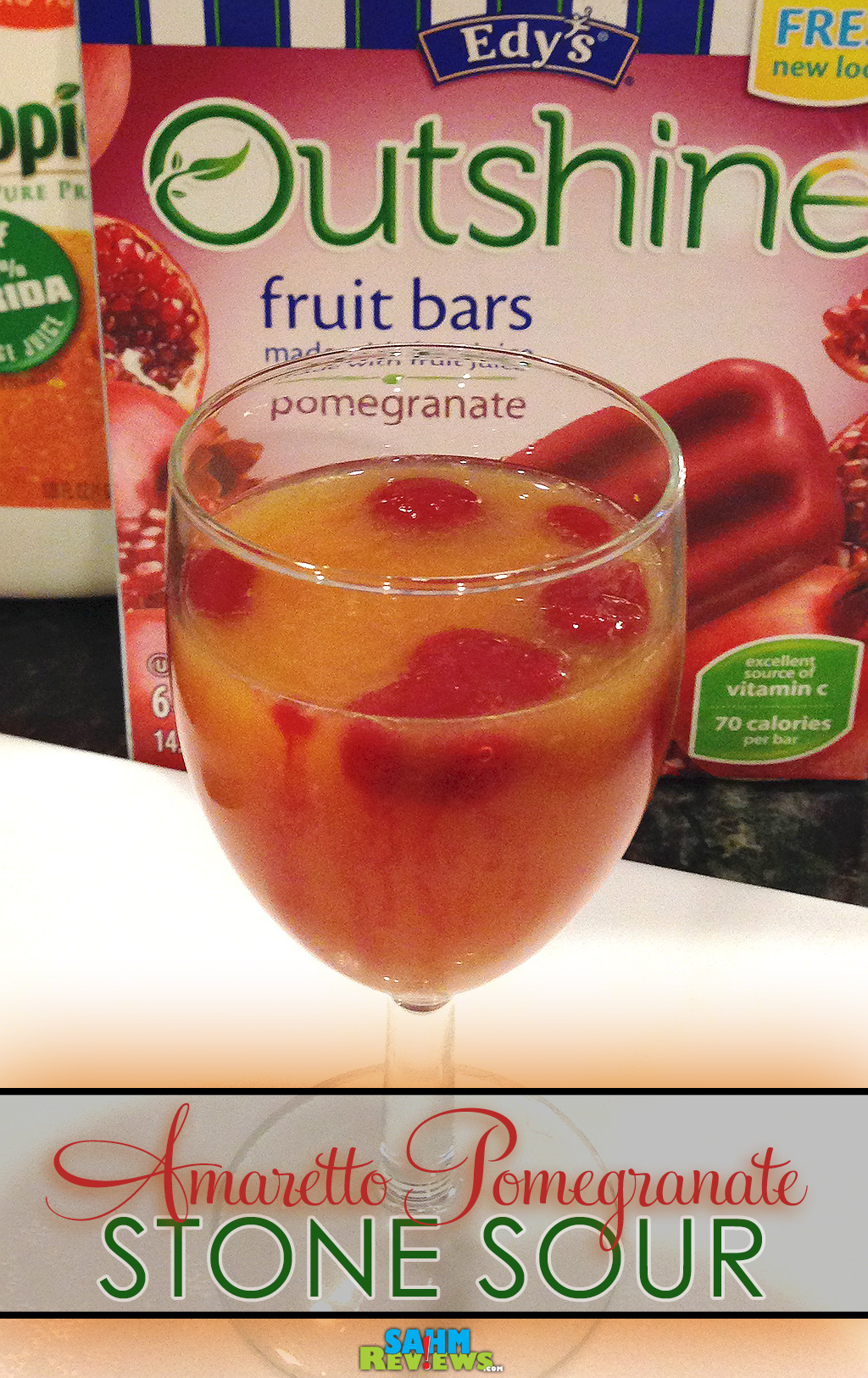 Finally, I made my favorite mixed drink. Amaretto Stone Sour. It’s merely Amaretto, Orange Juice and Sweet & Sour Mix. Most people are used to Amaretto Sours but here in the Midwest, a “stone” version is more common. The only difference is the Sweet & Sour Mix.

My rendition, which had Pomegranate Fruit “ice” Cubes, is even better! If they served that at a bar, I would order it in a heartbeat. But since I have all the ingredients here at home, I don’t need to. I can just make it here.

Ultimately, what I discovered is that an inexpensive box of real fruit bars can make even common stuff extraordinary. The girls enjoyed their dessert (as did I) and both DH and I thought the drinks were awesome.

For more information on the variety of flavors of Outshine Fruit Bars, visit their webpage. You can find them at stores under the brand of Edy’s or Dreyer’s depending on your geographic location. Follow Nestle’s Twitter account and or Outshine on Facebook.

51 thoughts on “More Than JUST a #RealFruitBar”