During my pre-teen years our family was stationed overseas in what used to be West Germany. We didn’t live on base as my parents weren’t military, but government civilians stationed over there.  This was in a time well before cable TV, the internet, free phone calls – this was the 70’s man!  With neighbors that spoke a different language we really didn’t have many friends to play with.  There were a few other Americans in our town, but the closest were nearly 2km away.  Bicycles were our main means of transportation to visit our friends, but one Christmas that changed…

There she was in all her plastic glory – a brand new black plastic Makaha USA skateboard.  One solid piece of PVC with matching black rubber-ish wheels and shiny chrome trucks.  Little did mom and dad know how this toy would impact my childhood (not to mention our healthcare budget).  Almost immediately the bicycle began gathering dust while I began “laying rubber” to the streets of Hofheim, Germany!  Fortunately my friend, Ben, received a skateboard at about the same time as well – so thus began hours upon hours of self-training that eventually culminated in a paid-admission skateboard show for the family and neighbors!  (Long story short – it was a way for us to weasel a few bucks out of the adults to help pay for new wheels once we wore them out)!

Fast-forward 30ish years, and I now have two young girls that have mastered riding their bicycles and scooters.  What’s the next natural (in my world) step?  Skateboards of course!  We had tried a video game version on the Wii a while back, but nothing can replace the fun of rolling down the street dodging rocks and cars all in the name of a quick thrill ride!  Thanks to the fine folks at Collective Bias, I learned of a new line of skateboards by Shaun White Supply Company and they would be available at my local Walmart!  Whew, I was fearing this 40-something guy would have to try and track down a local skateboard shop and make a fool of myself trying to be ‘cool enough’ to buy a board from someone barely old enough to drive to work.

Well, things never go as smoothly as you’d like them to.  The skateboard section had a few offerings, but none of the quality that I would have liked.  Although I began on a solid plastic version, I know the technology is much better now – and it is only the best for my girls!  The Toy Manager and the Store Manager knew nothing about the Shaun White line, nor any special “pallet displays” I expected to see there.  Only by chance a bit later did I actually find them in a completely different section!

Only three available, all the same design.  Priced very well at just under $40.00 and I could immediately see the difference in quality over what I was used to!  This would be (almost) perfect!  They loved the graphics on it, but said they would’ve like to have seen some other choices that may have been a little more girly.  Sigh…

First things first – safety gear!  Helmets, knee pads, elbow pads and wrist guards in place and off to the local park to a flat parking lot to practice on!

You’d think these two had been doing this for a while, they both took to it right away with very little instruction from their ‘expert’ dad!  A while back we got them an el-cheapo Disney skateboard that is basically a flat board on wheels (think Back-to-the-Future scooter-turned-skateboard quality).  This Shaun White board is flared upwards on all four sides, making leaning to turn extremely easy, even for someone as small as my girls.  These are adult-sized boards, but as you can see from the photos, even my 36lb eight-year-old has no problem operating it.  And the smaller wheels (as compared to my childhood version) makes for very smooth and fluid riding.

Ok, daddy’s turn girls!  Let’s see if I still have the moves!  Amazing, a handstand on the first try!!!

Ok, so maybe that’s an exaggeration.  I have to say that the board is SOOO much easier to learn on than that plastic behemoth from yesteryear.  I felt extremely comfortable trying it out I didn’t want to give it back to the girls!  A few passes around the lot and I felt like I was twelve again!  My accomplishment for the day?  A wonderful (and successful) grind! 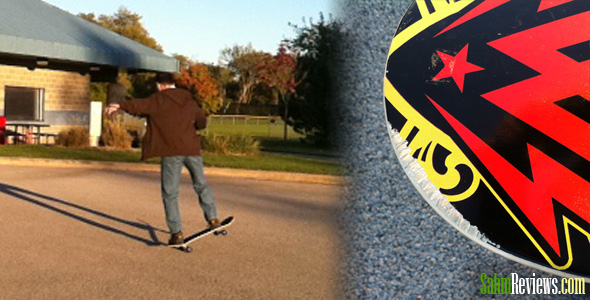 Yep, that one’s legit!  You can see the damage to the board (otherwise known as a badge of honor)!  A great end to another family event, one that I hope my girls also remember into their adulthood.

Turns out I’m not the only one enjoying this new line of boards!  Be sure to check out the official Shaun White YouTube channel and/or join the fun on their Facebook fan page or Twitter feed.  Watch your papers for a huge ad on October 28th promoting this new “Thrash” line of Shaun White boards!

12 thoughts on “This Old Dog Never Forgot His Tricks!”