My brother’s kit car has been parked in our garage for a few months so that DH and my brother could do some upgrades to it.  When they both have time, my brother stops by and they chip away at a long list of projects in hopes of finishing it up in time to store it (elsewhere) for winter.  The last time my brother stopped by, he arrived with a coffee house mocha in his hand.

Yeah, he got an earful.

So yesterday when he was on his way, he called about 10 minutes before he arrived.  “Hey Sis. I’m headed up the hill and am stopping by the Coffee Hound on the way by.  You want anything?”

“Yeah, that’s what I figured.  That’s why I called first.”

When he arrived, he had TWO cups.  One for me and one for him.  He said “I got something new if you want to try it.  If you like it better, you can have it instead.”

One was the mocha just like last time.  The other was a Pumpkin Spice.  I tried it then politely said I would have the mocha.  Had my heart set on it anyhow. 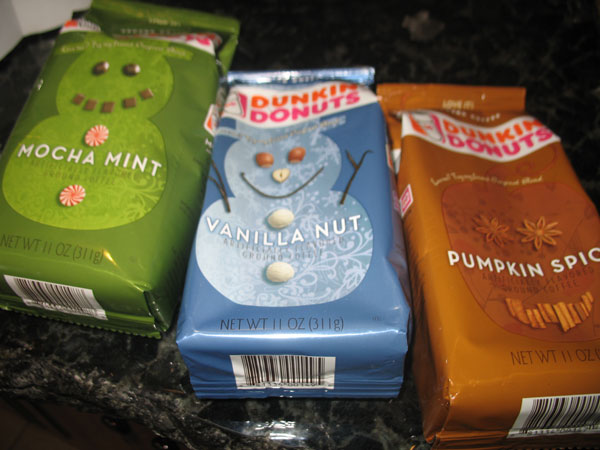 What I didn’t want to tell him is that I had a package of (only available for the holidays) Dunkin’ Donuts Pumpkin Spice coffee sitting on my counter.  I received it from Mom Central, on behalf of Smuckers, as part of a holiday-inspired blog tour.

The tour included three holiday flavors – Mocha Mint, Vanilla Nut and Pumpkin Spice.  When I went looking for them at my local grocery store (HyVee), they weren’t anywhere to be found.  I haven’t looked for them at Walmart or Target yet, but I know they are available at Amazon

Chocolate is a natural favorite of mine and the chocolate/mint combination flavor falls pretty close to my obsession with chocolate/peanut butter.  So naturally, I started with the Mocha Mint.  And honestly, I would have been perfectly happy drinking nothing but that.  I’m pretty disappointed to hear that it is only available for the holidays!  Curse you, Dunkin’ Donuts! 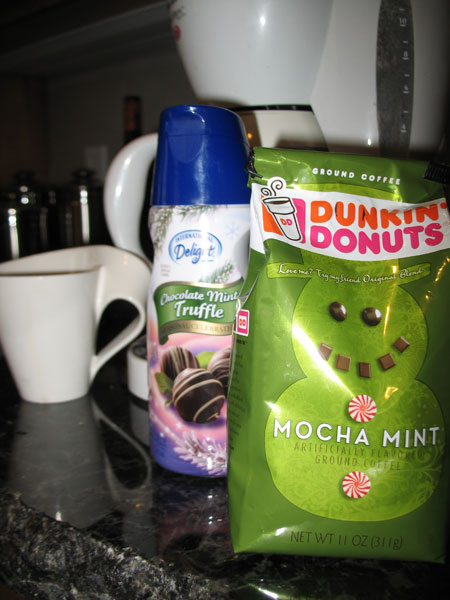 My sweet tooth is pretty horrible and I’m actually one of those “Would you like a little coffee with your cream and sugar, Ma’am?” kind of people.  Regardless of whether it is traditional or flavored, from a coffee house, restaurant or any brand at home, I add Splenda or Truvia and creamer… if I happen to have any in the house.

When I tasted Dunkin’ Donuts Mocha Mint, I first tried it black. Yes, black.  As in sans anything.  Surprisingly, I didn’t think it was horrible.  But since my sweet tooth overpowers all, I went ahead and added sweetener.  Then I tried it again… more to my liking that way.  I happened to have plain creamer in the cabinet so I added that and it was okay but that dulled the full flavor of the Mocha and Mint.  So the new preference for Mocha Mint was with sweetener only.

You know that trip to HyVee that I mentioned?  I couldn’t resist grabbing a bottle of International Delight Seasonal Celebration “Chocolate Mint Truffle” to add to the fridge.  Hmmm.  Chocolate Mint Truffle Creamer and Mocha Mint Coffee?  Interesting thought.  And yes, I tried it.  Both are awesome flavors separate but battle too much together.  I’ll save the flavored creamer for a regular unflavored pot and have the Dunkin’ Donuts Mocha Mint as described… with only sweetener.

Since I’m the only one in the house who drinks coffee, when my package of Dunkin’ Donuts holiday coffee arrived, I told my friend that she would have to come over and try it out with me. Unfortunately, I’ve been fighting a cold for a while and we didn’t have our coffee date.  I had been making the Mocha Mint for myself daily until yesterday when my brother showed up with the cup of Pumpkin Spice from the coffee house. Then I realized the tour ends today and I hadn’t tried the other two varieties! 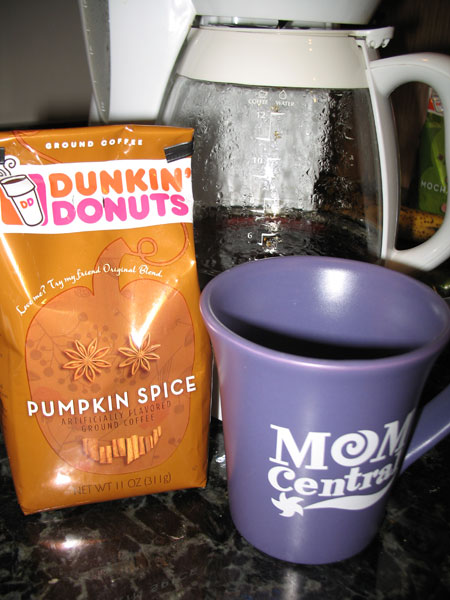 So today, I brewed up some of the Pumpkin Spice.  Yes, I tried it plain and no, it wasn’t to my liking that way.  I added sweetener and regular non-dairy creamer and it was excellent.  It actually tasted the same as the one my brother brought over yesterday.  Except I made it at home and it didn’t cost an arm and a leg at the coffee shop!  I’ll be taking that package along for Thanksgiving dinner!

What did I think of the Vanilla Nut?  Well, I got so wrapped up in the Mocha Mint that I didn’t even try it.  I wasn’t as excited though because Vanilla Nut is a variety I have found in other brands whereas the Mocha Mint and Pumpkin Spice were something I had NOT seen elsewhere.  I’ll drink it when the Mocha Mint is gone.  Sorry… just being honest.

As I said before, these are only available for the holidays so get them before they’re gone.  I know I’ll be looking for them so I can stock up before they disappear from the shelves.  And I’ll cross my fingers that Dunkin’ Donuts will get enough positive feedback that they’ll add these flavors to their regular lineup of ground coffees at the grocery store!  My only complaint is that these don’t come in Decaf because these cozy flavors would be great as an after-dinner dessert!

I’ll be attending Bunco this Thursday and plan to ask the hostess if she minds me bringing some over to brew up for the ladies!  If you’ll be participating in any holiday festivities, these would be a great hostess gift.

If you decide you like them or want them in Decaf also, be sure to drop them a note!  For more information on Dunkin’ Donuts packaged coffees, visit the Dunkin’ at Home website or find them on Facebook!