Some may call me a bad mom, but I think that there are advantages to letting kids spend time playing on the computer, playing video games and watching TV.  I don’t just hand over the reigns and let the TV be the baby sitter.  (Okay, sometimes I do but this isn’t about that.)  I don’t let the kids play just any computer game or video game and I certainly don’t let them watch just any TV show.

Last March, I posted about how my girls have started watching the classic cartoons that DH and I used to watch – particularly Scooby Doo and Tom and Jerry.  Yes, I feel old but at least I know that I turned out okay by watching the same thing.  But the focus of the post was more a rant about a show that I absolutely hate, Max and Ruby.  Fine, cute characters but ooh so much wrong with it.  I have been amazed during the time since I posted it how many hits my blog gets from phrases like “I hate Max and Ruby” “Max and Ruby horrible show”  and “Max and Ruby worst show ever”.

I don’t use my blog to spread negativity though.  So in the very same post, I said “My personal favorites are WordWorld and SuperWhy because they seem to really teach the girls something. If you have preschool children, I highly recommend you check out WordWorld on PBS because it’s a fun show to watch with the kids.”

I’m a firm believer in it too because Miss M (age 6) is reading level 3 books and she’s only half way through kindergarten.  Last summer, she was just starting to sound stuff out on her own then she blossomed and is soaking it all up.  She can’t get enough of reading.  During her IEP meeting and Parent/Teacher conferences, her teacher said that in the late Fall, they tested her for how many words she recognized.  Of the 100 words that are expected to be known at the end of FIRST grade, she already knew 64.  When tested right after Christmas, she was in the 80s. 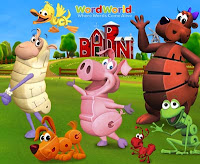 Almost a year later from when I posted that rant and rave, I was asked by the Family Review Network if I would be interested in blogging about the second season launch of – get this – WordWorld.  Hmmm. Let’s see.  Would I be interested in talking about a show that I claimed a year ago was one of my favorites?  Sometimes I have such tough decisions to make…

For those of you who already know about the show, this is just a heads-up that the new season starts tomorrow, February 13th with a Valentine’s special.  (Check your local listings for times.)  By the way, I would love to hear early-reader success stories from other first season veterans!

I can type all kinds of information but the video tells the story muuucchhh better.

I’m excited to say that we’re still making progress too. Miss K (age 4) has been interested in trying to read but isn’t quite there yet.  Imagine my surprise when she told me the other day after watching “WordWorld Rocket to the Moon” that “They didn’t have enough to share so they put an S on the end and then they could share them all!”  We had a nice little conversation about how adding an S to the end of the word means there are more.  Visualization made a huge impact there.

While some kids’ shows can be annoying to watch (like purple dinosaurs or a family of colorful aliens), WordWorld is the polar opposite. It’s cute, it’s fun, it’s inventive and parents don’t run screaming from the room when kids say “Can we watch WordWorld?”