You should never judge a book by its cover nor should you cast judgement about a board game before you know all the details. I’ve often said that Scott and I are at a disadvantage to the girls when we play games of speed and dexterity. Even so, that doesn’t deter us from playing because at the heart of it all, it’s entertainment and a quality family bonding activity. I’ve learned that I cannot shy away from games that I feel play on my weaknesses. In addition to the previously mentioned benefits, I’ve also discovered that game designers factor these potential pitfalls into their games. As an example, Letter Jam from Czech Games Edition is a word game. But its not like Scrabble where the person with the best internal dictionary has the advantage. I’m sure you’re asking, “A word game where you don’t have to know the entire dictionary?” Yes. Let me explain. 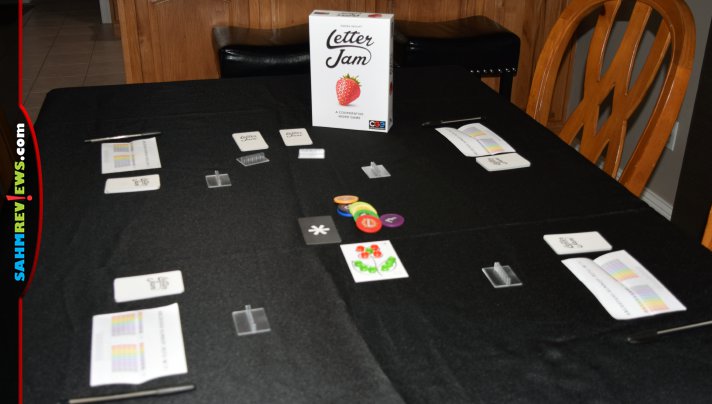 Up to six people can play Letter Jam, but if you don’t have the full compliment then you’ll use stand-ins to get you to six. Give everyone a card stand, a guessing sheet and a pencil. Select the setup flower card based on the number of players then fill it with the red and green clue tokens. Place it in the center of the table along with the numbered tokens and the wildcard (*). The flower card will also indicate how many nonplayers should be incorporated into the game as well as how many cards you’ll deal to them. Shuffle the deck and deal each nonplayer participant their designated amount then split the remainder up roughly among the players.

You’ll use the cards to create a secret five letter word for the player to your right so if you have a younger player, feel free to give them a couple extra. It doesn’t impact the game play; it just gives them more letters to help figure out a word for their neighbor. Once you’re done, discard any unused cards and pass the five to the person to your right. Everyone shuffles their newly acquired word and, without looking at the cards, places them in a row face down in front of them. Shuffle all the discarded cards and place them in a draw pile in the center of the table. 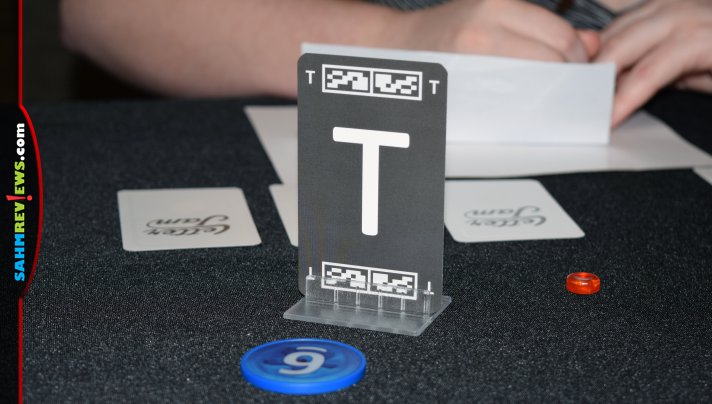 This is really where the game begins. Everyone takes the first card in their row and places it into the holder facing away from them. Much like in Hanabi card game, Purrrlock Holmes deduction game, Just One cooperative game and 3 Laws of Robotics hidden role game, everyone knows what’s on your card except you. Take the first card from each nonplayer stack and add it to their respective stands as well. 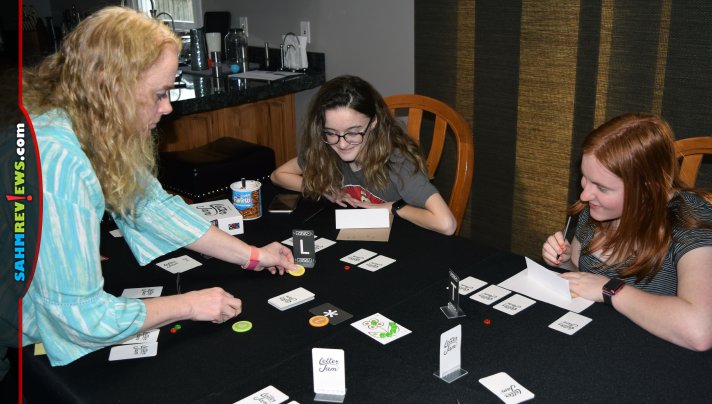 Survey all the letters you can see and try to come up with a variety of words utilizing as many of the letters as you can. You can even use the same letter multiple times if you wish. Once everyone is ready, discuss potential clues and determine who thinks they can help the most team members decipher their hidden letter. While doing this, you cannot discuss any specifics about the letters or who has them. The person who everyone feels is the best option takes a clue token from the flower then proceeds to use the number tokens to spell out their clue. 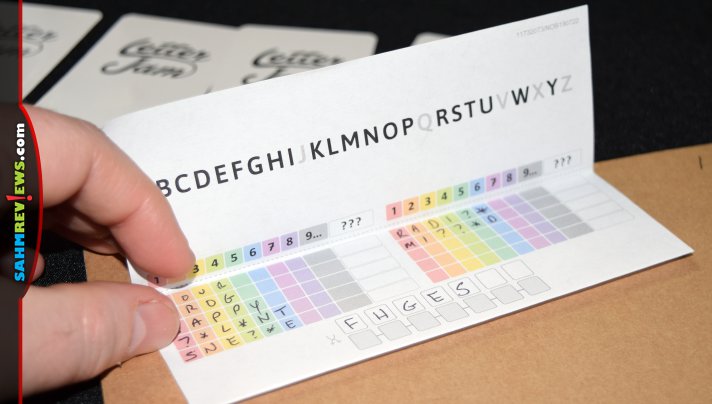 Using your guessing sheet, record the clue. Note the letters you know, the wildcard as an asterisk and your letter as a question mark. In the far right column, decipher what possibilities your letter could be. If you think you know what your letter is, tip it over so it’s face down. Record your guess at the bottom of the guessing sheet. If you aren’t sure then you’ll use the same letter for the next round. If the nonplayer letter is used in the clue, discard it and draw a new one from its stack. Proceed to the next round and repeat the process. Once you’ve figured out your five letters, you can use cards from the draw deck. Correctly identify the letter at the end of the round and it becomes available along with the wild card. 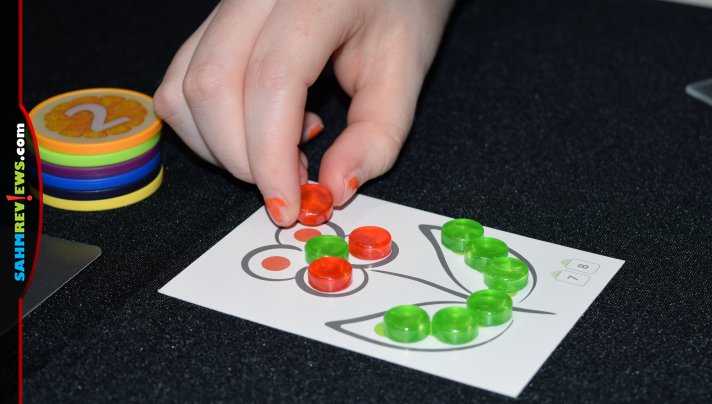 When you give your first clue, you take a red token then each additional time, a green one. Once all red tokens are gone then the extra green one in the center become available. If there isn’t a green one available then someone who hasn’t given a clue yet must do so. The purpose of this is to ensure that everyone takes turns as a cluegiver. The process of figuring out your own letters is so you can ultimately determine what your secret five letter word is! 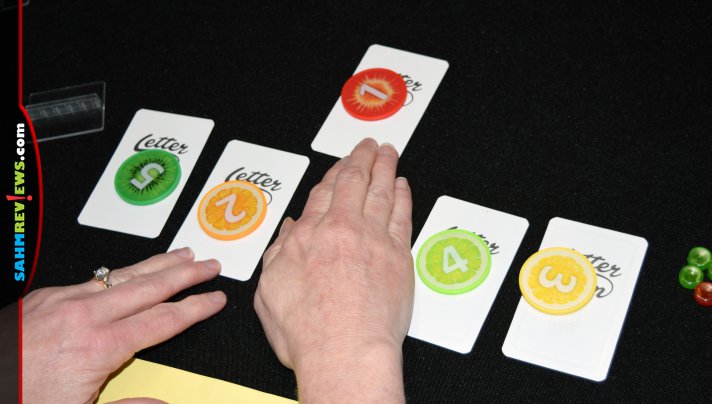 The game ends when either you end a round with no clue tokens available for the following round or if everyone decides they don’t need any more clues to decipher their word.  One at a time, players arrange their cards, still face down, to create what they believe is their word. If you aren’t positive of a letter, you can use the wildcard, but you don’t earn as many points. Likewise, you can use the wildcard and any bonus cards to create longer words that might help people be more confident of their letter. At the end of the game, if everyone figured out their word, you’ve basically won. There’s optional scoring to see how well you did, but you may find that it doesn’t matter. You’ll be too busy reshuffling the deck to start a new game. 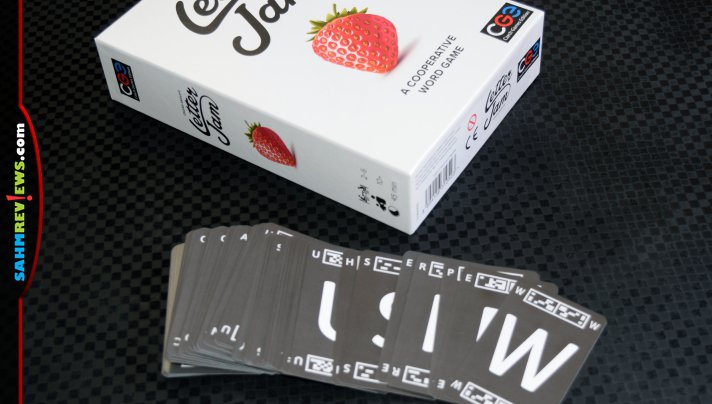 If you’re ready to work together to decipher the words, then pick up a copy of Letter Jam from a local game store or on Amazon. I would be remiss if I didn’t say that it was fun to find a couple Easter Eggs in the packaging. Take a little time when you first get the game to see if you can figure them out. It’s a glimpse of how much fun the game will be. While you wait for your copy, visit Czech Games Edition on Facebook and Twitter to get a glimpse of some other fruits of their labor!

Have you played a cooperative word game before?