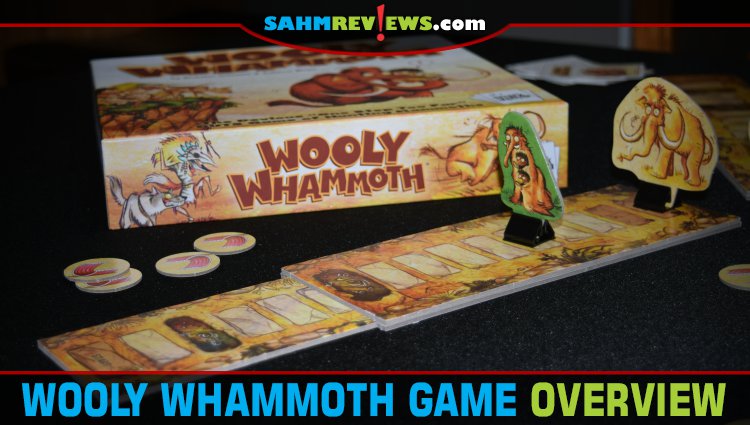 As we sit in our homes, day after day, it’s been interesting watching how people adapt to the new normal. I’ve heard so many people say they are going to start gardening, even if as simple as growing tomatoes at home. It’s been interesting to hear how many people are shifting their thinking including contemplating a garden and raising chickens. I’ve wondered how long before we start to hear that more hunting and fishing licenses are being issued so people can search for their own fish and game. Sure seems like we are getting a glimpse of what our pioneer ancestors had to deal with. Can you imagine what it was like for cavemen? Maybe playing Wooly Whammoth from Smirk & Dagger can kind of non-historically put it into perspective. 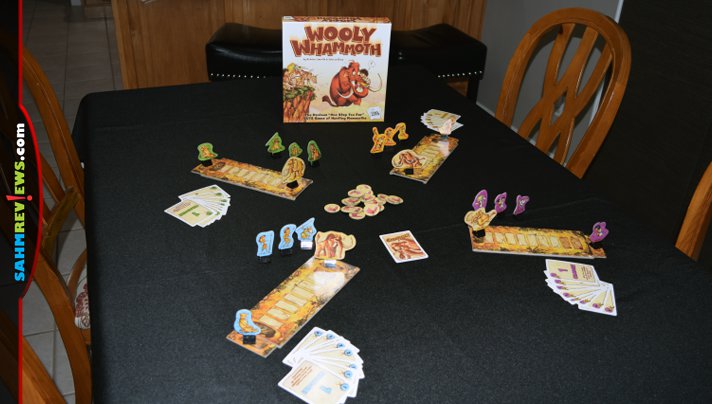 Wooly Whammoth plays up to four people who are trying to be the first tribe to collect six Mammoth Meat tokens. I bet you wouldn’t have guessed that you do that by chasing them off a cliff! Each player takes all the tribe members of their chosen color, the associated movement cards, a mammoth and a 2-part board. The deck of Charge cards is shuffled and placed within reach of all players. Place the two boards together with only the start space showing on the lower piece. 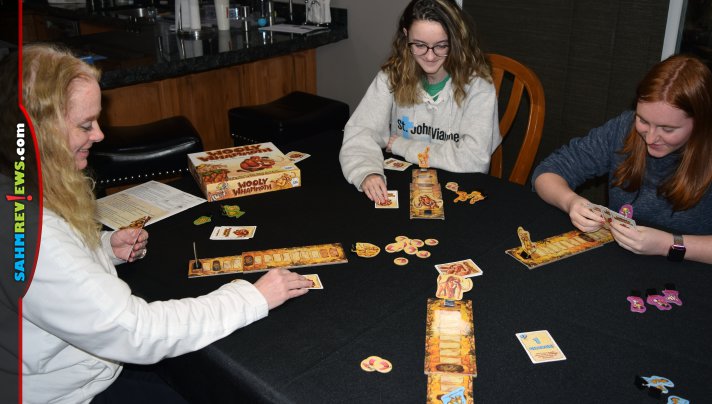 You may remember us talking about playing Honga recently. While it is also a prehistoric-themed game, it’s very different. Wooly Whammoth plays quickly and the only goal is to stay alive and collect mammoth meat. And stay alive. Did I say that yet? Because that’s really the hardest part of the game because you’ll be advancing through the land in an effort to find and hunt mammoth. 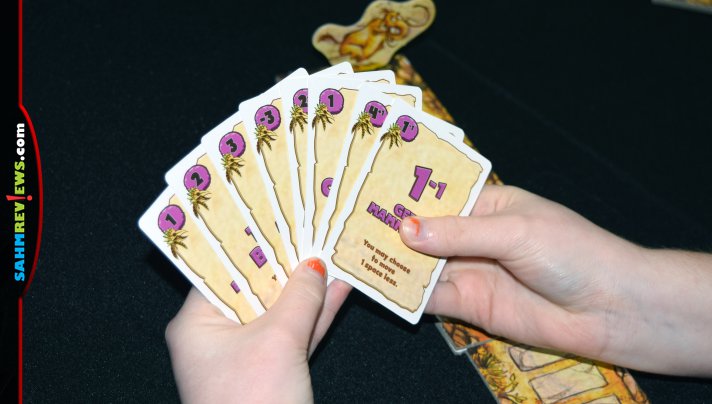 The game is played in rounds with all players simultaneously selecting a card from their hand. Options range from four to negative three. Some cards have you remain still, others allow you to move one more or less than other cavemen while one allows you to duck and ambush a charging mammoth. The interesting thing is that you aren’t using your card to select how much your caveman will be moving. When everyone reveals their selected card, the totals are summed and that’s how far everyone mores, with modifications for +1, -1 and standing still. 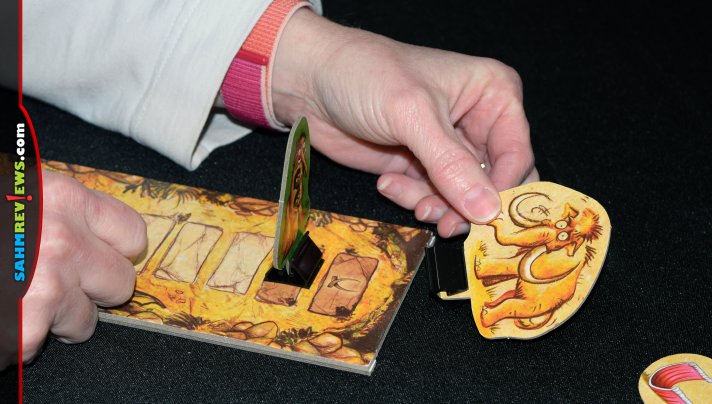 After you take your movements, if you stop in one of the last two spaces on your board, you’ll push the mammoth over the edge and collect a piece of meat. If you’ve gone too far, well, that means you ran over the cliff along with the mammoth. You’ll still collect the meat, but that caveman is out for the game. 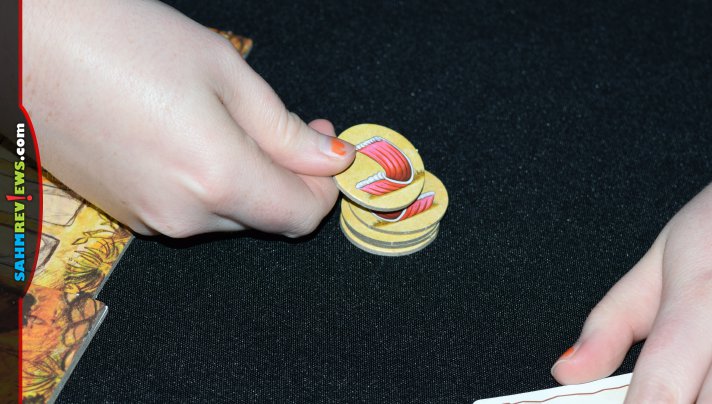 After you’ve played a card, it’s set aside and you’ll use the remaining cards in your hand for the next round. To win the game, you need to possess six pieces of meat. If you’ve realized that you want or need one of the cards you already played, then you can turn in a meat token to recover all your used cards. 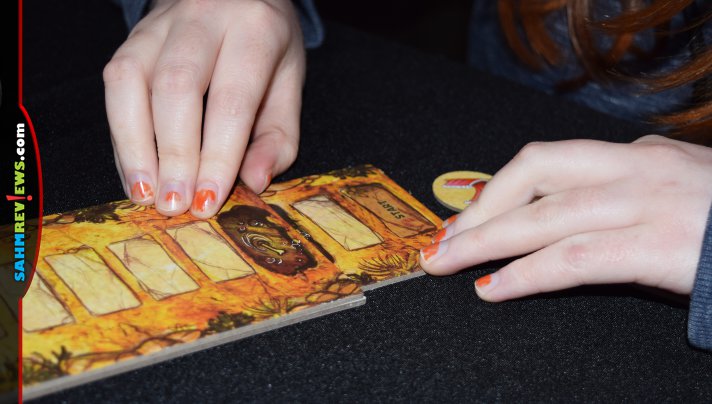 Of course, if you’re killing mammoth near your cave, then eventually you’ll need to trek further into the wilderness to find more. To simulate this idea, you’ll extend your modular game board by one space each time you’ve killed mammoth. This makes it more difficult to reach the end of the board and puts more tar pits in your path. In case I didn’t mention it before, anyone that ends their movement in a tar pit perishes. If that’s you, then your caveman is out of the game. If it’s the mammoth, at least you collect the meat!

One last bit that makes this extra difficult is that some cards in your hand are marked, “Charge”. When any player selects and plays one of those, a Charge Card is drawn from the top of the deck and any mammoth that didn’t go over the cliff now moves that many spaces toward the caveman. If more than one charge was played, then multiple multiple Chard Cards are drawn and combined.

As you can see, there are lots of ways to die and only a couple ways to collect mammoth meat. So in addition to the game goal of having six mammoth meat, an alternate goal is to be the last tribe with cavemen alive! It’s a quick game and the tide can change quickly between opponents. It’s family-friendly and good for a laugh. If you’re ready to embrace your inner caveman, then order direct from Smirk & Dagger or grab a copy from Amazon. If you’re looking for information on what Smirk & Dagger is up to these days, it won’t feel like a mammoth hunt. All you have to do is roll over to Facebook and Twitter. Drop by and let them know you entered to win a copy of their game in our giveaway! Use the form below to enter!