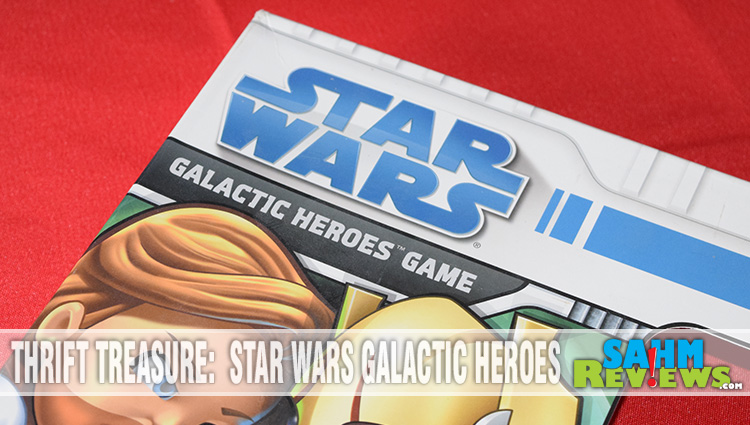 Later this year Star Wars: Episode VII – The Force Awakens hits theaters, and with it a new generation of kids will enjoy the epic battle of Rebels vs. Empire. We’re already starting to see merchandise hit the shelves at our local retailers, and I would not have guessed we would find any Star Wars items at our local thrift stores. But we did happen across a copy of Star Wars Galactic Heroes – Obi-Wan Kenobi vs. General Grievous.

Originally issued in 2008, the Star Wars Galactic Heroes game was part of the highly-successful line of kid-appropriate action figures. Running from 2004 through 2010, kids of all ages could collect, trade and play with characters from the Star Wars universe and wait in anticipation for the next wave of figures to be released.

In this two-player game, each person takes on the role of a famous Star Wars character. One plays the evil Empire while the other represents the Rebel forces. In our version Obi-Wan takes on General Grievous in a fight to the death. 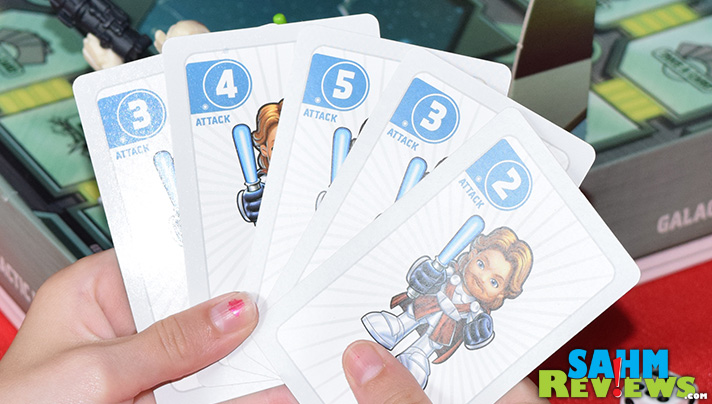 Each player receives one die, a deck of cards for their faction, six avatar puzzle pieces and a mini action figure of their character. Five cards are drawn from each deck for the player to hold, creating their battle hand. On your turn you roll a die and move your figure the corresponding number of spaces. Your result will either be “Draw a Card” or “Battle”. 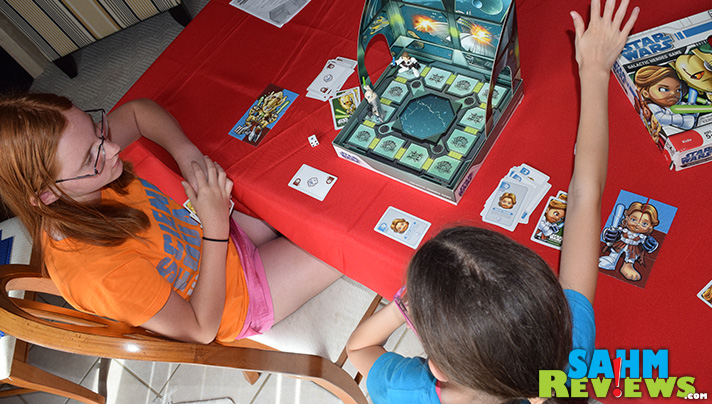 “Draw a Card” is obvious – you draw a card from the draw pile and add it to your hand. Your hand may not hold more than seven cards, so if you are drawing and already have the maximum number, you must discard one before you draw. 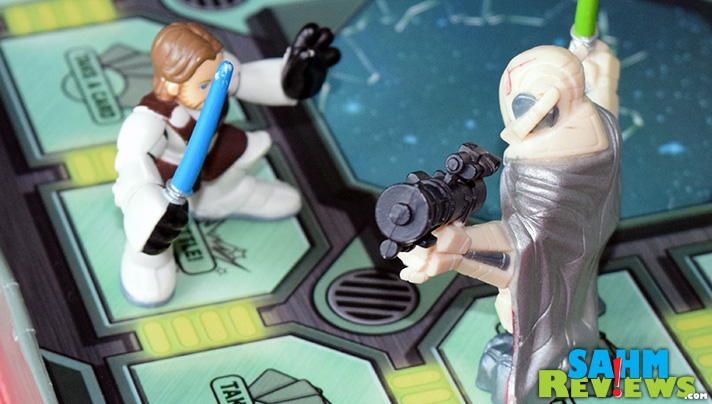 If you decide to “Battle”, then you attack your opponent by selecting one card from your hand, placing it face-down on the table. Your opponent does the same. Exactly like the classic card game “War”, when the cards are revealed, the highest card wins. If there is a tie, each player repeats the process until there is either a winner or one player is out of cards. 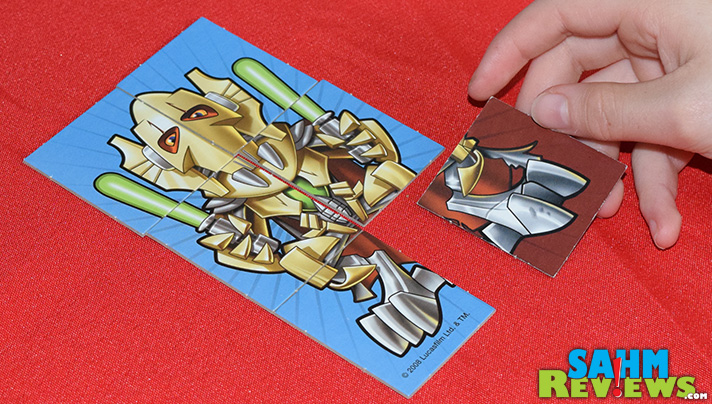 The losing player then turns one of his avatar pieces over, revealing damage to that part of the body. Players take turns moving around the board (arena), gathering extra cards and battling each other until one player loses a total of six fights. 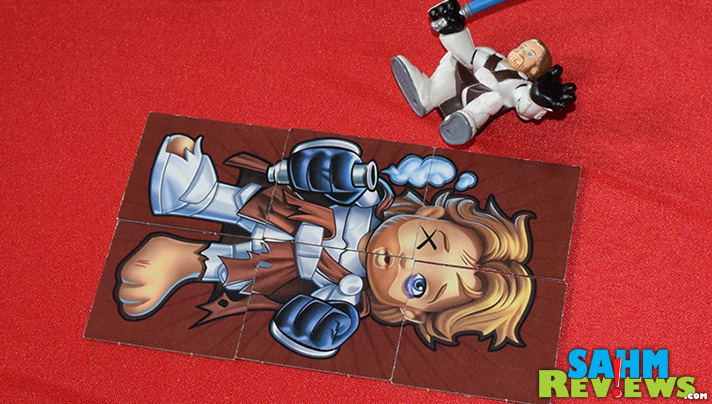 Each side also has its own “Special Attacks” that can be played instead of a numbered card. If you play one, you simply follow the instructions on that card when resolving the battle. 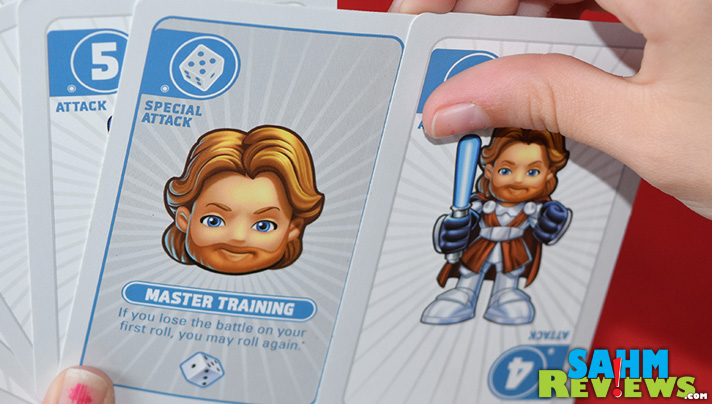 And while this game is plenty fun with two players, there is a unique option available. By purchasing other 2 vs. 2 titles in this line (Anakin Skywalker vs. Count Dooku  or Clone Trooper vs. Super Battle Droid 3D), you can combine them together to create a fun team vs. team battle or even a free-for-all! 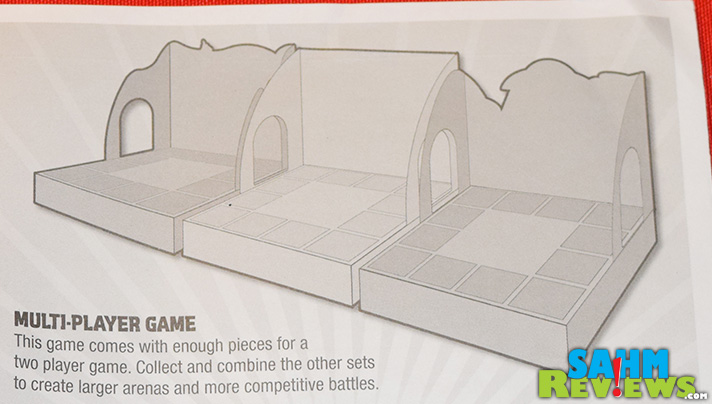 Star Wars Galactic Heroes is a quick 15-minute game for ages 5 and up. Unfortunately it is no longer made, so you’ll either have to keep your eyes open at your local thrift stores and yard sales, or grab an inexpensive copy off of eBay. With the upcoming release of the latest episode, these certainly won’t sit on shelves for very long!