I recently discovered that we know a lot of teens on the local rowing team. It isn’t a school sport, but rather a community team. Several years ago I remember talking to my coach at the Y regarding her participation with a competitive team. It was a U.S. national team or something and they competed and won international competitions. One time I asked about her rowing career and she politely educated me on the difference between rowing teams and dragon boat racing. When I saw Dragon Market from Blue Orange Games with images of boats on the cover, I instantly recalled that conversation. The game has nothing to do with that sport. It’s actually about traversing from boat to boat in an effort to collect gifts for the Princess.

A game of Dragon Market can play 2-4 people, but setup is the same regardless. Place the board on the table then take turns adding boats to the board. After all boats are floating in Dragon Bay, two identical Merchandise Tokens are added to the cargo spaces on each boat. The four corners of the board display pontoons of four colors. Players take the Heir matching the color facing them and places it on their respective corner. Shuffle the blue objective cards (the red ones are for an advanced game) and make a face-down pile next to the board. Take one and set it face-up in front of you as the first objective you’re trying to achieve when the game starts. Create a general supply of coins then provide an allotment to each player based on their turn order. 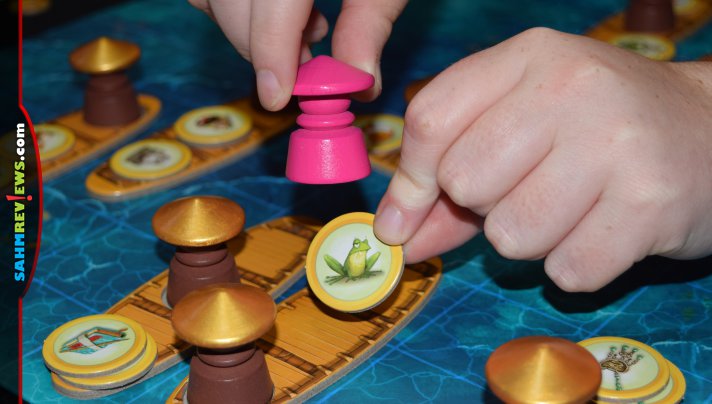 Your goal is to be the first player to complete two objective cards by collecting the items displayed on the card in front of you. You do this by moving, rotating and jumping from boat to boat!

On your turn, you’ll roll the dice to determine how many actions you can take. The number of points on the dice is how many you’re allowed. You may spend those actions by moving boats, turning them or moving your heir. You may use one action to move a boat forward or backward any number of spaces in one direction. As an alternative, you may pivot the boat based on where the boat’s sailor is positioned. In order to rotate, there needs to be room so take that into consideration when planning your path. 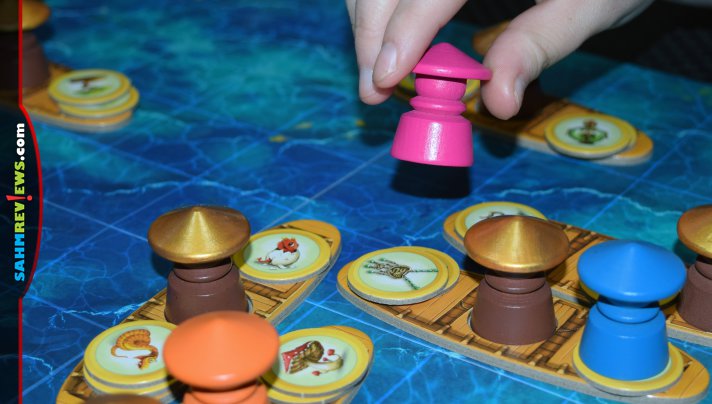 Of course, the purpose is to ultimately get your heir from their pontoon onto the various boats that contain the treasures you are seeking. So you’ll need to eventually jump from one boat to the next. This is another way you can spend your movement actions. Unlike moving the boat (which takes one action), each square you cross costs a movement point. You cannot move over sailors, but can move past other players. You’ll be collecting merchandise as you leap about so it doesn’t cost an action point to do so. 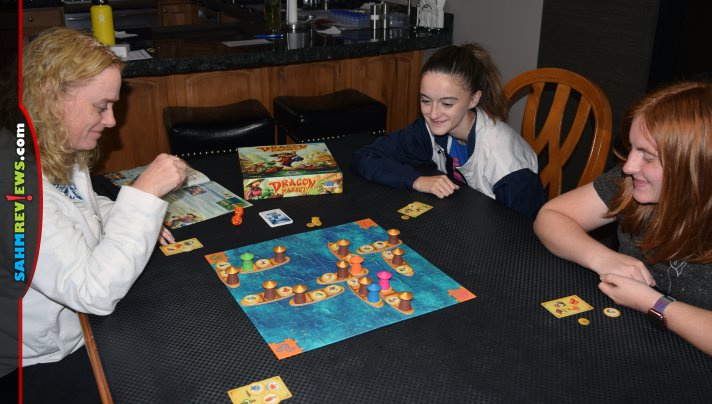 If you choose not to utilize all your action points, you can collect a coin for any unused movements. If the general supply runs out of coins, you may take them from the player with the most. One or two coins can be spent to take additional movements during your turn. 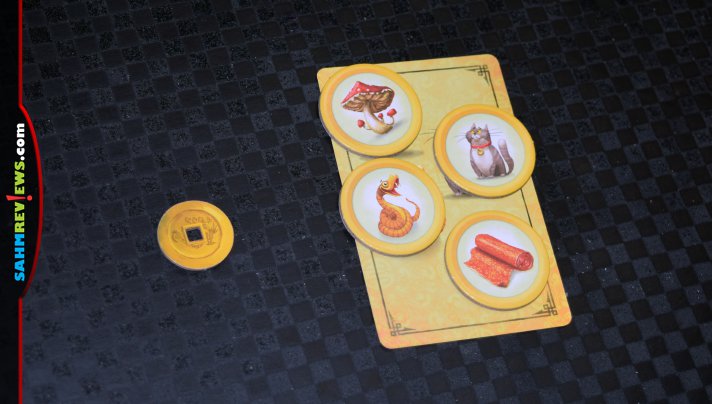 Once you’ve collected all the items on your objective card, start making your way back to your pontoon to secure them. Those tokens are returned to the box, your card is flipped face down and a new one acquired from the top of the draw deck. The first player to complete two immediately wins Dragon Market.

In addition to the standard and advanced objective cards, you can also opt for the team variation. This gives the game some variety while also allowing younger kids to join in. As with most titles from Blue Orange Games, Dragon Market is a family-friendly game. You can find copies on their website as well as on Amazon.Paddle over to Facebook and Twitter to see what other games they offer for game night.

Have you ever jumped from one boat to another?