Every time I play a game that uses multiple meeples, or any wooden component for that matter, I can be found stacking or arranging them while I listen to the rules or wait for my turn. It’s just something to keep my hands busy – I really am paying attention, I swear! Playing with the meeples isn’t usually part of the game. They’re typically for sending out to harvest some goods, fight other players or even build houses. There’s no limit to how they’ve been used in games over the years.

A couple months ago, Atlas Games released a brand new game that may have you dancing in the aisles. Breakdancing Meeples is an inexpensive title that comes in an attractive tin box. As you might have guessed from the title, your meeples won’t be doing anything boring like gathering sheep or trading its wool for wheat. Instead, they’re pounding the pavement 80’s-style by breakdancing their way to the win. 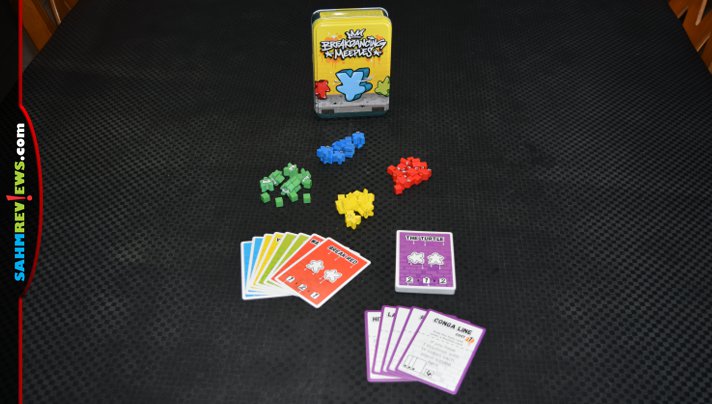 Inside the tin box are 24 meeples of four different colors, 24 cubes also of the same four colors, 31 routine cards and 5 rally cards. Each player (up to four are supported in Breakdancing Meeples) begins the game with a full set of colored cubes and meeples and a matching set of two dance routine cards. The rest of the cards are shuffled and set in the middle of the table. Your two routine cards are laid out in front of you face-up. You’ll also need a 1-minute timer (not included), so grab your cell phone and use the stopwatch or download the Breakdancing Meeples app from your app store.

Breakdancing Meeples plays a lot like Roll for It, except you aren’t taking turns. Instead, everyone is playing at the same time. When the timer starts, you will roll all of your meeples as if they were dice. You are trying to get them to land in one of the valid positions that match the locations on your routine cards. A meeple on its back is not dancing, so those are no good. One on its side, feet or head may match an icon you need. If you elect to put it on the card, it is locked in that position until the routine card is complete. Any unused meeples are re-rolled. 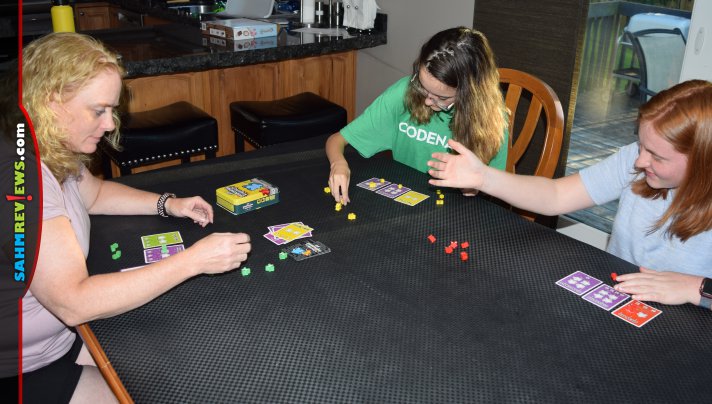 Once you completely fill up a card, call out the name of the move and take one of your cubes and place it over the first square at the bottom of the card. Those meeples are now free to be rolled and used again, as is the card. You can fill up the cards more than once as long as there is an open space for a cube. If you run out of cubes, you are finished for the round. When the timer goes off, everyone stops rolling and places any remaining valid meeples on their cards (and redeems them, if possible). 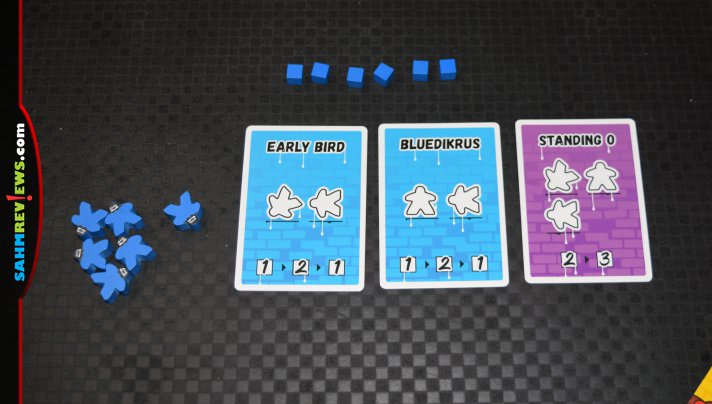 All players tally up how many points (Crowd Appeal) they earned for the round by removing the cubes and summing up the numbers underneath them. After each dance off round, new cards are dealt from the deck equal to the number of players plus one. Each person, in order, may choose to add a new card to their repertoire. You have a strict limit of three dance moves, so discard down immediately if you have more. 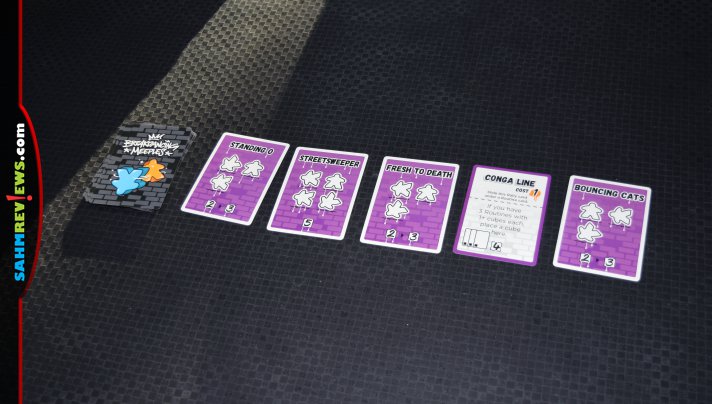 There are also rally cards mixed into the deck that you may purchase with Crowd Appeal points instead of drafting a new move. These are attached to another routine card and provide additional points if completed by the end of the round. A few of the routine cards are a little different in that they don’t award points at all. Some of them unlock a special ability that allows you to use any two matching dancers and exchange it for another. While it doesn’t directly add to your end-game score, the flexibility will certainly help you fill more cards quicker! The player with the highest total after four complete rounds is the winner of Breakdancing Meeples!

If you already have Roll for It in your collection, this may be a duplicate since they play very similarly. The speed element of Breakdancing Meeples will certainly be more attractive to younger players, even if they have no idea on how to do “The Worm“. Ask for a copy at your favorite local game store or purchase it direct from Atlas Games on their website. At the time of this article, it looks like only 3rd party sellers have it for sale on Amazon, and unfortunately at a price above MSRP. If you’re curious about what other moves Atlas Games will be busing out, follow them on social media (Twitter, Facebook)!

What is your favorite breakdancing move?