If you had asked me months ago what I thought would be the most likely thing or event to disrupt our lives, I probably would have listed off a number of things. The upcoming election season, natural disasters, terrorism and threats from other countries would’ve all come to mind. In no scenario would I have considered a micro-organism in the form of a virus could change our everyday lives as much as it has.

In March we shared a great list of thematic board games to play during the pandemic, but now that it’s five weeks later, we honestly don’t want anything to do with anything virus-related. Instead, we’re swapping out one crisis for another by playing We’re Doomed! by Breaking Games.

We’re Doomed! is a semi-cooperative game for 4-10 players where everyone is working to build a rocket ship to escape our doomed planet. It’s a race against time as we only have 15 minutes to work together. Unfortunately, there may not be enough seats in the rocket for everyone, so only the most influential will make the trip. Everyone else will perish with the rest of the world. 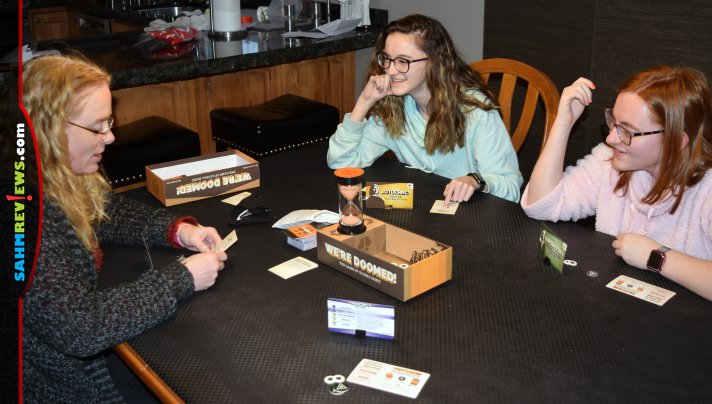 Setting up for a game of We’re Doomed! is very quick. Empty out the box bottom and place it in the center of the play area with the HUGE 15-minute sand timer on top. Gather Civilization cards matching the number of players and allow everyone to choose one. All players also receive a Reference card. A deck of unshuffled Event cards are also set out within reach of everyone, as are two token bags of influence and resources. Choose a first player and you are ready to begin! 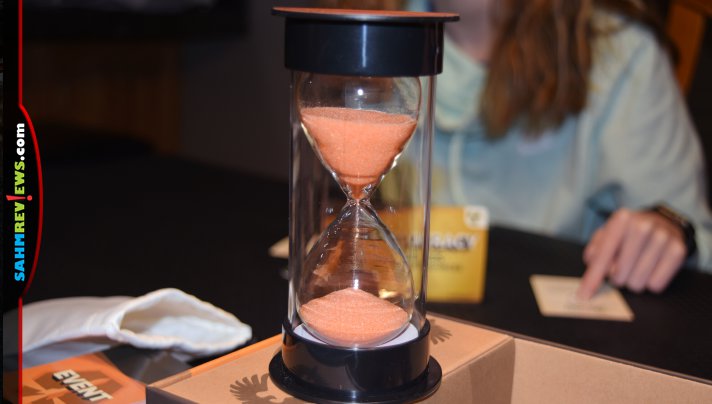 The game starts when the timer is flipped by the starting player (note – this timer is amazing!). Beginning with the first player, each person will take one action from a list of five. Each civilization type receives a discount on one of the actions, but all five are available to all players for a price. You can choose to produce and gain two resource tokens. Another option is to indoctrinate and gain an influence token. When propagandizing, you will spend one of your resource tokens to steal an influence from another player. You might also elect to invade, spending an influence to steal two resources from a competing civilization. Lastly, you can spend eight resources to nuke another player out of the game!

Whichever action you choose, announce it out loud before commencing. If either token bag is empty, you may not take that associated action. Once everyone has taken one action, all players now contribute to the pool. There is no turn order during this phase. Everyone simply shouts out how many of their resources they are contributing to the project and puts them into the box bottom. Think of it like an auction, where the person who contributes the most will become first player during the next round and gain an influence token. If there are ties during the bidding process, they are broken by a vote among the other players. If still tied, vote again. Remember, the clock is ticking! 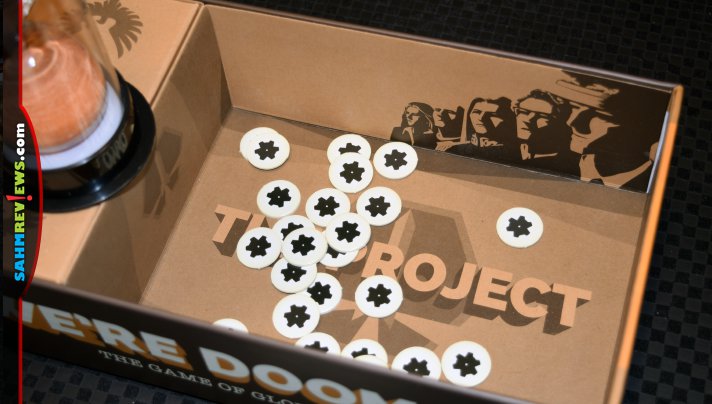 Between rounds, an Event card is drawn by the new first player. Dark cards are read silently, while light cards are read out loud. The Event cards in We’re Doomed! are occasionally helpful and seldom convenient. And in all cases cost you precious time! The rules of the event trump the rulebook and are usually discarded when completed. Some will remain in effect for the rest of the game. With 100 different Event cards in We’re Doomed!, no two games will play out the same. 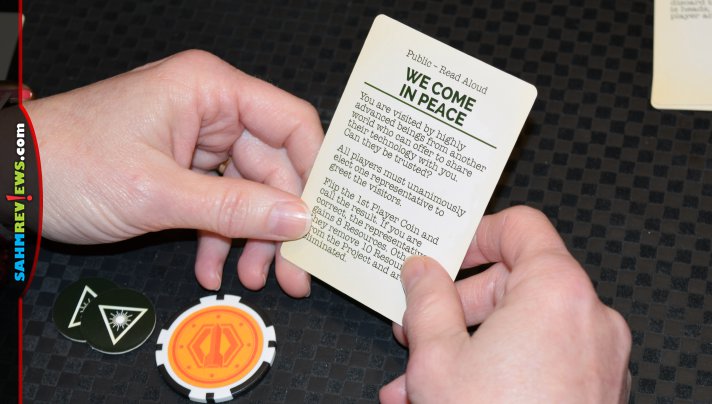 Rounds continue in the same manner until the sand timer runs out. The game ends immediately (complete any events in progress) and the resources in the box are counted to see how many seats were built in the rocket. A handy chart in the rule book and on player reference cards shows how many you’ll need to support the number of players. If there are not enough seats for everyone, they are assigned by influence. Anyone without enough influence to earn a seat is left behind. Everyone else wins by escaping to victory!

If you’re looking for a world-ending game that doesn’t involve viruses, pick up a copy of We’re Doomed! on Amazon, direct from Breaking Games or via your favorite local game store. Follow them on Facebook or Twitter to find out more about their other great titles. Hurry, before the next disaster hits!

What did you think the biggest threat to our lives would be before this pandemic?