Have you ever noticed that some brands can be famous for one thing then branch out into something completely different to diversify? In some cases, the synergy between the products works and makes sense and other times it doesn’t. Some schools of thought are that companies should stick with what they know best. On the flipside, when was the last time you bought a VHS tape? Sometimes you change because you have to.

We’ve worked with publishers in the board game industry for many years now and there are definitely some that get pigeonholed into a particular game style. In some cases, it comes with the territory when you have a couple games that are wildly popular in a designated genre. However, others do it intentionally for focus then branch out when they’re ready to expand their brand. Twilight Creations is best known for brain-eating, zombie-themed games that can be a bit graphic, but have been known to release a PG-version of Zombies!!! as well. They’re breaking from their standard fare to publish something filled with candy and a little friendlier, The Island of Misfit Friends. And when I say it’s friendlier, I use that term lightly because this game is filled with back-stabbing, every-man-for-himself tactics.

Looking at the board, you’re probably asking yourself how a candy-filled game could be anything but cute and lovable. What a great question; I’m about to answer that! You and your friends are stuck on an island with a greedy king who has discovered candy hidden on the island. Everyone wants off the island but one and only one person will get to leave. That means you’ll be trying to make sure you’re that one person. You’ll use candy to bribe the the island workers to provide the tools you need to escape and at the same time, you’ll be working to inhibit the progress of everyone else. You aren’t throwing your friends at zombies, but you aren’t helping them achieve their goals either. Does that clear it up a little? Each player selects a character color. The candy tiles are randomly populated onto the board and stacks of bribery cards are placed on each corner of the board. Players are dealt three event cards and the game is off and running! 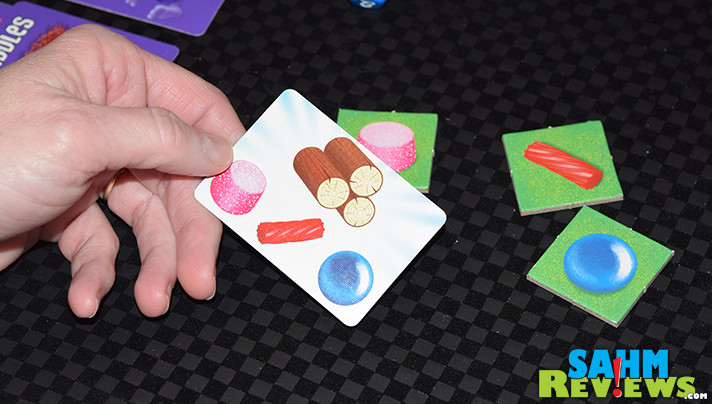 The goal is to complete the tasks on one of each of the four kinds of bribe cards. Those cards are acquired when one of your player markers lands on a hut in the corner of the board. Each corner has a specific type of bribe, cloth, wood, tools and rope) but all bribe cards depict a random assortment of candies. When you’ve collected all the candies on the card, you discard those candies and reveal the completed card. The board is filled with all these candies, so how hard could it be? Run around and pick up what you need, right? Wrong. Remember the previously-mentioned back-stabbery? THAT. Oh, and the process of getting to take actions isn’t a piece of cake either. 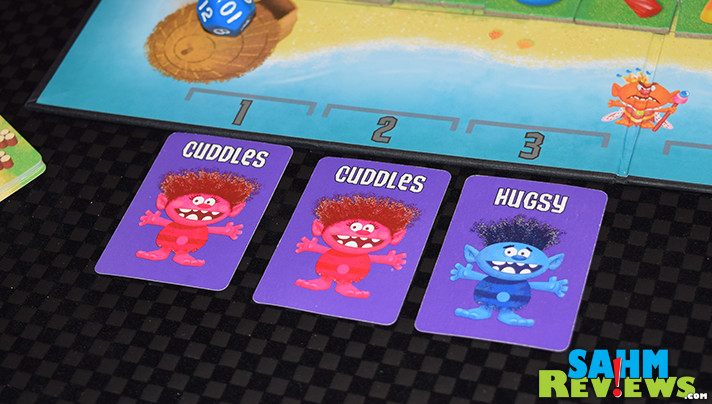 The order mechanic in The Island of Misfit Friends is pretty interesting. Each player has three movement cards (or 2 cards when 5-6 players) that are randomly mixed together in one deck. A card is dealt into the “1” spot at the bottom of the board. The player color depicted on that card gets to take ONE movement. I’ll get back to what a movement is in a minute. After the first player has completed their turn, a card is flipped into the “2” spot and they complete their turn. Then a “3”. After that, the evil king gets an action and the D20 die is rolled. A piece of candy corresponding to the number rolled is removed from the board. The process continues with 3, 2 and 1. Down and back in the action spots and that’s the round. 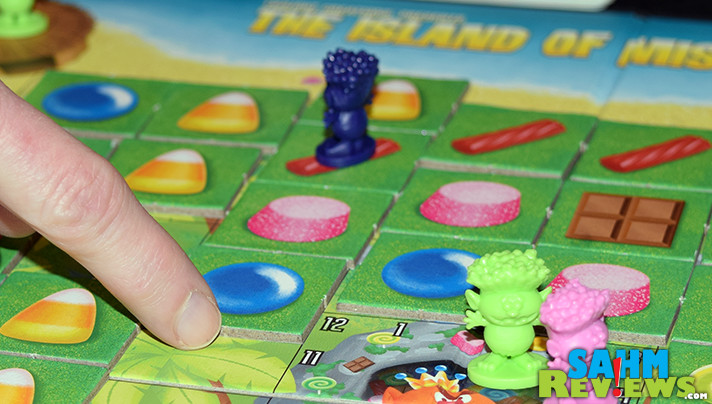 So what exactly do you get to do on your turn? If you get a “1” then you can only take one action. Either move one of your characters one space in any direction or move a row or column of candies orthogonality. There’s actually an extra bonus you get with that one slot, but I’m not going to gum up the candy machine with those details right now. If you get a “2” or a “3” then you may move ONE character that number of spaces in any direction or you may move ONE row/column that number of spaces, sliding your pawn along with the moving candy. If you’re able to stand on a piece of candy that lines up with two others like it, you get to collect the piece you are on. Chocolate in the game, as in real life, is magical. You can collect a piece of chocolate if you’re standing on it and it’s adjacent to three identical candies. 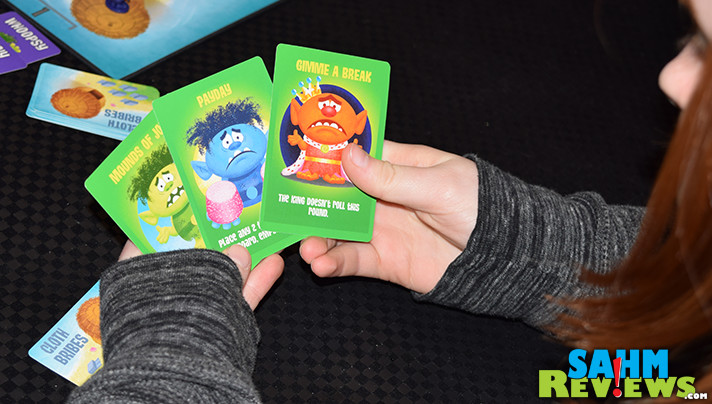 Turn order is unpredictable so you may be in close proximity to three identical, line-up candies but can’t get there unless your movement card comes up OR someone moves the candy tokens and it works in your favor. You’ll be able to collect the candy piece as soon as you meet the requirement, even if it isn’t your turn. But once again, it can’t be that easy. Remember at the beginning of the game when you received three event cards? Those say things like “Take one random token from another player,” “Move 2 tokens of different kinds to other empty squares on the board” and “All players return any one player piece to the center.” At the end of each round (that’s the down and back on the action spaces), players draw back up to three. Basically, there’s a lot of incentive to use those cards and as you can see, they aren’t working to anyone’s favor.

After all those complications, someone eventually will have collected and completed their four bribe cards and escaped the wrath of the king. It’s not blood and brains like a Zombie game, but it’s definitely not an easy win either. I think Twilight Creations is onto something with this new, colorful style of game!

The Island of Misfit Friends plays from 2-6 people and can be enjoyed by kids as young as 8. If you have gamers in your home, you could probably push that limit a little younger because it utilizes principles of matching that are commonly seen in apps. However, since the game utilizes event/action cards that have text, it’s important that all players are able to read and comprehend those. You can pick up a copy of direct from the Twilight Creations website for around $35 or on order The Island of Misfit Friends from Amazon. If you’re curious what else they are up to, find news and updates on Twitter and Facebook.

Do you like seeing brands think outside their normal product line?

7 thoughts on “The Island of Misfit Friends Game Overview”