One of the coolest things about being involved in the toy & game industry is that we get to see hundreds of ideas come to life every year. Sometimes we’ll see a prototype at the Chicago Toy & Game Fair in November, other times it’s a pre-Kickstarter game being demo’ed in a hallway of either Origins Game Fair or Gen Con. We’re asked for our opinions on the quality of the product and overall marketability and are even sometimes tasked with assisting on the design process!

Last June were were able to try out a brand new card game by Devious Weasel Games before production was complete. I call Bemused a card game because its main component is a small deck of cards, but it really is more of a social game. And a very mean one at that. 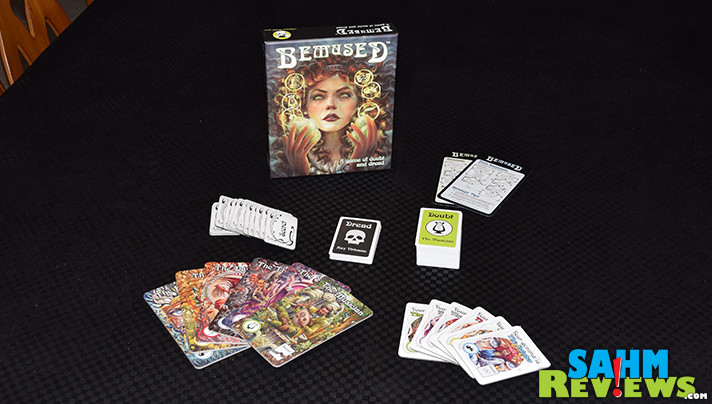 In many games you take on the role of the character you are playing. Bemused is no different in that you become a muse. What makes Bemused a little different is each muse has chosen a human virtuoso as their protégé and wishes to elevate them to the pinnacle of artistic glory. But that’s what the other muses are doing also, and none are more powerful than the other. So the only way to have your protégé succeed is to cause the rest to fail. You will be doing so by casting doubts and dreads upon them until they are driven mad or ultimately succumb to their dreads. 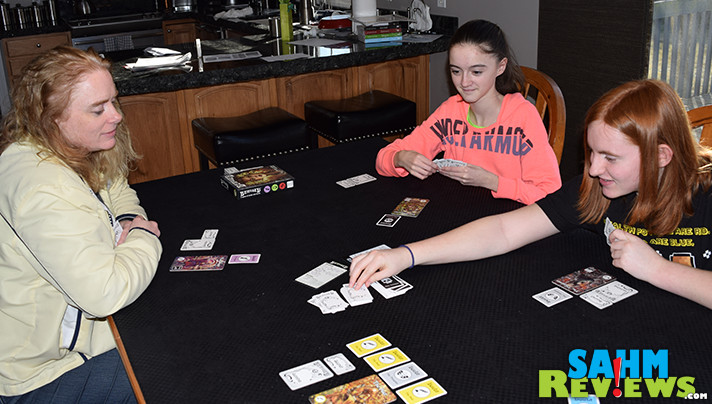 Each muse receives a beautifully illustrated virtuoso card at random, which becomes that player’s protégé. They also are dealt a random gemina card which depicts another virtuoso that they have a special link to. This attachment is kept secret by placing the card face-down in front of you.

There are two types of cards, each kept in their own deck. All muses receive one dread card and four doubt cards to create a starting hand. Every virtuoso harbors a secret and these are randomly assigned by dealing out one to each player. As the name might suggest, it is also kept a secret… 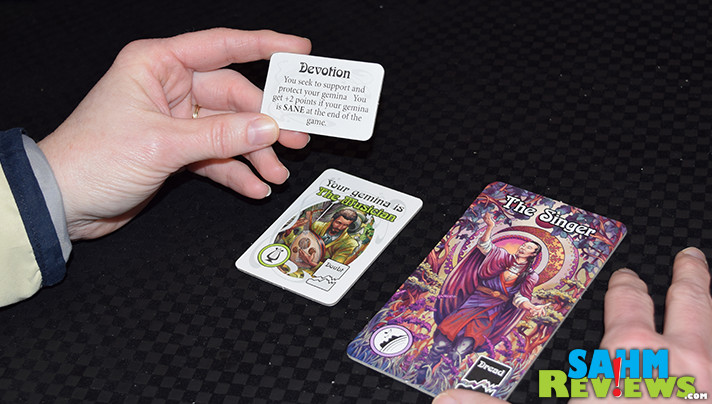 At the beginning of each turn, a muse will draw two cards from the shuffled doubt deck (called the Well of Doubt) and take one action. They may play one of their doubt cards on the matching virtuoso card, plant a dread card onto any virtuoso, use an ability or instill dread by discarding two matching doubt cards and exchanging them for one dread card which is then placed on any virtuoso cards. To use an ability, a muse discards a doubt card matching their own virtuoso and activates their virtuoso’s ability, as long as their virtuoso is alive and sane (more on this in a minute). 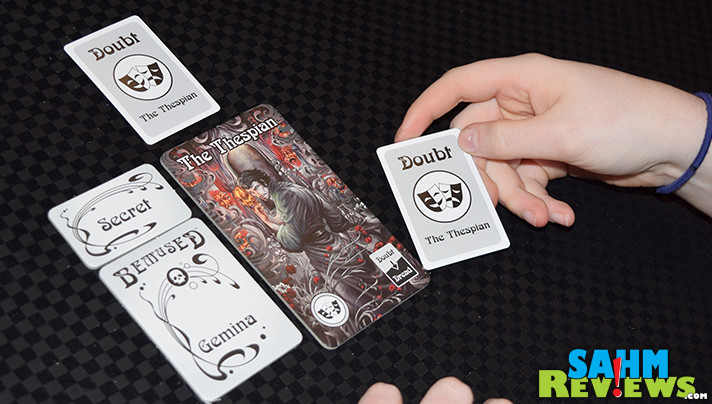 You also have the option of taking a second action as long as your virtuoso is alive and sane, but this comes at a cost. Since you won’t be drawing additional cards before the second action, this will leave you with fewer cards since you will be spending some without replacing them. Plus, at the end of every turn you will be discarding one card, so you will have fewer to choose from! 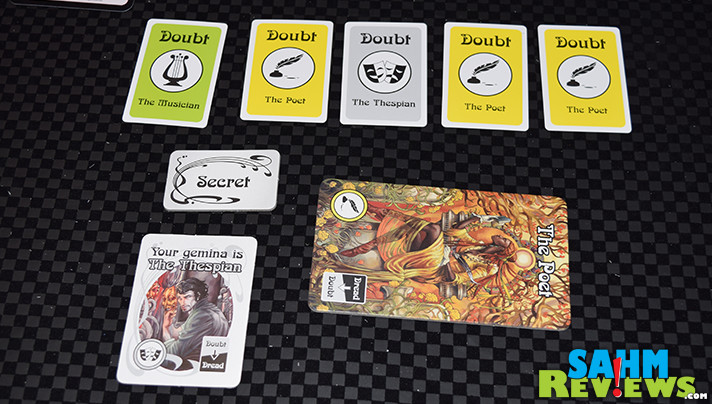 The ultimate goal of Bemused is to be the muse with the only sane virtuoso. Once a virtuoso receives a total of five cards (any combination of doubt or dread cards), they turn insane. While insane you are limited in your actions. You still draw two cards at the beginning of your turn, but instead of choosing which from your hand you will play, you must randomly select two cards and choose from just those and discard the other. You cannot instill dread on another player and do not have the option of taking a second action. Your main goal is to get the combined total of cards on your virtuoso back below five so you are considered sane again. 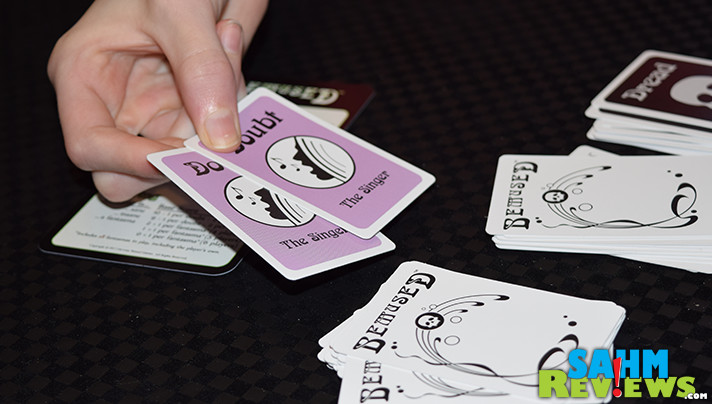 At any time you may reveal your gemina card, which denotes the other virtuoso you have a special connection with. This gives you access to their special ability by discarding a matching doubt card! If your gemina is yourself (you drew your own virtuoso), then you gain the ability to draw an extra card each turn! This is a very powerful ability, allowing you to take an extra action on every turn without worrying about reducing your hand size! 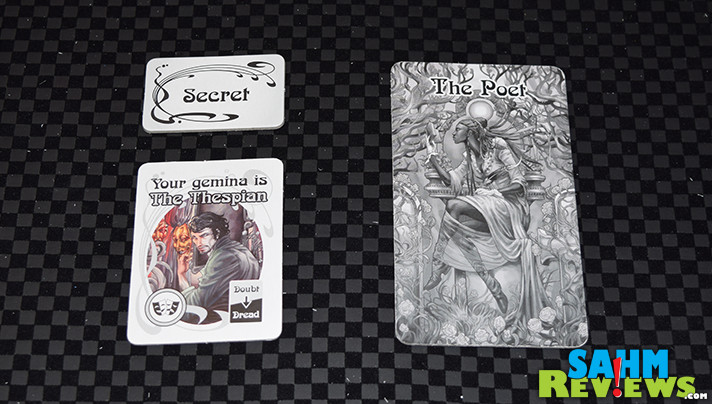 If you have five doubt/dread cards on your virtuoso AND at least three of them are dread, then your virtuoso dies and they become a fantasma (ghost). When this happens, the muse discards all of their cards and flips their virtuoso card over to the black & white side. There is no returning from the dead and your new goal is to turn as many other players into fantasmas as possible (you can still win the game!). On your turn you simply draw one dread card from the deck and place it on any living, sane virtuoso or replace a doubt card on any living virtuoso (they may be insane). Once they have five cards, three of which are dread, they too become fantasmas!

Bemused immediately ends once fewer than two sane virtuosos remain in play. If there is a sane virtuoso left, they receive 10 points, subtracting one for each doubt and two for each dread on the virtuoso card. Insane virtuosos are awarded 9 points, also subtracting for doubt and dread cards in the same manner. Fantasmas receive base points depending on the number of players and an additional point for each fantasma in play, including themselves. Everyone also receives points if they successfully completed the criteria of their secret card! The player with the highest point total wins Bemused!

If you like card games where your actions directly affect other players and never your own position, then Bemused is the perfect title for you. Supporting 4-6 players and lasting around 30 minutes, it is a good value at under $20 on Amazon. Because table talk is encouraged and unofficial deals can be made (and broken) at any time, it is a lot more social than you would expect. Prepare yourself for a lot of backstabbing and broken friendships after a round or two of Bemused!

This is the first game we’ve experienced by Devious Weasel Games, but after looking at their website, we see they have a few more in the pipeline. We’ll work on previewing them to you in the upcoming year, but in the meantime keep an eye on their Facebook and Twitter feeds to see if they’re working on anything new!

What is your favorite backstabby card game?