It’s the bane of every grade school child – learning their times tables. And techniques really haven’t changed at all over the decades. They still use a grid to study from, make homemade flashcards to practice and recite them together in the classroom. I’m sure you still remember the mantra. “One times one is one, one times two is two…” all the way up through the twelves. It’s the stuff nightmares are made of.

And math was my best (and favorite) subject! Maybe that’s why I’d daydream in class about anything else. Rote memorization of math principles was just so dry and repetitive. I’d rather be playing games or watching television. Basically anything but listening to the drone of our teacher. If there were only something to keep us engaged and learning at the same time… 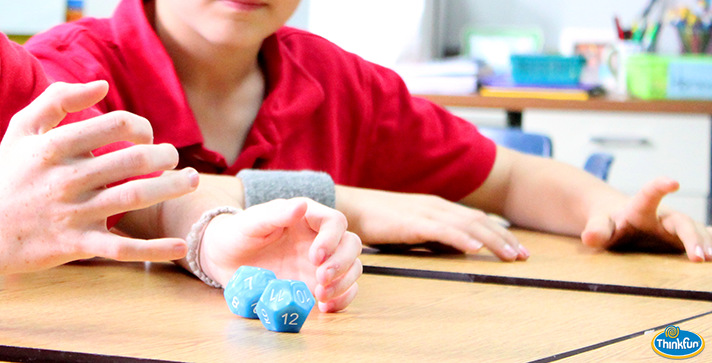 That’s exactly the premise of the new Math Dice line from ThinkFun. Using oversized numbered dice and a set of game instructions, kids can learn basic math skills while having fun at the same time. In fact, Math Dice are already being used in our schools to teach addition, subtraction, multiplication and more.

But don’t take just my word for it. I recently had the opportunity to pose a few questions to Ms. Stephanie McIntyre of Arlington Public Schools about how they’ve implemented Math Dice into their daily curriculum. They have utilized Math Dice for the last three years in their upper elementary grades and have found it a great way to improve fact fluency with basic operations and strengthen their work with more complex concepts (decimals, fractions & exponents). Their students find it much more exciting than rote practice on paper or even online math websites! 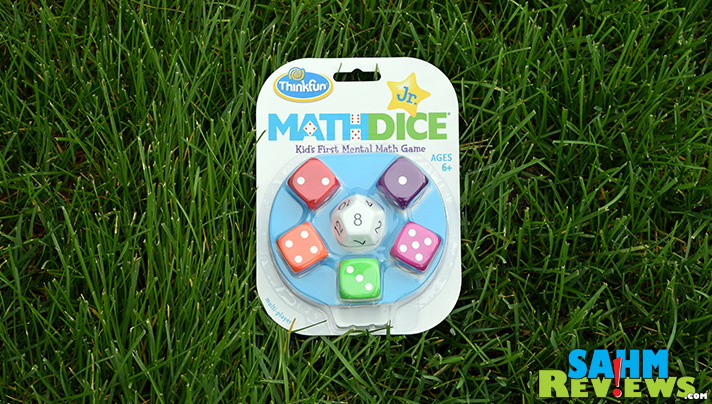 For the younger grades they begin with Math Dice Jr. Billed at “Kid’s First Mental Math Game”, this junior version includes six oversized dice (five 6-sided and one 12-sided), a scoring track, six tokens and a carrying bag. Players take turns rolling the large 12-sided die and then the five 6-sided dice. On their turn they are trying to come up with a total that equals what they rolled on the 12-sided die. For example, if they roll a ten they must find results among the six-sided dice that sum up to ten. For each die they use, they move their token forward one space on the track. First to reach the finish line wins!

The regular version of Math Dice for ages 8+ takes the game to the next level. This time there are two 12-sided dice and three 6-sided included along with practice tables and of course a handy Game-Go bag. Rolling the two 12-sided dice yield a number from the product of their results (for example 4 x 10 = 40). Now you roll the three 6-sided dice and try to create a formula using any mathematical operand the child is familiar with, from addition all the way up through powers, roots and more! Continuing with the example of getting to 40 with a 2, 3 and 5 rolled, you might solve it with this formula: 5 x 23.

The most recent version (and arguably the most popular) is Math Dice Chase. A game for 4-6 players, you might refer to it as a math version of hot potato! The game includes four oversized 12-sided dice in two different colors. Players sit in a circle and two players on opposite sides each take two matching dice and roll. They must then quickly shout out the product of the two resulting numbers and when successful, pass the dice to their left. The next person does the same until one player ends up with both sets of dice in their hands. That person is eliminated and the round is reset with the dice across from each other. Last player remaining after all others are eliminated wins!

And herein lies the problem. Everyone wants to play, but many schools and teachers cannot afford to buy enough sets for their entire classroom or grade. ThinkFun heard the cries and created a set specifically targeted for groups with as many as 18 participants with the Math Dice Tournament Kit.

This super-affordable classroom package includes 6 Math Dice Sets, 15 Blackline Masters, 6 Printable Games, 150 Game Chips and more. I know many of you are always looking for gift ideas for your educators, and this set for under $25 shipped is a sure-fire winner.

Ms. McIntyre is fortunate to have a supportive administration and PTA, along with sufficient math funding so as their use of Math Dice grows they are able to purchase additional sets. As we all know, not all school districts are so lucky. But that doesn’t mean their students wouldn’t have a need for a product like Math Dice. I encourage you to consider buying and donating a set (or six) to either your local school or one that you know is in great need. Because I know you hated times tables also.

You can connect with ThinkFun via Facebook or Twitter and be sure to check out all their other cool products we’ve featured recently! I’m sure you’ll find a new favorite!

What was your favorite subject in school?

14 thoughts on “Why Isn’t All Schoolwork Done This Way?”