Many, many, many years ago, we had a perpetual collection of cereal in our little apartment. Despite lacking the space to store it, I bought it… because it was cheap (or free). The area above the kitchen cabinets that normal people use for decorations became my cereal shelf. And it made me happy.

The sad and sorry part is that I was buying it faster than we were consuming it. Mainly because most of what I was getting was destined for meatloaf and honestly, we didn’t eat meatloaf THAT often. Aside from that, breakfast wasn’t a priority and we didn’t have kids to help deplete the food supply.

(Some) things are different now. We’re eating healthier now or at least have some consciousness about what we are eating. We never skip breakfast because it’s the fuel that gets our bodies ready for the day. Sometimes we eat oatmeal and sometimes granola bars or eggs but for the most part, cereal is the meal of choice. We easily polish off a few boxes a week between us. 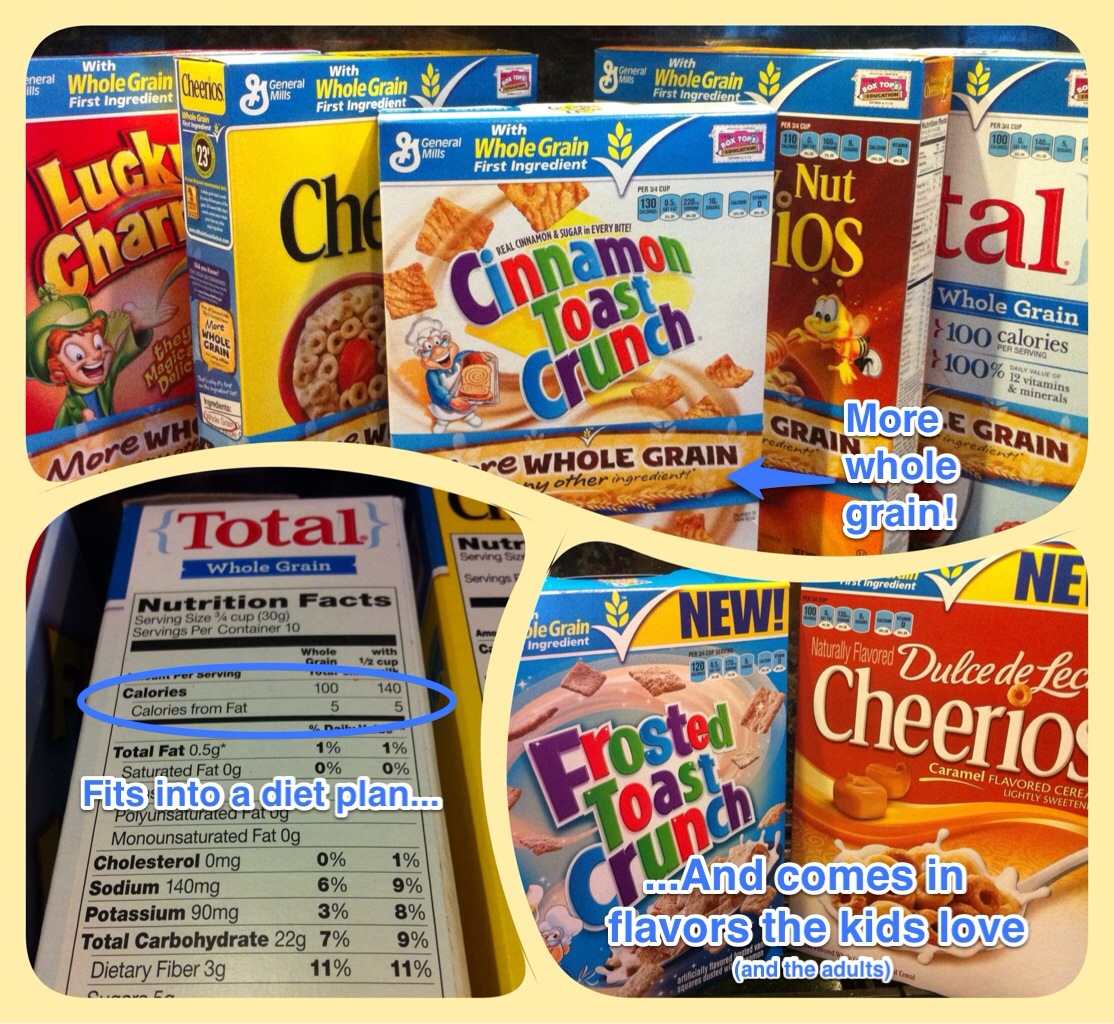 As a result, we put more thought into what we purchase. Not only do we buy what we like but we look at calories and ingredients, too. We’ll gladly buy something new if it looks/sounds good, if the price is right or if we just want a change of pace. The other day, we went to the store and purchased some of hubby’s favorite cereal but we also purchased some new ones to try – General Mills Peanut Butter Cheerios and Dulce de Leche (Caramel) Cheerios. At 100 calories for 3/4 of a cup, it worked into my calorie plan as well as provided some spice to breakfast in the form of something new! There was a third new box along side it, Frosted Toast Crunch, but we didn’t purchase that one. Figured we would start with two new ones then purchase it when those were gone. Lo and behold, a complimentary box arrived via Pssst and I have to say that Miss M LOVES them.

Then our cereal situation took another turn.  As part of a campaign for MyBlogSpark, we received 5 more boxes of cereal. Yes, 5 more.  Thankfully, they are flavors that we like and that fit into our diet plan.  Actually, anything fits into our plan as long as we use portion control and account for it!

Anyway… General Mills continues to release new flavors while improving their tried and true by adding more whole grain! Each cereal with the white check contains AT LEAST 9 grams of whole grain per serving.  There are over 50 varieties, including the new flavors I mentioned.  (We’ve become label readers since changing our eating habits and it’s very interesting!)  Of course, all these cereals come with the Box Tops for Education seal that we all know and love so much.

I don’t know about you, but I love getting free stuff in the mail.  Especially stuff I have to buy anyhow.  So today, I’m giving you the opportunity to do the same.  General Mills, by way of MyBlogSpark, is giving me an additional 5 boxes of “white check” cereal to give to one of my readers.  I received Lucky Charms, Cheerios, Cinnamon Toast Crunch, Honey Nut Cheerios and Total.  They’ve indicated the prize will be “5” boxes of General Mills cereal with the white check” but I don’t know if those will be the same 5 boxes or different ones. Either way, it doesn’t cost anything to enter. And with Rafflecopter, entering is extremely easy!