Unlike many women, shopping for clothes and shoes just isn’t my thing.  I don’t enjoy it and avoid it until my husband tells me I need to update my wardrobe.  Instead, I’m perfectly happy perusing the aisles at someplace like Best Buy – checking out the latest in technology.

No, I’m not looking for a new camera… or computer… or video game system… but that doesn’t stop me from looking.  Seeing us move one step closer to life like the Jetsons is just too much fun.

I want to start by giving my opinion of tablets in general.  I love them. Unfortunately, too many people say “I have a laptop, I don’t need a tablet.” But they’re mobile in ways that a laptop isn’t. How many times have you been watching a TV program, saw someone your recognized or enjoyed watching and wanted to look them up online?  With a DVR, you could easily pause the program and head to your computer to research. But would you? Probably not. Even with a laptop, would you tote it to the couch, boot it up and find what you were interested in? Probably not. With a tablet, it’s pretty seamless and it’s extremely often that we look up things, products, people while we’re watching TV or just on the go.  It’s invaluable.

What about kids? Are tablets good for kids? Yup. In my opinion (in moderation and with supervision), they are. There are plenty of apps available that are kid-friendly. It’s also an educational tools. The other day, my daughters were working on homework and one asked about a chimpanzee. I loaded up photos of chimpanzees on Google Images. While I don’t condone the idea of purchasing something of this price range as an everyday gift for a child, if you’re someone who purchases one ‘big’ Christmas present for the family or the kids, then a tablet is worth looking into. I put together an overview slideshow of my research and encourage you to check it out!

Now, what about the Motorola Xoom? Like other tablets, there are a few options for capacity and feature. When I researched online, I discovered that the Xoom offers a family version with WiFi, a 3G and a 4G LTE. The size is generally the same as other tablets, as is the weight. 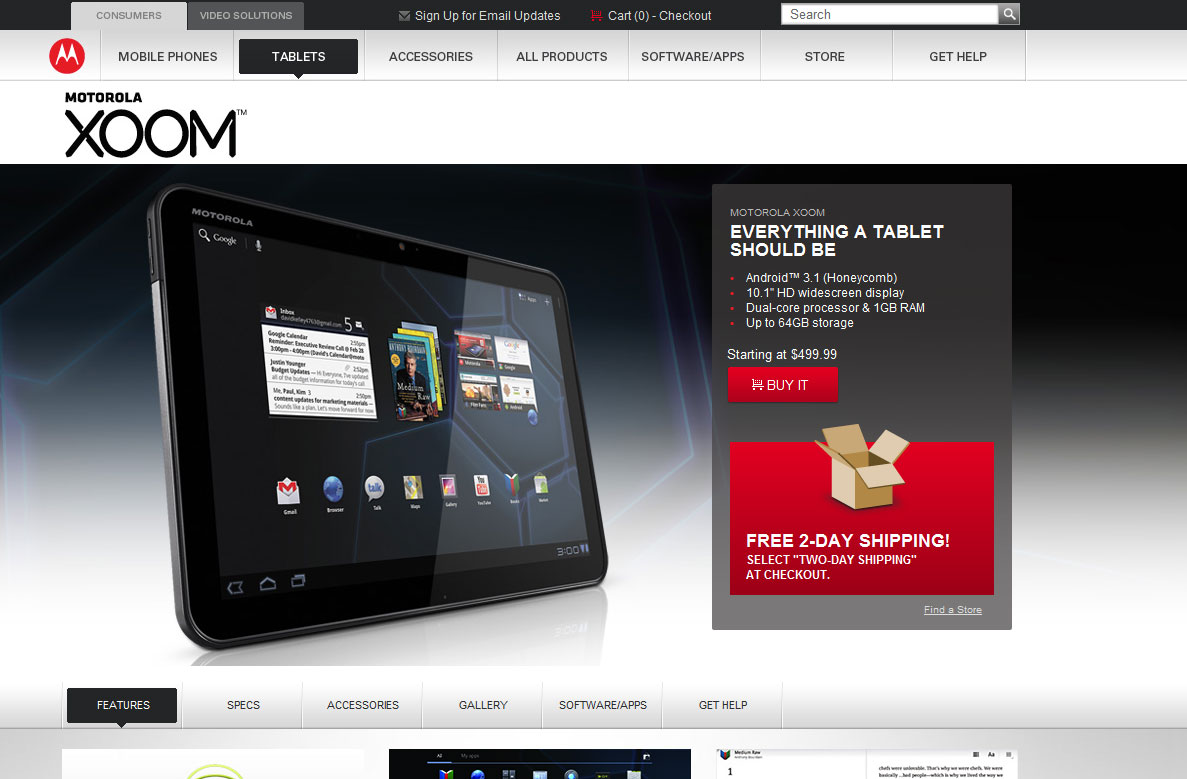 The Motorola Xoom offers both forward and rear facing cameras The rear facing camera is 5MP while the forward facing webcam is 2MP. Not only does i boast a 10.1″ widescreen HD display but it also captures high definition video.  For specific stats, I encourage you to check out the Motorola website. 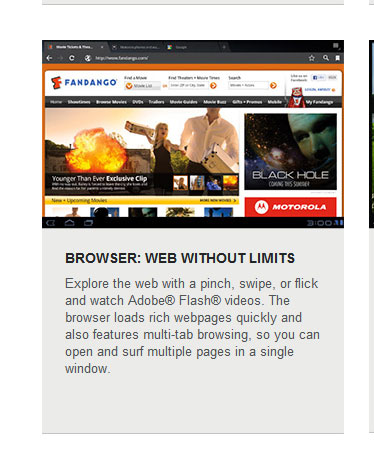 So what makes it different from other tablets? Well, there are a few things that make it different. Most notably is that is is flash-enabled. If you’re saying to yourself “Flash? Big deal. I can do without Flash.” Well, let me tell you that you have NO IDEA how many websites run Flash until you don’t have it. While larger companies are savvy and try to accommodate mobile devices, Flash is still very prominent. 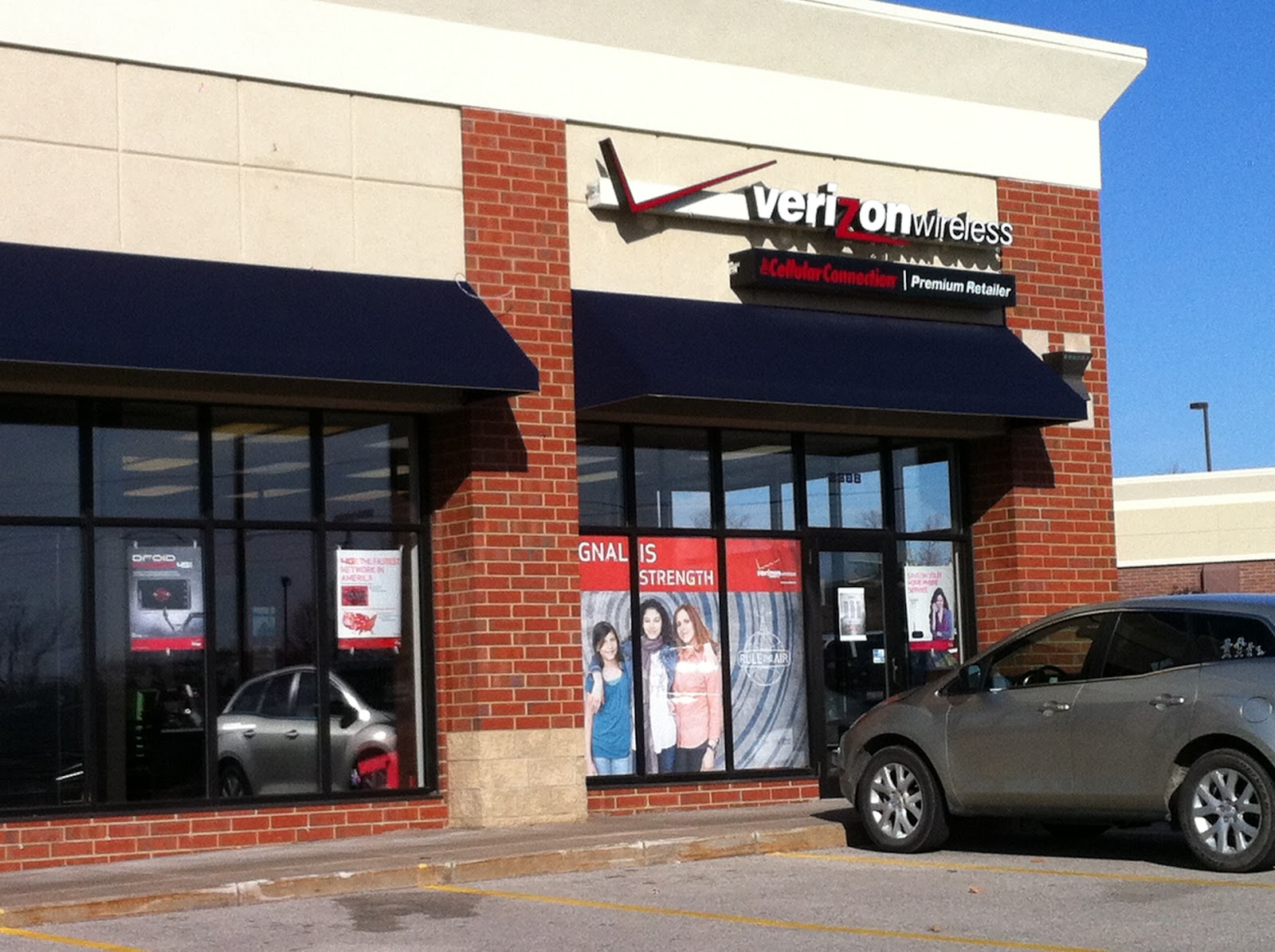 Reading about a product just isn’t the same as touching it, feeling it and of course, playing with it. So I headed to a local Verizon store to be able to check out the Motorola Xoom in person. 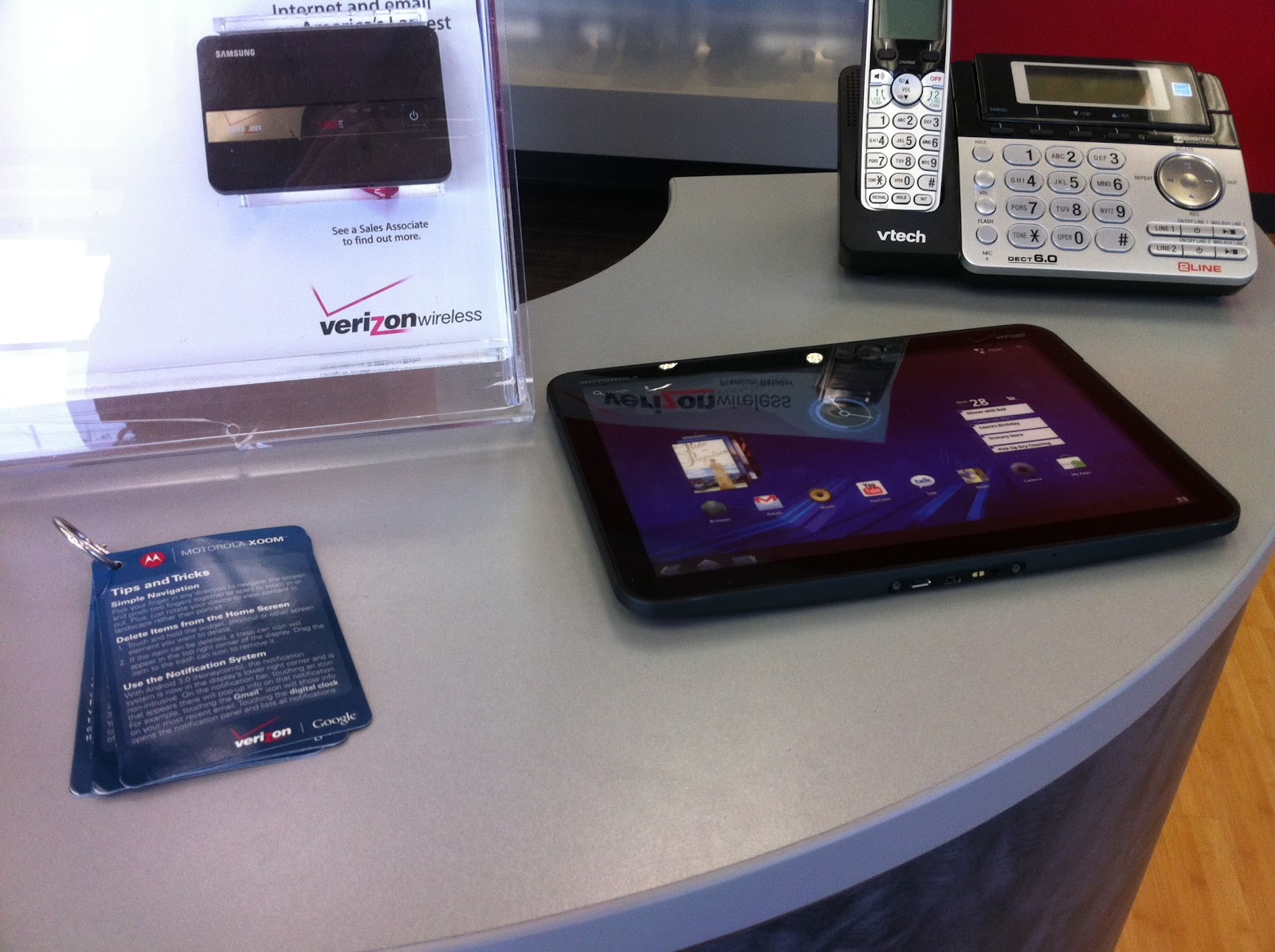 When I arrived, I noticed an advertisement on the door for the Droid RAZR that was launched at 11:11 am on 11/11/11. That was pretty much the extent of the Motorola advertising I saw. Fortunately, with only a few island displays, the Xoom was easy to spot. All four staff members were helping other customers so I decided to check it out the display on my own while I waited. The unit on display was a mock unit of about the same size and weight as the real thing. The dummy screen displayed what the typical home screen would look like and it was cool to see the ‘stack’ of books to look at. Next to the dummy unit was a flip chart telling all about the Motorola Xoom.  Not only did it have the basic details (like what I found on the website) but it also answered several FAQs. As someone who prefers to check out products on my own (at any store) before finding an employee to answer questions, this was a nice option. It allowed me to read about the product before I even wasted a staff member’s time.

When I was finally assisted, I introduced myself and explained why I was there. I wanted more details and to handle the Xoom in person. The first employee, Andy, asked if I preferred to see the actual Motorola Xoom instead of the dummy one then headed off to get it from the stockroom. Another employee, Allen, explained to me that they were one of the few stores to actually get a working model. Most stores only received the non-working display unit. 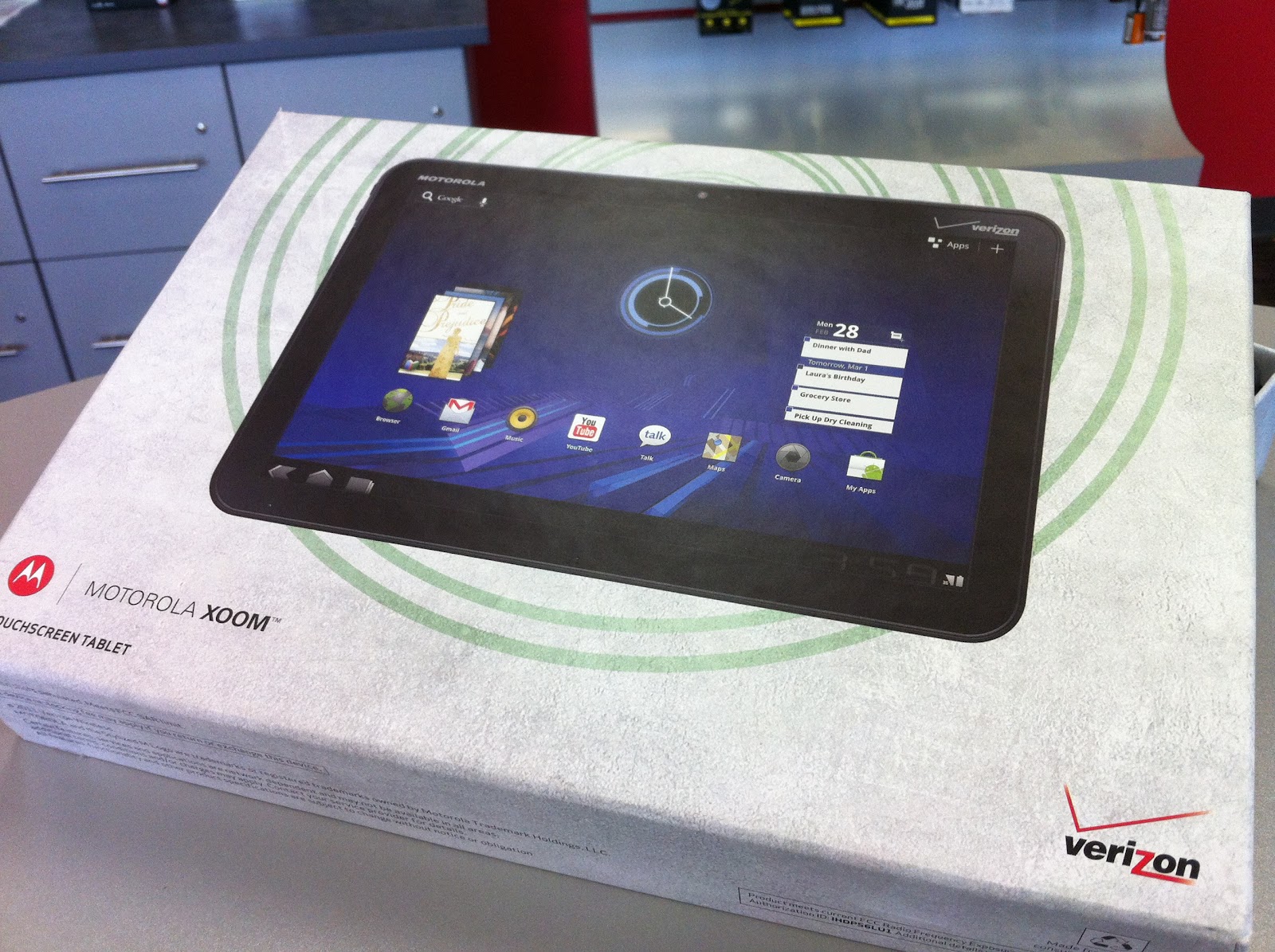 During the course of the conversations I had with the employees, they informed me that very few people walk in off the street asking about tablets.  They stock one of each brand and replenish it when they sell it.   For obvious reasons, they only carry units that have options for data plans.  In addition, the people who do purchase from them simply walk in already having researched the types and options at home.  Allen explained to me that even the sales representatives for the major companies don’t devote time to talking about the tablets.  The phones are their bread and butter and that’s what they focus on.  So when I was asking for detailed explanations of the product, they really weren’t able to tell me much.  Allen directed me to check out an independent website that compares phones and tablets but did have a few highlights to share.

The 4G LTE Xoom that they carry is, according to them, the best option. As Allen explained it, 4G LTE is the new global standard for data transmission, being adopted by many foreign countries. It runs like a laptop, 10 times faster than the leading selling tablet.  Andy stated that the unit is ideal for anyone with an Android phone because they run the same way and also noted the HDMI port as a key point for the Xoom allowing users to hook it up to their TV. We discussed how users can utilize the forward facing camera to chat via Skype or Google Talk to people on other tablets, computers or phones that run Skype and Google Talk. 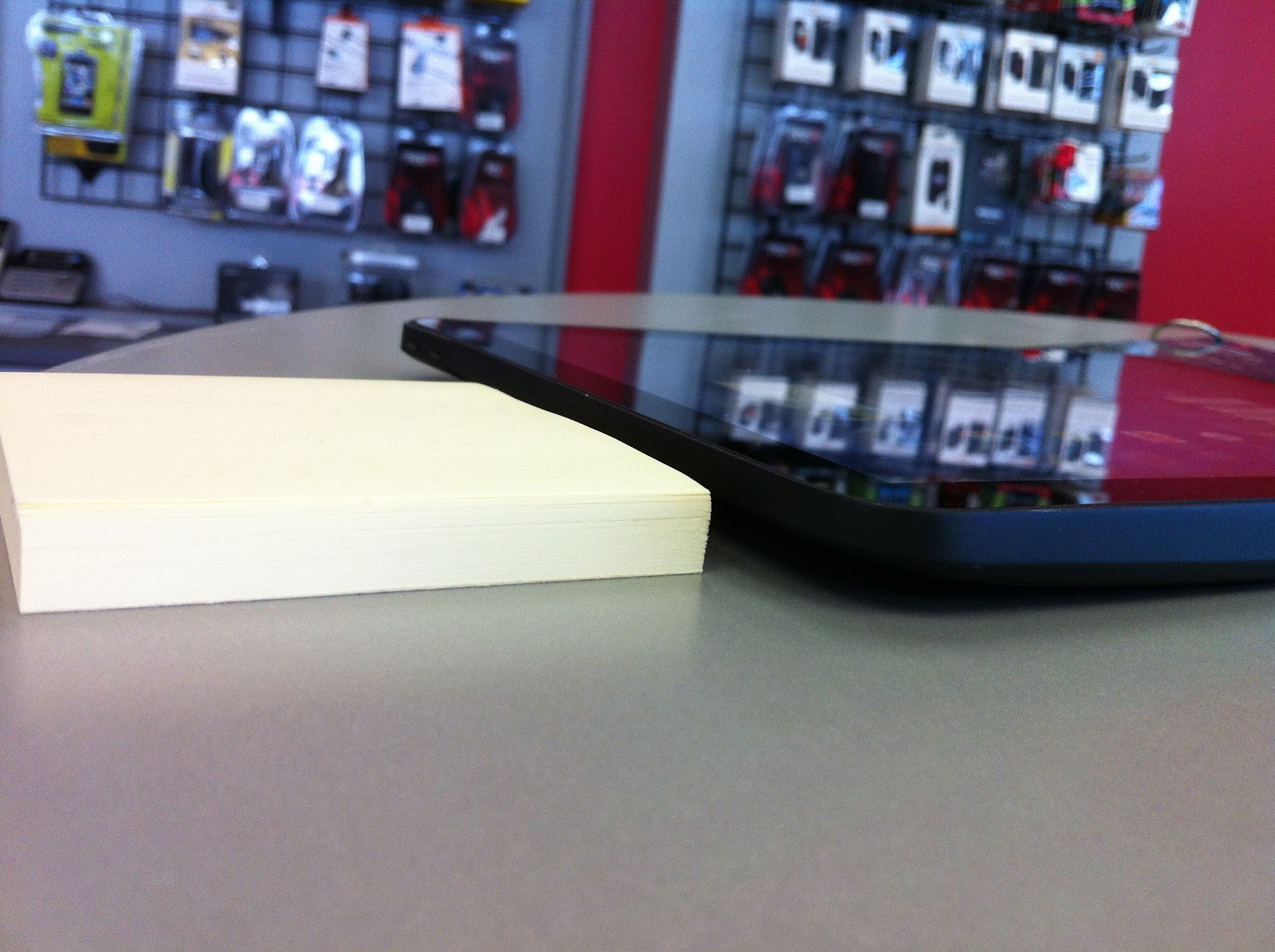 Unfortunately for me, the ‘working’ Xoom they had in stock wasn’t charged. They attempted to get it to charge while I was talking to them but it never worked. All my excitement for wanting to feel, touch and use the real thing went right out the window. At least the staff aided me in getting a few photographs to give some perspective on the size. The photo here shows how the Motorola Xoom compares to something most of us recognize – a pad of Post-It notes.

While I wasn’t able to use it and see how it worked, I did get a good feel for the unit as well as some useful information from the staff. I agree that most of the information I acquired was during my own personal research at home and not from what they provided at the store. They admitted that they don’t push the tablets because the reps don’t push them and when I asked for highlights of what they would say if someone came in asking, they didn’t have much to offer.

If you’re looking at getting a tablet for Christmas, I encourage you to research them before heading to the store. But I also think feeling and holding a unit is key. They’re an awesome addition to a family’s technology arsenal.