Skip to content
When my dad was in school, he had to walk to school barefoot.  In the snow.  Uphill.  Both ways.  Uh-huh.  He told me so and I’m not going to argue with my dad.  Things sure were different when my dad was young than when I was.

When I was in school, we used pencils and paper in math class.  Getting caught with a calculator was grounds for disciplinary action.  It was cheating.  I don’t think we were allowed to use a calculator until I took trigonometry or pre-calculus. 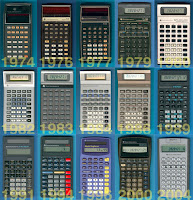 Actually, I specifically recall having to create a sin and cosine table on the back of my notebook that we were to reference prior to even thinking of touching the calculator.  THE calculator that was allowed was a Texas Instrument, TI-55III.  I think I still have it around here somewhere.  It’s the one labeled “1984” in the picture.  For my accounting classes, there was a different financial calculator that helped figure out future values or assisted in determining payment, interest rate, number of payments or whatever depending on what information we had and what we were missing.

Kids these days are not only allowed to have calculators, but they have really cool ones.  Don’t get me wrong, the TI that I used back in the 1980’s was great for its day, but this new line of units is just amazing. Either technology has come a long way or someone figured out how to inject steroids into these things.  Calculators are miniature super computers and some, like the Texas Instruments TI-nspire CAS, have corresponding software for use on a regular computer.  With the nspire, the software isn’t just for the student, there’s a teacher’s edition that allows the teacher to sync with the student’s TI-nspire and download questions the student may have, then resync at a later time after reviewing and answering them.  To boot, this particular calculator is approved for use on SAT, PSAT and AP tests.  When I took my ACTs, I remember being allowed extra paper for calculations… but we had to destroy it before leaving the test room.

Let me say, the calculator itself is just phenomenal.  As a former accountant, I had to be careful not to short it out with all my drool.  The times of needing two different calculators are gone (IE scientific versus financial) with the TI nspire wrapping it into one – with interchangeable faceplates.

As fate would have it, about the same time I found out about the nspire, a family friend was notified that she needed to purchase a special calculator for her son, Steve, a high school freshman.  He is required to have one for his geometry class.  In lieu of testing it myself, I opted to give it to Steve, someone who could take full advantage of its features – something I was far from doing considering my days of geometry and calc classes are long gone.  (Not that I’m complaining, of course.) 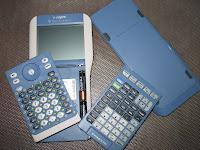 I talked to Steve after he had it for a few days and asked his initial reaction.  He said “It’s just like the (abc) one that I’ve used before so I was able to use it right away.”  When his mom forwarded his review to me, she confirmed that to be true.  “Steve picked it up and used it for his Geometry homework the first night that he received it without even looking at the instructions.”  I was pleasantly surprised to hear that!  She went on to say “Steve found it to be very easy to use. He didn’t need to check out the instructions too much. It was mostly hands on to figure out how to use it. I would not be able to do that being the technically challenged person that I am but Steve picked it up as if it were a video game controller. The only bad thing is that he hadn’t had the chance to use the alternate keypad.”

When he first saw it, he did comment about “Whoa, that’s huge!” but after toting it around and using it for a few days, he realized it just appears large and really isn’t that cumbersome.  Some of his highlights about the unit are (1) the screen is large making it easy to read, with excellent graphics like a handheld computer; (2) the keypad isn’t too crowded minimizing ‘fat finger’ mistakes; and (3) “It’s cool that you can keep notes on it and transfer the information to the computer.”  He had nothing negative to say about it.


His friends all thought it was awesome, too.  Some inquired where they could get one while others commented on how lucky he is to have an nspire… wishing they could. 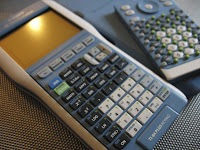 When Steve showed it to one of his teachers, his teacher commented that they had used something similar in prior years but nothing quite this advanced.  Steve’s mom said “His teacher was quick to take it and show other teachers but really didn’t let Steve know what was said.”   His teacher did ask if they could check out the teacher software “to see if it would benefit the class or assist in any way.”

The TI-nspire is an advanced calculator that aids in the learning process.  Steve said that he hasn’t encountered a problem that it couldn’t solve – while his mom said “It did help Steve to fully understand his work a little bit more.  He said that he had general understanding of the problem solving but it works it all out for you and makes it all easier.”

Texas Instruments was the leader in calculators when I was young (the Little Professor that was shaped like an owl), when I was in school (the ones I mentioned above) and it still is… I guess some things don’t change between generations.

Special thanks to Family Review Network and Texas Instruments for making this review possible!