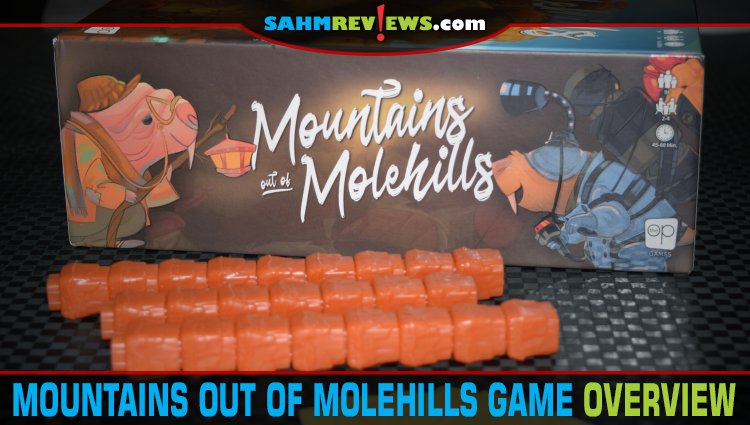 Mountains Out of Molehills Game Overview

It’s always funny to me when a board game reminds me of an instance from my childhood. We had a lot of land and my brothers and I were tasked with keeping it mowed. (I’m not complaining, our allowance factored it in.) One brother handled the edgework that could only be done with a weed eater. The other was in charge of the push mower and all the nooks and crannies that couldn’t be reached with the riding mower. That was my gig. I had the easiest of the jobs, but also had the most property to cover. It usually took me 3 or so hours to get my part done. Seeing Mountains Out of Molehills from The Op brought back memories of the critter issues we had on our rural property. While the problem we had involved ground squirrels instead of moles, the game reminded me of all the holes in the ground we had to deal with. My folks hated the holes, but I was always afraid the little creatures would pop their head out as I was mowing over one of their burrows. Thankfully, Mountains Out of Molehills isn’t that brutal.

Setup is pretty slick. Similar to boop. and Snail Sprint, the box is incorporated into the game. Up to four people can play, but the general setup is the same regardless of player count. The only difference is that the play area is reduced with fewer players. Start by building the mole world by adding frame pieces to the box bottom, placing the double-sided underground board on the lower half and the double-sided aboveground board on the top. Shuffle and deal out five movement cards per player into a shared tableau. Give each person a mole and associated pieces. The starting locations will vary based on the player count. The King of the Hill tokens are used to determine player order each round.

The object of Mountains Out of Molehills is to have earned the most points after six rounds of controlling molehills. Each round consists of three phases: (1) Card drafting, (2) Planning and movement and (3) Scoring. Drafting is simply the process of selecting movement cards from the grid. Starting with the player with the #1 King of the Hill token, each player takes turns selecting a movement card. There are eight different types that involve moving, turning, placing rocks and knocking over existing molehills.

During planning, organize the cards into a stack for how you’ll want your mole to move. The next part, movement, is the meat of the game. First and foremost, moles move in the direction they are facing. The nose knows the way. Whenever the mole moves into a new space, it pushes at the surface, indicated by placing one of that mole’s pieces onto the aboveground board. If there are already pieces in a stack there, the new pieces are added to the bottom. Proceeding in King of the Kill order, players reveal and resolve the top movement card in their deck. Unfortunately, you don’t know what the other moles are up to and some may end up in your way.

When you run into another mole, a rock or even the edge of the board, your forward movement stops. You’re still able to pivot if the movement card allows, but you won’t be pushing up any more dirt. Oh, and when a mountain reaches a specified height, it tips over and scatters the dirt onto the top of spaces in its path.

After all movement cards have been exhausted, scoring for the round begins. The goal is to control the molehills and this is determined from the moles’ points of view: looking up. Each mountain is controlled by the color on the bottom of the stack with points determined by the number of pieces in that mountain. When scoring for the round is completed, pieces remain on the board and the next round begins. The player with the most pieces on the top of the mountains will be the first to choose their King of the Hill token. That doesn’t mean they must select number 1! They may opt for the 4th one so they have the final movement of the next round. The process repeats for a total of six rounds and the player with the most points is declared the top tunneller.

Since the movement cards are ordered once each round to determine the mole’s movement, Mountains Out of Molehills can be used to introduce younger players to concept of programming. There are enough angles to take in general gameplay that is also a great game for strategic thinkers. It’s currently available direct from The Op, on Amazon and at local retail stores. As we head into summer game convention season, keep an eye on Facebook and Twitter for news about upcoming releases from The Op!

How do you feel about critters in your yard?