One of the interesting things about the game industry is that a vast majority of games are designed by individuals who aren’t employees of the company that initially publishes the game. In some cases, the product will later be republished by another company. The are a number of reasons this can happen and in most cases, the customer doesn’t even notice. Sadly, I have to admit that I’m guilty of this as well. When we were working on our Holiday Gift Guide, we included a game called Folded Wishes, a game about origami that we had seen at a prior summer game convention. To our surprise, it was released by CardLords and not by the same publisher who showed it off at the event. 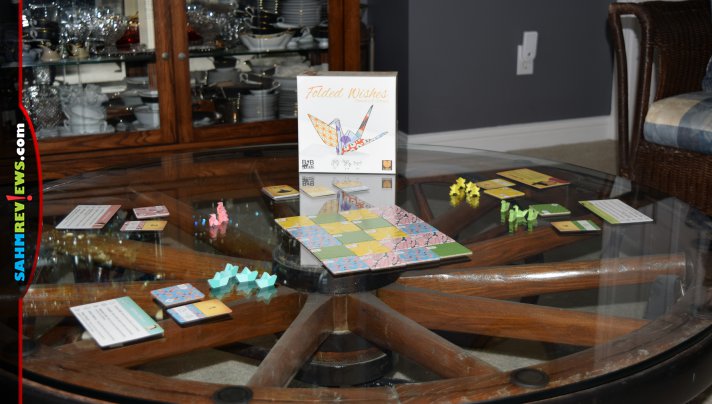 While Folded Wishes is origami-themed, it’s not like Fold-It where you’re literally folding something. If you want to actually create origami designs, maybe you should grab an origami craft kit. There are instructions in the game for you to create your own origami player pieces out of paper, but it comes with wood pawns in popular origami shapes. Set up the game by determining the number of players and selecting the associated player starting pattern tile, skill card, reference card and character pieces. Give the set labeled “1” to the first player, “2” to the person on their left and so on. Remaining pieces are returned to the box. Create a grid in the center of the table determined by the number of players. Shuffle the journeyman and master skill cards then stack them to create the skill deck. Reveal the top two as community goals.

The goal of Folded Wishes is to be the first player to align their four pieces on the board in any direction. Each turn consists of five steps: Place, Fold, Push, Take and Learn. You begin by placing your pattern tile along any row or column then place an animal on it if you have one that is not already on the grid. You’ll proceed to perform the action that is designated on the tile which range from moving one of your own animals to an empty adjacent tile to switching the location of two tiles in the grid. You may also optionally take advantage of any other skills you have that match the tile you placed. This is referred to as the fold.

After you’ve taken your fold actions, push the pattern tile into the grid and displace the tile on the opposite side. If there was an animal on the displaced tile, move it to any empty adjacent tile. If you are unable then return it to its owner. Take the tile you pushed and it will be your pattern tile for the next round. 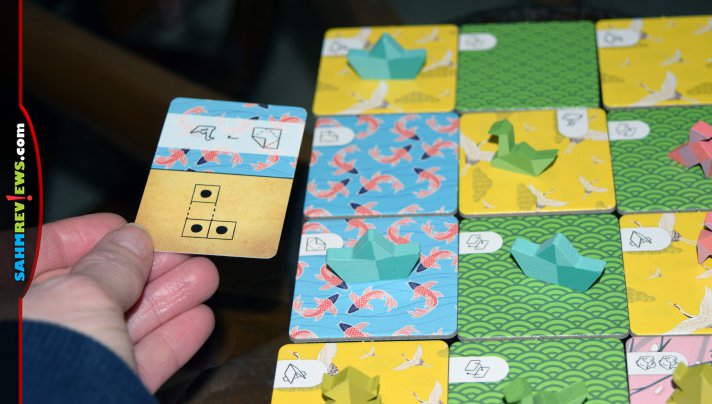 Throughout the game, you’ll learn new skills which will allow you to take bonus actions during the fold step of your turn. These are acquired when the animals you have on the board match one of the community goals. These skills, as well as the one you received with your starting tile, allow you to manipulate the fold actions or take additional ones.

Players continue taking turns until one has accomplished the ultimate goal of four in a row. At that time, the game ends immediately. Folded Wishes is essentially an abstract strategy game with the origami theme pasted on. You don’t need to know how to fold paper into animals or pieces of art in order to play this game. All you need to do is figure out how to line up your four pieces (which isn’t as easy as you might think)! If you want to unfold this kind of fun at your game night, check with your local game store, purchase direct from CardLords or pick up a copy of Folded Wishes on Amazon. If you’re wondering what other projects CardLords is crafting, check them out on Facebook or Twitter.

What origami designs do you know how to make?