I’ve probably mentioned it before, but it bears repeating. I’m not very good at trivia games. I used to think I was until we participated in a few trivia nights at a local rec center and I realized how poorly I did compared with the regulars. Sure, there was maybe one subject I could do well at, but the other nine had me relying on teammates to make an educated guess.

Same goes for trivia games. Not only am I usually on the losing end of the score sheet, these types of games tend to suffer from the inability to play them with opponents of wide age ranges. Our kids don’t have near the life experiences as we do, and we don’t have as many as our parents. For the most part, trivia games are best left to players who are of a similar age, background and skill.

We’ve come across a few games that try to level the playing field in different ways. Terra by Bezier Games allows your answers to come close to score. You Must Be an Idiot by R&R Games has a unique feature in that sometimes you’re asked to answer the questions incorrectly! And Timeline Challenge by Asmodee gives you a number of different ways to answer the question correctly – and most simply have you putting the card within a range of possible years.

We’ve recently come across a new (to us) company that has put their own twist on trivia games. The first two games we’ve tried from Gray Matters Games are similar in style to each other but are different enough that you’ll need to decide which works best for your family (maybe both!). Let’s take a quick look at The Game of Wolf and You Bet-Cha!

The Game of Wolf

Inside the box for The Game of Wolf are 250 question cards, a score board, two answer boards and three dry erase markers. Supporting up to a dozen players (with a minimum of four), you can expect a full game to last just over a half hour. When playing with larger numbers, players will pair up into teams to make scoring less complicated. 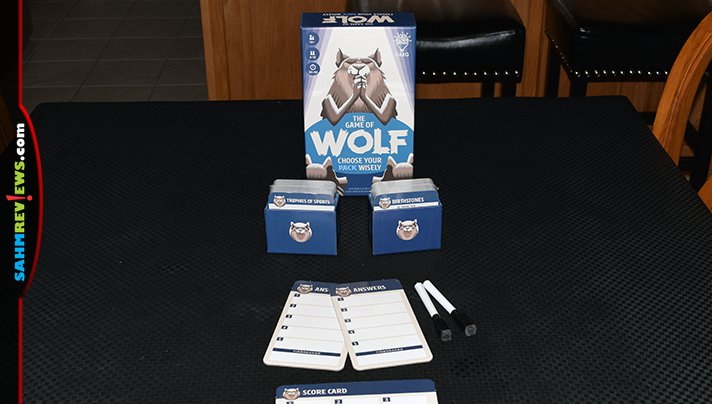 The Game of Wolf is played over three rounds, with each round consisting of a turn hosted by the active player (or team) and rotating clockwise around the table. The active player is referred to as “The Wolf” and the person whose birthday is coming up next gets to be The Wolf first. 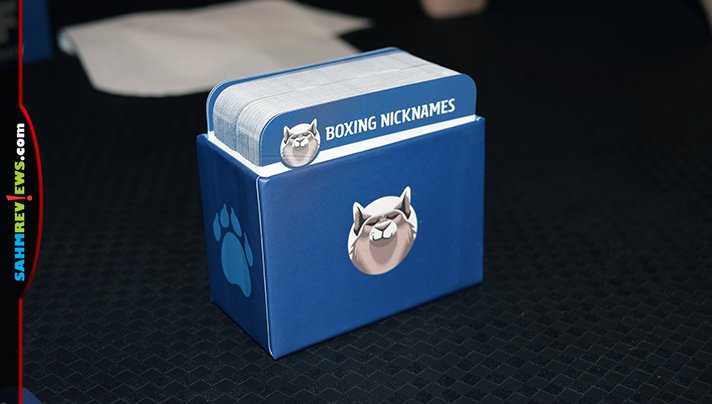 The player directly to the left of The Wolf selects a question card and reads only the subject aloud to everyone (the top of the card). At this point The Wolf must decide how well they know the subject and whether or not they want to team up with another person or persons/team (depending upon the number of players) that they believe knows the subject matter better. If they elect to go solo, they become a Lone Wolf and will score more points at the end of the turn if they are successful. Choosing teammates is a safer choice, since two heads are better than one, but also comes with points being split. 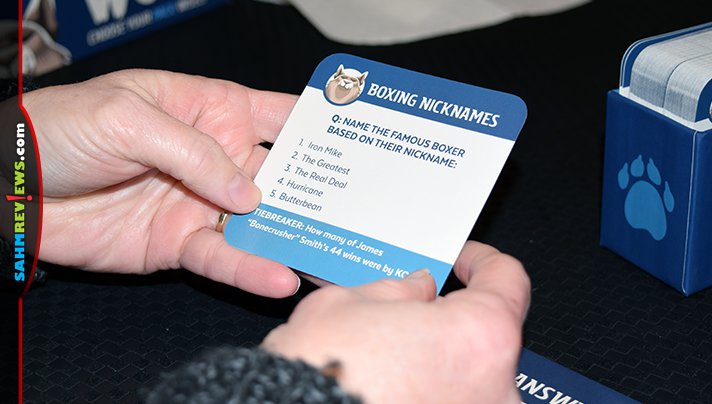 Once The Wolf has made their choice, the five questions and tiebreaker questions (below the subject) are read to all players. Both sides work to write down the answers to each one and a number in response to the final tiebreaker query on their answer boards.

When everyone is finished with their answers, the reader reveals the correct answers to everyone. The team or Lone Wolf with the most correct answers wins the points for that turn, and if tied, the side with an answer closest to the correct number for the tiebreaker question wins. Points are awarded depending on the type of winning team (Lone Wolf or team) and scale up each round. The individual player (or team, if playing with more than six) with the highest overall total after three rounds is the winner of The Game of Wolf! 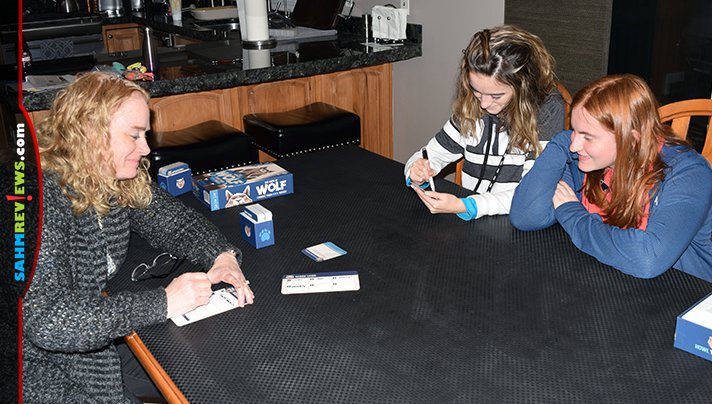 You can find Gray Matters Games’ The Game of Wolf on Amazon or at your favorite local game store for under $25!

While you had the luxury of choosing a smarter opponent as a teammate in The Game of Wolf, in You Bet’Cha you’re on your own. Well, mostly. This one is designed for a smaller group of players (2-6) and still rings in at about 30 minutes to play. Instead of answering five questions about a subject, you’ll be solving one with multiple answers – and as fast as you can! 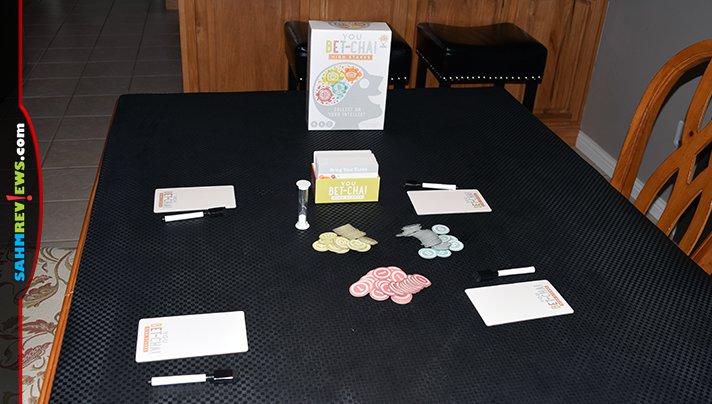 In this box are 150 subject cards, a sand timer, 100 poker chips in three denominations, six answer boards and six dry erase markers. Each player begins the game with $47 worth of chips along with an answer board and marker. One player is designated as the timekeeper and another as the banker to handle the remaining poker chips. Birthday-person is again awarded first player status! 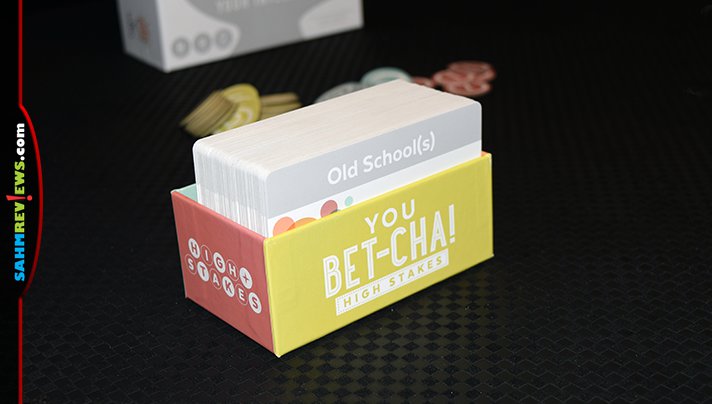 At the top of each card is a category, followed by a subject directly beneath it. The active player takes a card and reads aloud the category, but keeps the information about the subject to themselves. All players put $1 into the pot as an ante and the active player may then submit a bid, poker-style, correlating to how well they think they know the subject. The other players, who only know the category at this point, must either fold, call or raise the high bid. Once all players have either folded or called, the subject is revealed and read aloud to all players. 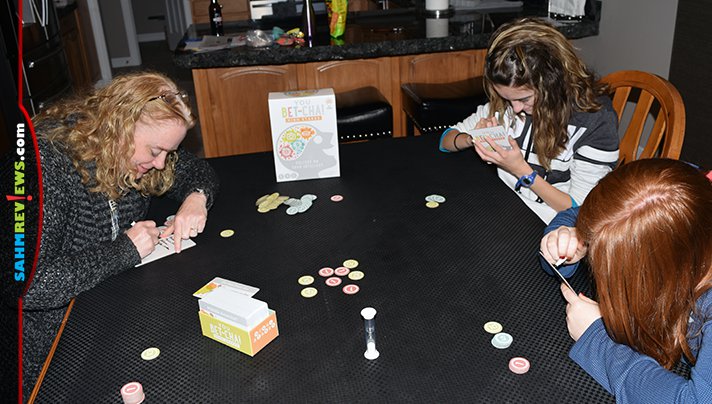 At the same time the 1-minute timer is turned over and everyone who has not folded rushes to write down as many answers to the category they can think of. There are no penalties for wrong answers! Players who folded in the first round of betting may now elect to place a side bet of $5 on anyone who is still in the hand.

Once the timer runs out, players have another opportunity at bidding, starting with the active player. This is one area where we couldn’t find clarification as to what happens when someone doesn’t have enough money to continue to bid. The rules state you’re out of the game when you’re out of money, but we assume that means at the end of a turn. Otherwise anyone who is slightly ahead can just bet all their money and force everyone else out! We elected to play by traditional poker rules where we kept track of a split pot. A messy solution, but it worked. 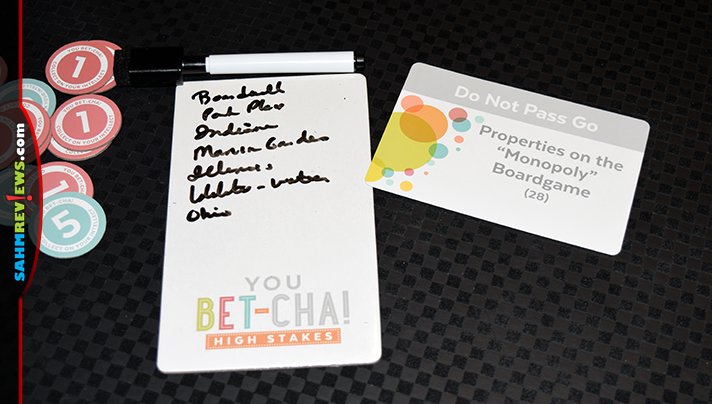 Answers are checked against the back of the card and the player with the most correct wins the pot. If tied, players split the pot with any extra going back to the bank. Anyone who bid on any of the winning players in a side bet win $5 direct from the bank! The player with the most money after seven full rounds of play is the overall winner of You Bet’Cha!

As with their previous title, you can find copies of Gray Matters Games’ You Bet’Cha on Amazon or at a local board game store!

These are but two of the four titles Gray Matters Games currently has in their lineup. Check out the others over on their website! They’re pretty active at Chicago-area Protospiel events, so I wouldn’t be surprised to see a number of other titles making their way to retails shelves very soon! Follow Gray Matters Games on Instagram or Facebook to find out what games will be made and when they’ll be available!