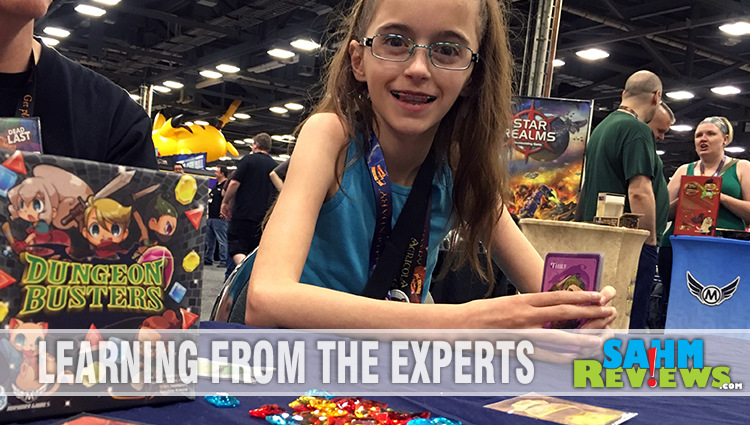 We’ve long been proponents of upgrading your games. Whether by replacing the inferior paper money with theme-appropriate bills or pimping out your meeples with custom versions, anything you can do to make the game your own is certain to increase your family’s appreciation and enjoyment.

One of the easiest upgrades to implement is to find a 3D replacement for any printed cardboard pieces. Hobby Lobby is a great resource for all types of items that can be used in board games – a common favorite is to buy their generic blue buttons and swap them for the cardboard ones in Patchwork. While some may find this sacrilegious, we find it exciting when game publishers not only embrace the idea but offer their own line of pre-approved upgraded game bits! 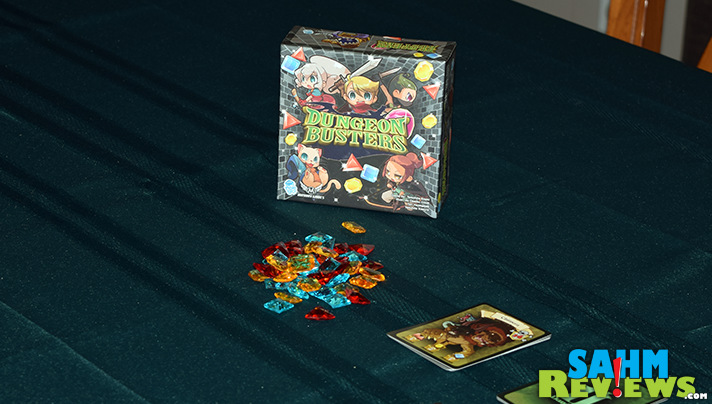 Case in point is Mayday Games‘ Dungeon Busters. As with many games, concessions are made in order to keep the retail price at a minimum. Dungeon Busters is regularly available in the $14-$16 range and includes a custom deck of cards and a number of the previously-mentioned cardboard pieces used as treasures. This is certainly a game screaming for an upgrade! But first, a little about how Dungeon Busters is played. 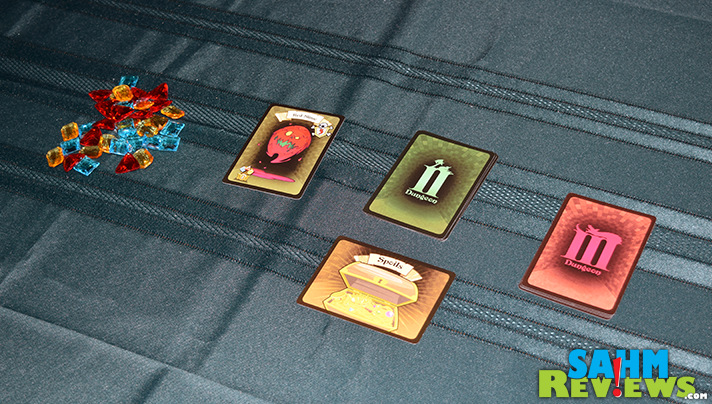 Dungeon Busters is a semi-cooperative game where up to five players are venturing into an imaginary dungeon looking for treasure. Like any good dungeon, the gems are guarded by a number of different monsters, becoming more and more difficult the further you delve down. Your team’s goal is to defeat them and collect their treasures. 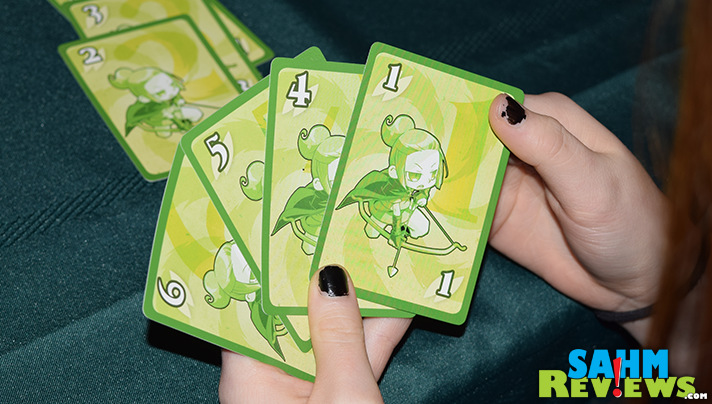 Each player receives a hand of cards in their player color and three decks of dungeon cards are shuffled and laid in the center of the play area. Beginning with dungeon #1, the top card is turned over, revealing the first monster to fight and listing the treasure he guards. Each player secretly chooses one of their cards and places it face down in front of them. This card represents the attack power of your hero for that fight. Since you are working as a team, you are free to discuss which cards should be played by whom, but any agreements are not binding. So why wouldn’t you always be a team member? While this is semi-cooperative, there will be an overall winner determined at the end, and you want to be that person. 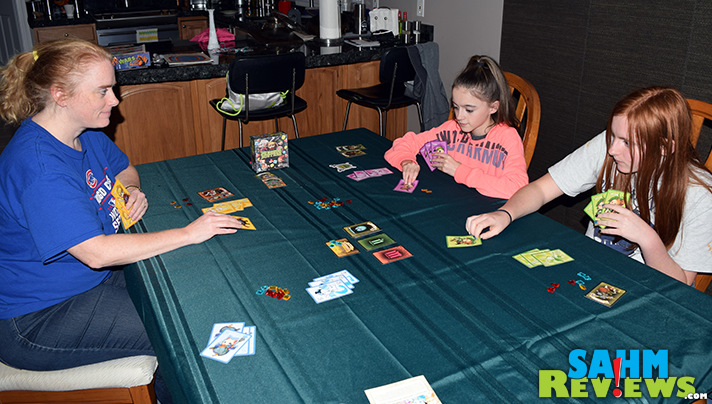 Once everyone has chosen their card for that fight, all are turned over and the cards are compared. If anyone played a card which matches another hero, those players are out of the fight. Only heroes with unique numbers are still available to battle, and those numbers are totaled to see if it is equal or greater than the strength of the foe. If not, the player who played the lowest-numbered card loses all of their gems in the color they own most and places them on the “Spoils” card. 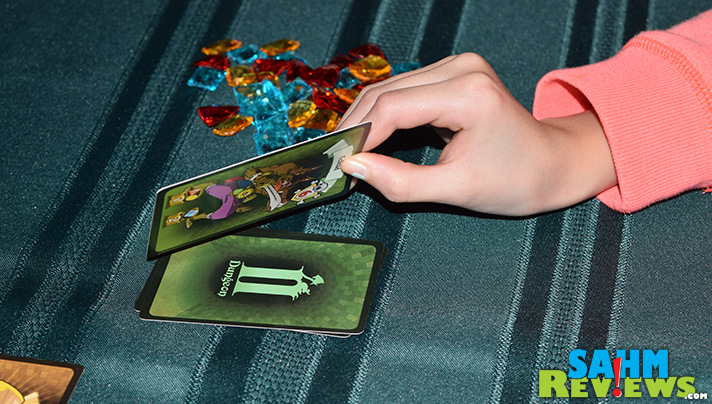 If the monster is vanquished, then it becomes time to split the treasure. Again, any players who matched another do not get to participate in the awarding of gems. The person with the lowest numbered card receives the treasure dictated by the #1 chest on the monster’s card. Next gets #2 and so on. If there are more heroes than chests then someone will not be receiving any gems from the chests! The person who played the highest numbered card does receive the monster card as a trophy (and will be used as a tie breaker at the end of the game).

After the battle, all contributing players get any gems on the “Spoils” card, starting with the lowest number played and continuing until the card is empty. If you haven’t figured it out by now, matching another player’s card is very bad for your game – you are literally left out of all of the gem collection! But strategically there may be times you want to match. Maybe you want to slow down whomever is in the lead. Maybe you want to lose a fight on purpose to force someone to discard their most plentiful gems. It’s a risky move, but one that may be necessary to come out ahead.

Once all of the cards from Dungeon #1 have been resolved, everyone gets all their cards back into their hand and moves on to Dungeon #2. Then Dungeon #3. After the final monster in Dungeon #3 is resolved, players add up their total scores. One point for each gem collected, 3 points for each complete set (one of each of the three colors) and 3 points for having the most of a color (if there are any ties for most, no one gets anything). Most total points wins Dungeon Busters, and if tied, the player with the most collected monster cards is the winner! 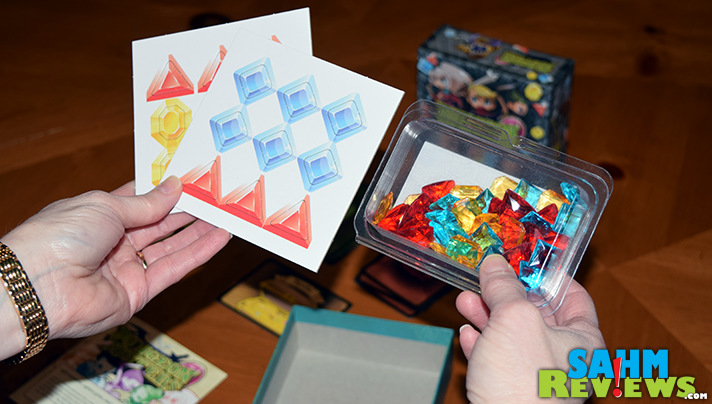 And while Dungeon Busters is a lot of fun, especially with people you have trust issues with, collecting pieces of cardboard just wasn’t fulfilling enough. Fortunately Mayday Games felt this way too and offers a very special Gemstone Upgrade Kit. This kit includes 45 plastic gemstones (15 of each color) that still fit into the original box! Getting to grab a lima bean-sized gem instead of a flat piece of board is so much more gratifying. It’s a must-have if you own (or are getting ready to buy) Dungeon Busters!

Find your copy on Amazon for around $16 or direct from Mayday Games on their website. The upgrade gems will set you back another $8 (Amazon, direct), but in our opinion is well worth the expense. You might be able to find something at your local craft store too, so keep an eye out there! As always, watch Mayday’s Facebook and Twitter timelines for new product and expansion announcements and check out their line of card sleeves! We’ll be telling you more about them in the very near future!

Do you like upgrading your games? Which ones have you upgraded?