Home / Giveaway / You Can Drink That Now 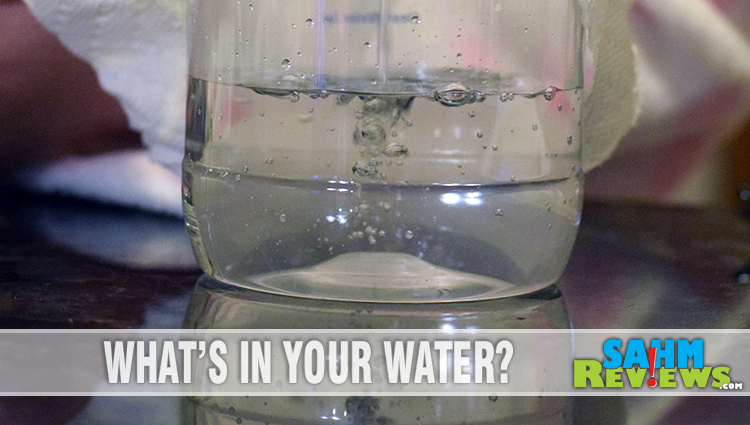 You Can Drink That Now

About a month ago, I watched Wild, the movie starring Reese Witherspoon. Based on the autobiography by Cheryl Strayed, it chronicles her hike of more than a thousand miles on the Pacific Crest Trail. I’m currently in the middle of reading “Between a Rock and a Hard Place” detailing the outdoor life and adventures of Aron Ralston that led to him getting his hand caught under a boulder while exploring a remote crevice in Utah. One thing common to both these individuals is that they were forced to live and endure the things that nature threw at them throughout their journeys. Dealing with the elements, managing shelter, eating rations, melting snow for drinking water or using a purifying kit to clean water found in some random area of the wilderness were things they had to deal with. The other similarity is they were each in these situations because of the personal choices that they made.

We’re fortunate that we can go about our lives making these kinds of life-altering decisions while we take simple things like clean water for granted. That isn’t the case all around the world. For nearly 1 billion people around the world, not only is there not readily available drinking water, but the water that is available is dirty or contaminated, containing bacteria, viruses and parasites. According to a recent survey conducted by P&G, 2/3 of U.S. moms underestimate the number of people affected by the clean drinking water program. 10% of the world’s population lacks access to clean drinking water, and 2/3 of moms think it affects less than 10% of the population. 80% of moms underestimate how many hours women in the developing world spend collecting clean water. It averages 14 hours per week! Can you even imagine? We’re so used to walking up to a refrigerator to get water and often consider getting water from the tap the less desirable option.

Procter and Gamble has long been about the Power of Clean and you can probably find something in your home from one of their signature cleaning brands: Tide, Mr. Clean, Dawn, Cascade and Crest. For more than 10 years, P&G’s non-profit Children’s Safe Drinking Water Program has been working to help provide clean drinking water to children and families around the world. How are they doing this? They utilized their Power of Clean knowledge base to create P&G Purifier of Water packets.

The process of getting clean water is simple. If you’re a fan of science projects you may even consider it fun. However, it isn’t a game. It isn’t a science project. It isn’t meant to be fun. It’s a necessity and for many individuals around the world, the difference between life and death.

As we have told you before, Miss K is a compassionate and caring child as well as quite intelligent. I thought this would be a perfect project to have her assist with. Not only would she appreciate the lab work, but she would learn more about a worthwhile environmental and humanitarian initiative. 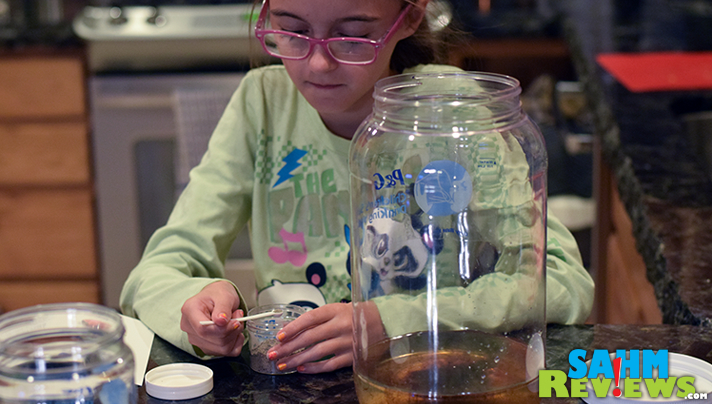 We utilized a demonstration kit to simulate what it is like to have to deal with unsanitary water. We began by creating dirty water. We literally only added a tiny bit of silt and dirt to a container of water and were surprised by how filthy it was when stirred. Miss K looked at it and said “I’m not drinking THAT!” I explained that some people don’t have a choice because that’s all they have access to. I proceeded to explain that the process we were about to go through is what many people around the world need to do whenever they want clean water. 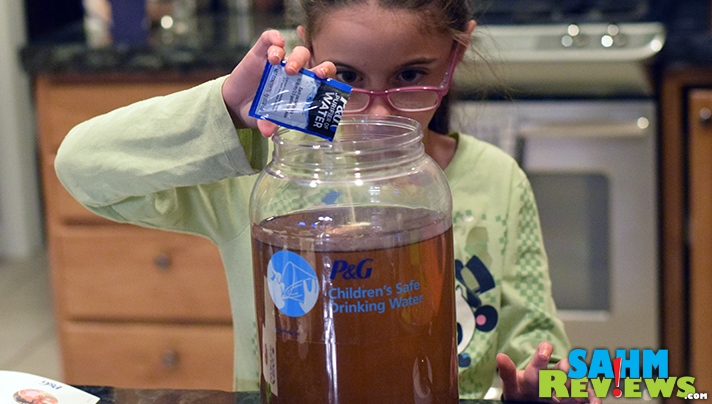 At this point, we’re at the same stage as the individuals without access to clean water. We proceeded to add the “P&G Purifier of Water” packet to the dirty water and stirred as instructed. This wasn’t an easy add a dash and be done, it required a solid 5 minutes of stirring to activate the process.

The anguish on Miss K’s face as she stirred and stirred gave me an even stronger appreciation for what these individuals must endure to obtain clean water. I ended up taking over the stirring and felt the strain on my arm within a minute. 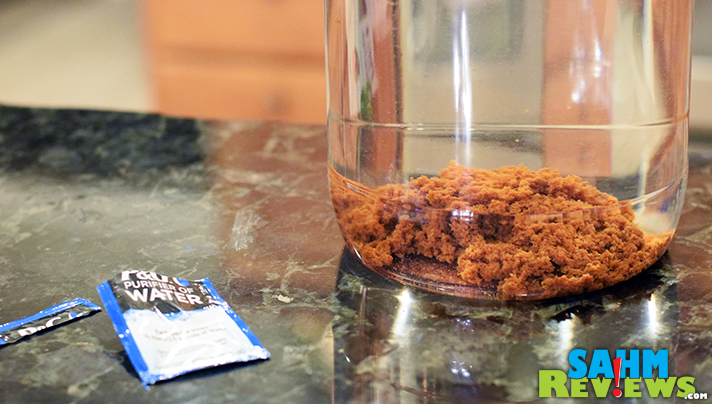 As the 5 minutes ticked along, we would see the dirt gathering into clumps. Now came the next phase: waiting. For the next 5 minutes, we watched as the clumps settled to the bottom. Tired from the stirring, I decided to get myself a glass of water from the tap. Oh, how I appreciated that more than ever before. 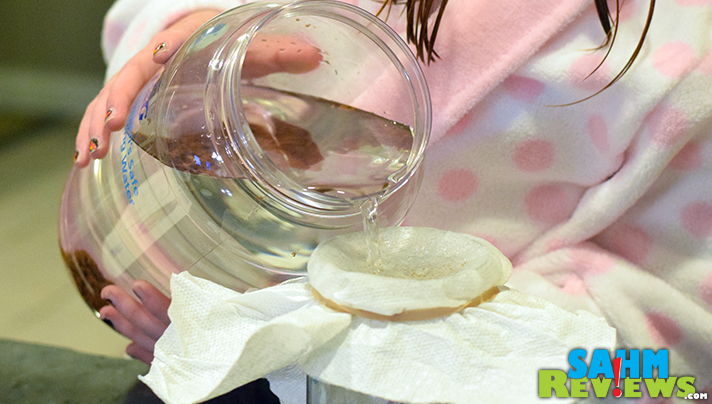 The process wasn’t complete. With the gunk (no, that’s not the professional term) settled to the bottom, we needed to strain the water into a clean jar covered with a paper towel and secured with a rubber band. The paper towel filtered out the brown floc (yes, that’s the official name of it) allowing cleaner water to pass through. Yet there was more waiting to come. 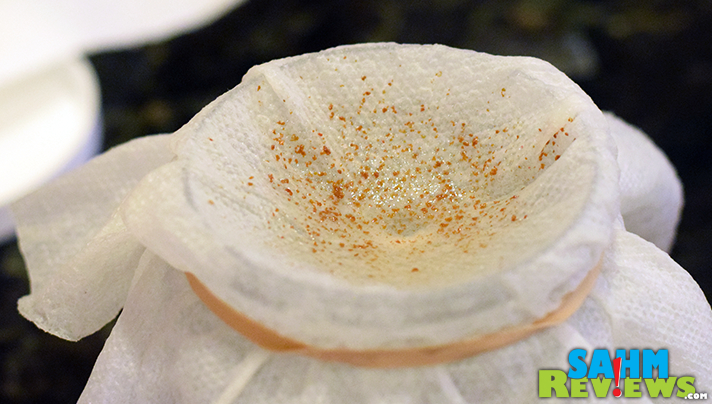 Miss K was amazed at how clean it looked compared to where she started. After all that, we still weren’t done. The strained water needed to rest for another 20 minutes to allow the chlorine disinfectant to kill any remaining bacteria and viruses.

And then there was clean water! If you appreciate your drinking water a little more than before, consider making a donation to provide clean water to others. At a cost of 10¢ per packet, a donation of $7.50 provides water to a child for one year. $30 provides water for a family for one year. You can learn more about the process or make a donation by visiting P&G’s Children’s Safe Drinking Water website. You can also follow along with them on Facebook and Twitter. We’re pleased to share that we are offering a giveaway of a P&G gift basket which includes up to $50 in P&G Power of Clean products along with a donation of $30 in the winner’s name. Grab a glass of water and take a minute to enter the contest.


No purchase necessary. Void where prohibited. Open to legal residents of US & DC who are 18 years of age or older. Giveaway starts 10/27/2015 and ends 11/10/2015. Sponsored by The Motherhood in partnership with Procter and Gamble. For the full list of rules, click here.

57 comments on «You Can Drink That Now»