Like most of you, when we were growing up, one of our family’s staple games to pull out on game night was Yahtzee. We loved it so much we eventually got a copy of Triple Yahtzee which added three scoring columns, requiring you to choose when to take the higher multiplier and when to throw something into the single column hoping for a better result later. This triple version was my favorite…until we ran out of scorecards. Remember, this was back in the days before laser printers and copy machines. Replacement pads were almost as expensive as the full game!

But this week we found a new version of that old classic at our local Goodwill – Yahtzee Free for All. When I picked it up at the store and saw that it included both cards and a whopping 30 dice, I knew the $1.88 price tag was well worth it. 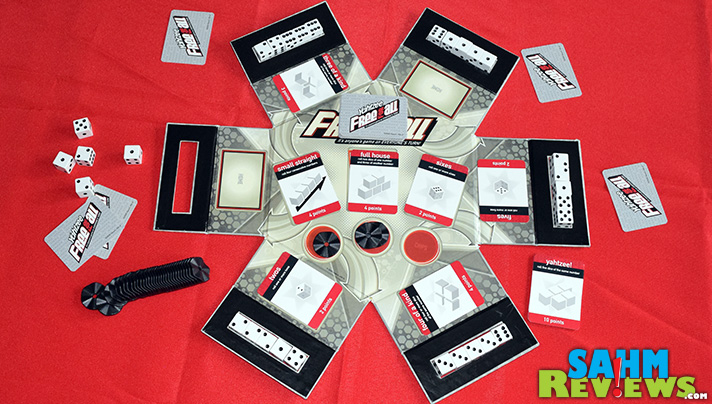 Yahtzee Free for All supports up to six players and is rated for ages 8 and up. I can see it being played by children much younger as long as there is an adult/teen available to explain the rules. And the rules really aren’t that complex, especially if you’ve played the classic version of Yahtzee.

There is an included deck of cards that have different challenges on them, exactly like the scorepads of old. You’re trying for small straights, large straight, full houses, matching dice and Yahtzees. But instead of having to complete one of each on your scoresheet, you are trying to collect one of the three overturned cards in the center of the board.

On your turn you have three rolls (also just like in the classic game) and you can either take one of the three center cards or steal one from in front of another player if your result is better! If they have a 1-2-3-4 small straight with an extra two, and you roll a 1-2-3-4 with a six, your roll totals more and is considered better. You get to take their previously-captured card and place it in front of you. 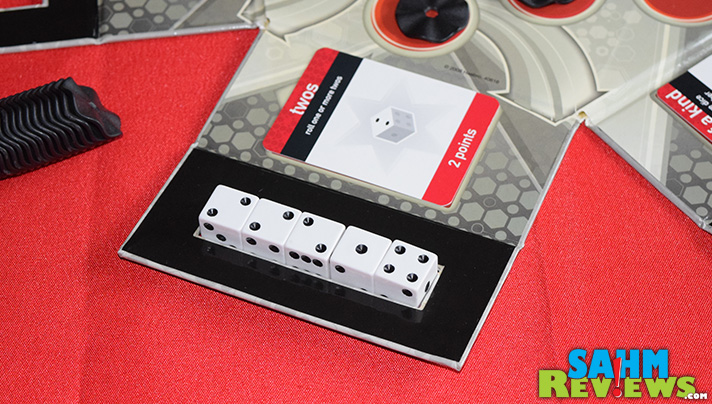 When your turn comes around again, if you still have your card you now capture it by turning it upside down and start rolling in an attempt to get another card. Each one of the cards has a point value on it that will be totaled at the end of the game to determine the winner.

If your turn goes by without you taking one of the center cards (either by failing to roll anything good at all or by capturing an opponent’s card), then you add plastic chips underneath each of the three cards on the board. This makes taking that card worth an additional point (or more if it is out there longer). These chips cannot be stolen – they are yours to tally at the end. 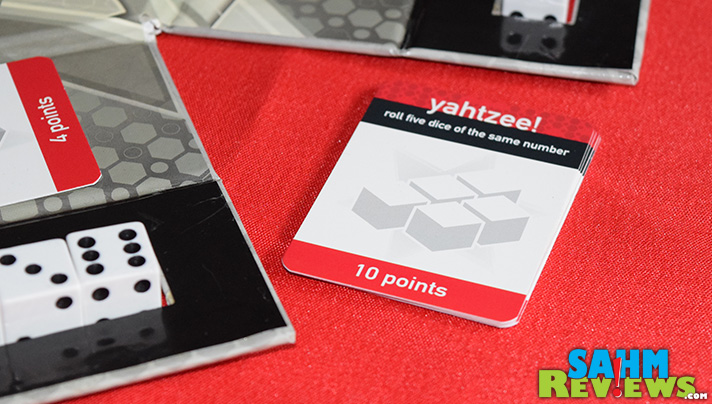 Additionally, there is a separate pile of six Yahtzee cards for whenever you are lucky enough to roll one. When you do, you get to claim one of those (which are much harder to steal in just one round), but you still put chips on the remaining three cards. 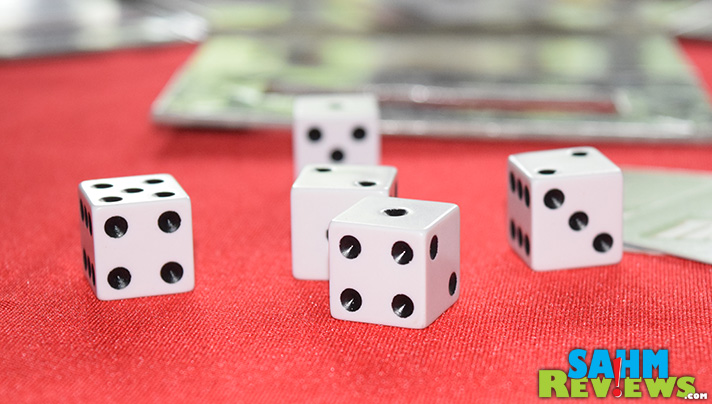 Players take turns in order until there are no cards left in the draw pile or you have run out of chips in the bank. Everyone totals up their chips and cards and the highest total is declared the winner.

I have to admit, this new take on classic Yahtzee is quite fun – probably even more-so than my previous favorite, Triple Yahtzee. The ability to steal from other players makes this a more integrated experience than just rolling and hoping for good results. There were many times we had to decide between stealing from an opponents (thus prohibiting them from getting points that round) or taking a card from the center with a few extra chips on it.

Yahtzee Free for All will have a permanent space on our game shelf from here on out. You can find a copy for yourself on Amazon or at your local mass-market retail store for well under $20.

What’s your favorite version of Yahtzee?

24 thoughts on “Thrift Treasure: Yahtzee Free for All”