One of the greatest joys of being a parent is watching your child’s intelligence build. Whether it is the math problem they need help with or tougher questions about current news, there eventually comes a day when you know they’re your equal. Tonight while playing our newest game, Plunder, I realized that day was here.

Plunder by R&R Games is a new type of game for us that requires deductive reasoning in order to be successful. It is probably best compared to a game of Sudoku mixed with Clue. We weren’t sure if the girls would be up to the challenge of figuring out whose treasure was where – we couldn’t have been more wrong. 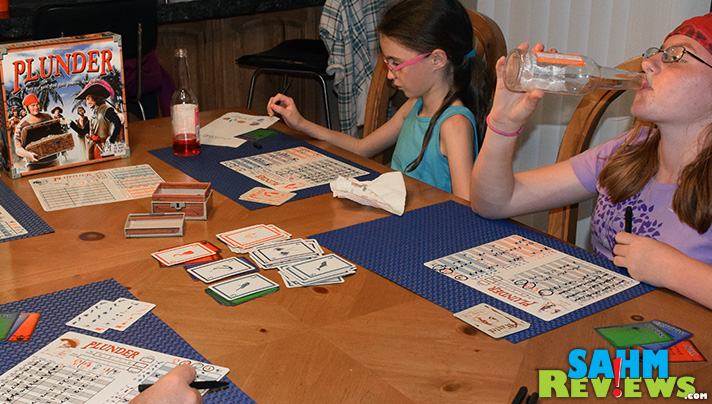 Each player takes on the role of a specific pirate who has buried their treasure and is now bragging about it in a local pub. Every pirate is listening in for clues as to where you’ve stashed your booty so they can send their crew to retrieve it while you are otherwise occupied with your rum. 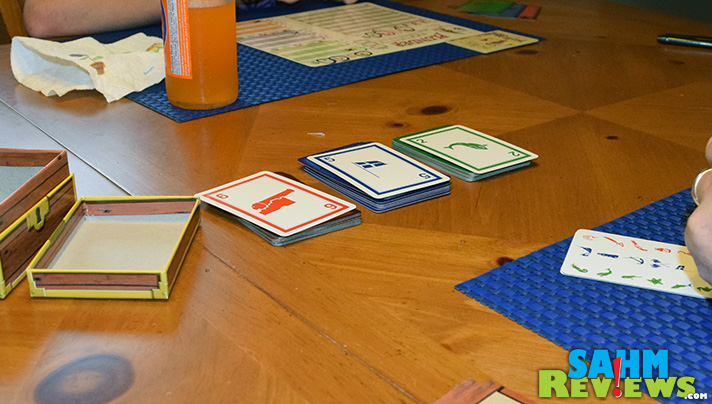 Everyone is dealt three cards that establishes the location of your treasure. Obviously this is private information and isn’t to be shown to anyone else. There is only one of each location card, so you already know where the other pirates’ treasure isn’t (it can’t be where yours is).

During the next 15 rounds (days) three cards are turned up and each pirate (whose turn it isn’t) exclaims “Aye” or “Nay’. This means that either at least one of the cards matches their cards (“Aye”) or none match at all (“Nay”). Using this information you mark the results with included dry erase markers on your tally board. Each round yields additional information about the whereabouts of your opponents’ stash. 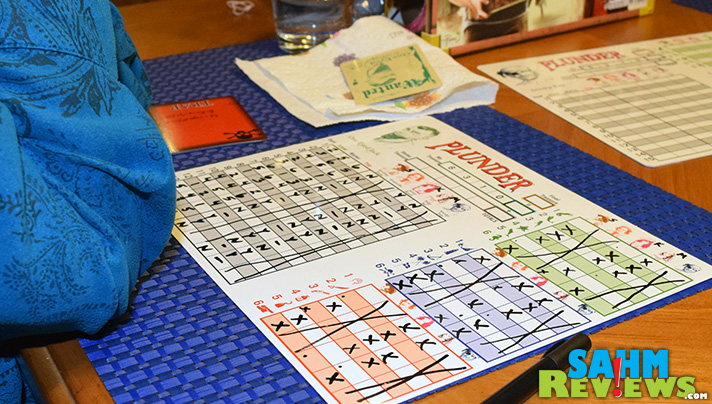 When you think you know the location of a treasure, you fill out one of your crew cards with your answer and place it in the community treasure chest. You can fill one out at any time during the game, but once it is in the chest it cannot be changed. You are given crew cards equal to the number of players, so in essence you have once extra card for mistakes/guesses. 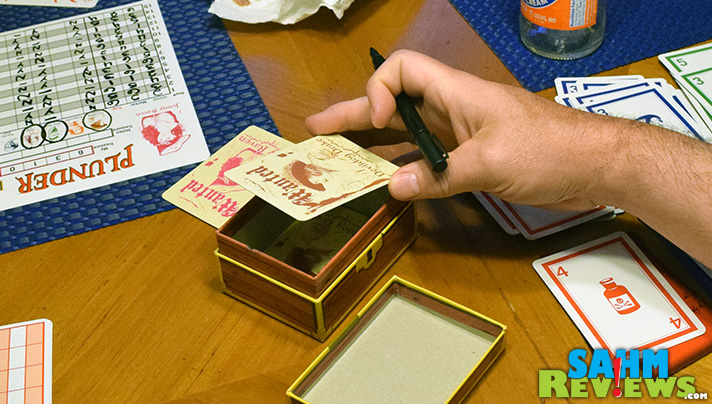 After all crew cards have been submitted (or 15 days have passed), the game ends and it is time to see who discovered the treasures correctly. Every pirate begins with a treasure worth 6 points. The first pirate to discover it ‘steals’ three of those points and adds it to their total. The next pirate steals 2 points – the third takes the last point, leaving you without any treasure at all.

Once all the crew cards have been tallied, the pirate with the most points wins the game. Any ties are broken by whichever pirate was the first to submit a correct treasure location! 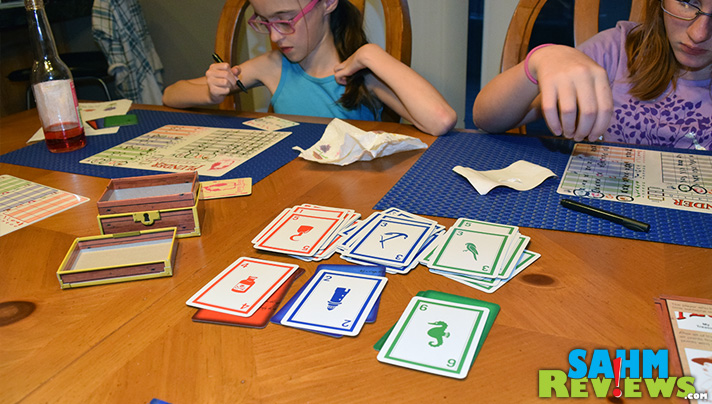 Plunder surprised us as a game that did require a decent amount of deductive reasoning. It is rated for ages 10 and up, and although younger players could easily understand how to play, they would not fare well when it came to the “if this, then that” part of figuring out the locations. Our girls are 10 and 12 and both had very little problem solving the puzzles. In fact, our youngest found one treasure than NONE of the rest of us located. Yes, she beat me (again). I’m embarrassed to say I came in dead last. Aargh.

Want to find out just how smart your kids are? This will put them to the test! You can find Plunder at Amazon or direct from R&R Games. If the company name sounds familiar, it’s because we’ve highlighted a number of their great titles over the past year. Both Igor and Coal Baron are staples at our local game nights, and Qin hits the table at home quite often.

Be sure to check out their Facebook and Twitter timelines to see what they’re working on next. I hear they’ve got some good things in store for the holiday season this year!

What game have you played with your children that surprised you how well they did?