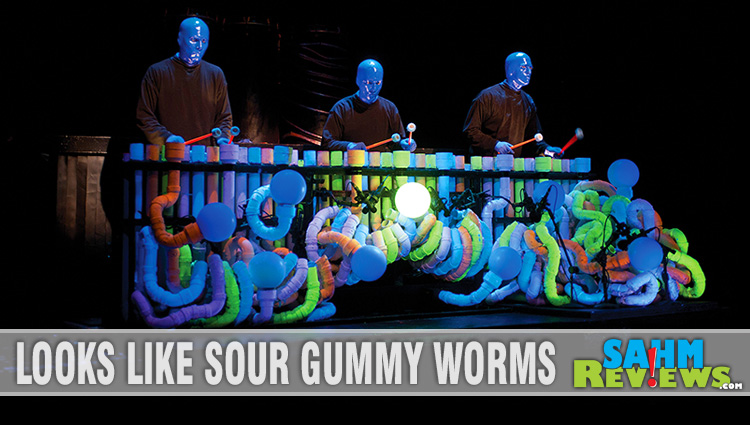 When Blue Doesn’t Equate to Sad

Back in the PK days (pre-kid, that is) Scott and I worked hard, but we also found opportunities to enjoy ourselves. We had season tickets to the Lakers and still reminisce about the incredible game where Robert Horry beat the buzzer with a three-point shot to win the game. Scott’s job had him traveling a lot, so whenever possible I would cash in a few of my vacation days at the city and catch up with him on the final day of one of his conferences. One of his frequent destinations was Las Vegas. He had conferences there quite often which was great because I always enjoyed the sites and sounds of that city. One of my favorite things to do in Vegas was catch a Blue Man Group show. 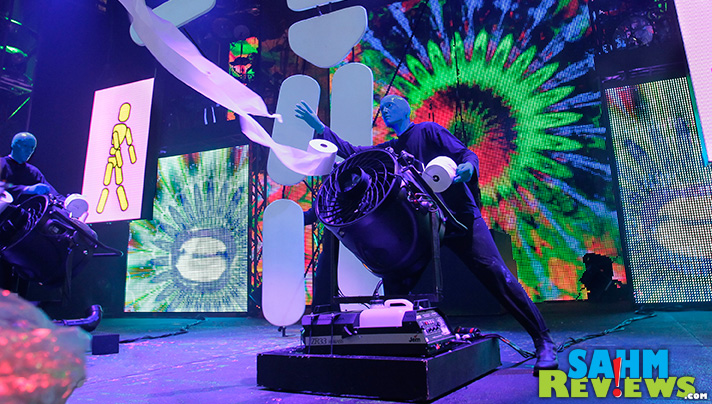 No matter how many times we have gone to see them, it has always been a treat. Each show is filled with surprises. Even when you know what is coming, it is still fun to see the reactions of the people around you who have never experienced it before. For the uninitiated, their show is a combination of theatrics, music and comedy. The Blue Men don’t speak, so it’s fun to see a story unfold by their use of mannerisms. The reactions of the audience help amp up performers in any type of show, but with a Blue Man Group performance it is more apparent. Audience participation makes an already awesome event even more enjoyable. 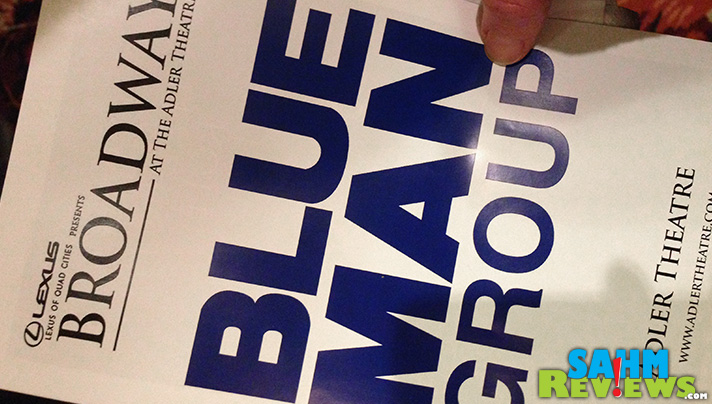 We recently introduced the girls to this fantastic performance group when their traveling troupe was here in the Quad Cities. I was sure they were going to enjoy it as much as I always have and I was right. It’s like a cross between a Broadway show, a comedy act and a concert… what’s NOT to love about that? The program is pretty amazing. 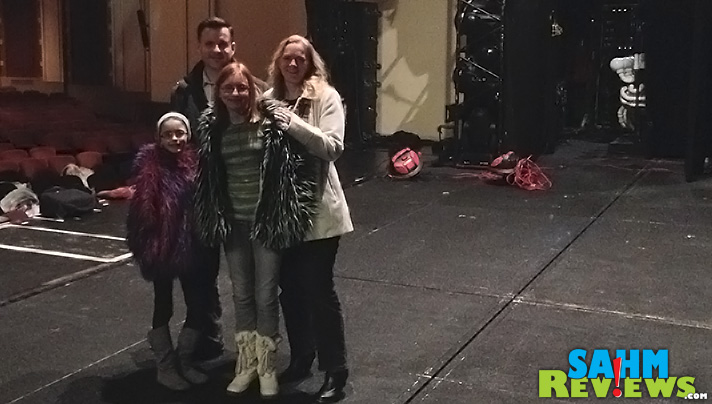 Since the girls are involved in music programs, they were actually very intrigued by the process and the history of how Blue Man Group came about. We were given the opportunity to go behind-the-scenes after the show and were able to ask a few questions of one of the Blue Men when he was un-Blue and walking around in his street clothes. The tour manager and the Blue Man answered a few of our questions. All that did was raise more. When we returned home, we took some time to pose a few questions for the team.

A few were directed at the groups founders and Phil Stanton was kind enough to answer.
Miss M (12) from SR: How did you meet each other?
Phil Stanton: By pure chance I met Chris Wink on the first day on the first job I had in New York City soon after I moved there. We were both working as waiters at a big catered dinner at the Met Museum. Funny, but we were sent together to go around and empty all the garbage cans in the kitchen! We’ve been making a mess in one way or another ever since!

SR: How did you start your career of being Blue Man Group?
PS: We wanted to create some kind of performing project that would use all of the things we were interested in. We were all interested in Art, Science, Music, Theatre and Comedy. Chris had an idea about painting himself and me blue head to toe. We decided the Blue Man would be curious about all the same things that WE were curious about, and Blue Man Group was born!

Other questions were general and were answered by one of their performers, Brian Tavener.
Miss K (10) from SR: Why did you decide to perform like this? Why did you choose to not be anything else? Like a pop star? You chose to be blue men who don’t talk.
Brian Tavener: Blue Man Group requires a unique skill set, indeed. That was part of the intrigue of the show when I first saw it. It seemed like a challenging way to perform, and proves to be every show. As a performer it’s always nice to find new and exciting ways to entertain from the stage. I guess that’s why I have chosen to perform this show for so long.

Miss K (10) from SR: Why did you choose blue instead of a different color?
BT: Blue was chosen because it is a welcome color to look at—inviting, enticing, mysterious. And come on, everyone loves blue!

Miss M (12) from SR: How did you meet each other
BT: For me personally, I have met most people in the company just by working in different casts. And happy to have met all of them, too!

Miss M (12) from SR: How did you start your career of being Blue Man Group?
BT: I sent in a package of material I thought would interest the casting department. I lucked out that it did, and was invited to audition. I had my first audition in Los Angeles almost eight years ago, and then was invited to a call back in New York, followed by a month long training process to learn the show. Then the rest is history!

Nicole from SR: What is the significance of Cap’n Crunch? (And the marketing person in me has to ask) – Has Quaker ever asked Blue Man Group to work on a promotion together for Cap’n Crunch?
BT: The Blue Man is all about taking everyday objects, especially those our society likes to brand and market, and use them for a more universal reason. In the instance of “Crunch”, why not use it for what the name implies—a loud “crunch” made into song! A song that, hopefully, instills everyone with a sense of humor and lightness. As far as I know, we’ve never had any affiliation with Quaker for marketing reasons—that would kind of reverse the point of using it in our show the way we do.

SR: The three lead Blue Man Group performers aren’t singers. Are new cast members generally musicians, actors or comedians? (or other?)
BT: Performers who fit the role of the Blue Man come from all walks of like. All of us are usually trained as actors or musicians or both, but it is an extremely diverse group of talent. One of the performers used to be a chemist!!

SR: Blue Man Group is more than just 3 men performing. How many performers are there for each show? Who composes your music?
BT: There are always 3 Blue Men in each performance, and an amazing band. On tour, we have 4 band members—2 strings players and 2 percussionists. The band live-scores the show in an extremely organic way. Each movement of the Blue Man can be represented by little elements of the music—the Blue Men feed off the music, and the band feeds off of the Blue Men. It is my favorite part of the performance!

SR: How many performers are part of the entire franchise?
BT: We have about 60 active Blue Men in shows right now, with about the same number not active, but have at one point performed. There are probably double that number of band members actively performing the show.

SR: How to you refer to the team? IE Do you say “the Blue Men” or do you always refer to them in singular? Does each troop consist of 3 lead blue men and supporting cast or are all cast members eligible to be a lead?
BT: All the cast members are Blue Men or Band. As Blue Men, we are trained to perform one role (Left, Center, Right), and after a year or so usually trained into a second. Then eventually the third for some. So most of us can perform all three roles after being with the show for a while.

SR: We had the chance go back stage and talked to one of the performers. Not all of the performers are American. What nations are represented in Blue Man Group?
BT: We have performers from all over the world. That’s the best part of meeting people in the company, so many perspectives! 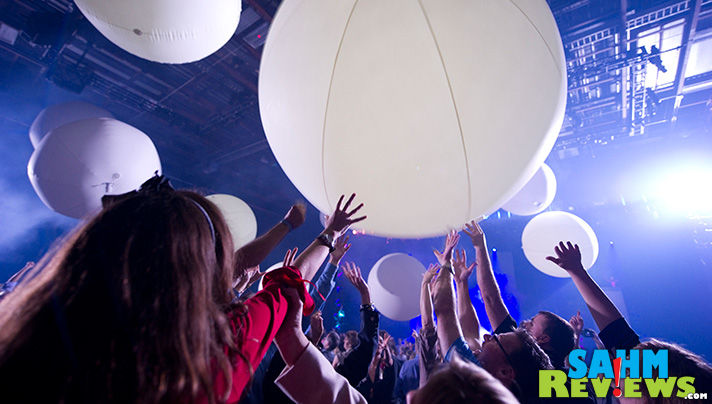 If you live in or near one of the major cities that has a permanent show, be sure to take your family to see it. If not, keep your eye out for their traveling show and catch it when it comes through a city near you. It’s great family fun presented by some very diverse and talented performers.

Stay up to date with Blue Man Group by following them on Facebook, Twitter and Instagram. Be sure to give them some shout-outs while you’re waiting for the show to start. Never know when something you do or say might turn up as part of the show!

Have you ever attended a Blue Man Group performance?

11 comments on «When Blue Doesn’t Equate to Sad»