Lately I’ve been on something of a shoe-buying spree. Not because I’m a fanatic about fashion, but because I appreciate applying the right tool (or shoe) to a job. Sneakers are for comfort, running shoes are for running (duh), boots are for warmth and slip protection, while snow boots are for keeping your feet dry while traipsing through the wet stuff. But never, ever have I resorted to stealing shoes off of a scarecrow!

One of my favorite places to shop for shoes is MyHabit. Owned by Amazon, this site has daily sales of closeout brand name and designer clothing, shoes, outerwear, home decorations and more. Sometimes as much as 95% off! I do admit to checking it once a day right after 11am Central to see what new items they have available. Many times there is only one of each available (like Rolex watches) and others you have to hope they still have your size available. It truly is a snooze-and-lose situation.

In 2013 I needed a pair of new boat shoes, not because I own a boat, but because they make a great alternative to sandals in the summer. I chose a brand that was on MyHabit that had decent Amazon reviews and ordered them. They arrived a few days later and quickly became my new favorite summer shoes.

But…this past January I was in the market for a new pair of boots to help combat this uncommon amount of cold this year. Again I found a pair I liked on MyHabit, and from the same company that made the boat shoes I loved so much. The second time wasn’t a charm however. When I put them on I found that they were running quite large. Nearly 3/4″ larger than the same-sized boat shoes I had previously ordered. I inquired to the company directly about this discrepancy and was basically told “that’s the way it is”. While I do understand variances in manufacturing and that some styles may fit differently than others, there are still shoe sizing standards that a consumer should expect manufacturers to adhere to. Back to MyHabit they went. 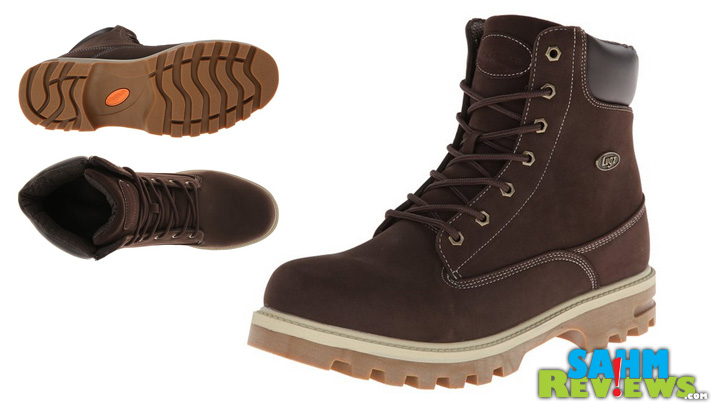 Nicole commented that I should look at Lugz brand as she was ecstatic with the pair she was trying out. She is even giving away a pair, but I didn’t think I’d look very good in heels. I selected a pair of Empire in brown solely from the photos on their website. It seemed to have everything I was looking for – a slip-resistant sole, water-resistant upper and padded tongue, but also included something I have never had in a boot. A memory foam insole!

Monday night we received nearly an inch of freezing rain and I was able to truly put these new boots to the test. While the ice is still slippery, I could definitely tell the rubber compound was doing its best to keep me upright. Because of the great fit (both in sizing and the snugness of the padded tongue and memory foam), I felt completely stable walking up and downhill without any additional support. It goes without saying that they also did a great job of keeping my feet warm in the sub-freezing temperatures.

Like Nicole’s Sophia boots, they have a soft suede outer which can show scuffs.  Fortunately these usually aren’t permanent and are a feature of the material, not a defect in workmanship. In fact I took a very close look at the stitching, gluing and general assembly and can definitely tell that Lugz has its eye on quality. I have found that boots in this price range (under $100) usually have minor manufacturing defects like stray stitches, tiny pieces of glue sticking out or even a burr on the eyelets for the shoestrings. I literally cannot find a single thing out of place on my pair (nor Nicole’s). I feel confident that my next pair (yes, there will be a second) won’t disappoint me like the other brand did. 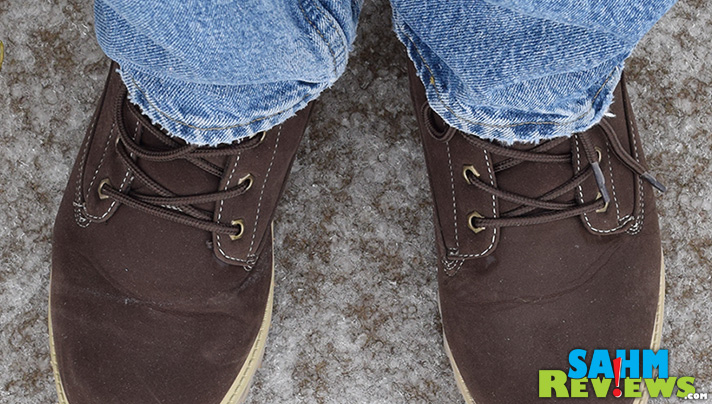 Want to learn more about Lugz? Check them out on Twitter, Facebook and Instagram. They always have new designs in the works and you can be among the first to see them! And you can try them out for yourself by winning a pair exactly like mine! Enter below and come back tomorrow for more entry opportunities. Your feet will be glad you did.
Lugz Empire Boots (ARV $90)

67 thoughts on “Olaf is Scared of My New Winter Boots”