Home / Recreation / Games / Families that Play Together, Stay Together 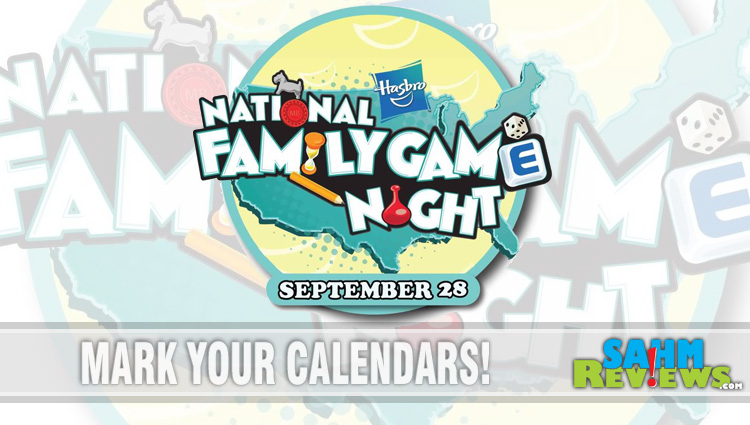 Growing up, I recall many nights of the family sitting around the kitchen table having a family night. Sometimes we played card games like Hearts, Spades or spoons. Other times we played board games like Monopoly, Trouble, Sorry, Yahtzee, Life or even Risk. No matter what we did, it was a great time and something that I’m glad my parents took the time to do with us.

My girls are a little young for the games that we played then but we still occasionally will play something like Animal Soup as a family. More often, the thing that includes all four of us revolves around one of our gaming consoles. We introduce them to a variety of cultural events, conventions and collector shows so we don’t feel guilty about spending time playing video games with the kids.

Before Christmas, an EA (Electronic Arts) representative sent me Hasbro Family Game Night for the Wii. With the holidays, things were a bit crazy but I took it on vacation with us when we went to visit my MIL and BIL in Alabama. I’m so glad I did.  We really had a chance to put it to the test because there were five adults and two kids present to switch between the various games. It includes a variety of the games we grew up with like Yahtzee, Sorry, Connect 4, Battleship, Boggle along with a new game, Sorry Sliders.

Hasbro Family Game Night allows you to play in a few different modes with up to 4 players. Only have one controller? No fear – it’s playable with only one but flows much better if each player has their own controller. I didn’t find a way to use existing Mii characters so you just enter your name and pick from a short list of picture avatars (hot air balloon, soccer ball, a few faces). The process of adding a name is a bit daunting though since it uses a wheel format where you can only spin right/left until you hit your desired letter. A standard point/click virtual keyboard would be a much better option. Thankfully, you only have to add your name once and it stores it so it isn’t that big of a deal.

The graphics for the entire thing are cute including animation when you select a game and when you put it away. As another example, Mr. Potato Head is the emcee for Sorry Sliders. The overall visuals of FGN are very colorful and enjoyable to watch.

As for sound effects – the game aspect is awesome but the sounds you hear in the background while playing your game get old very quick. Family friend, T, asked “Why are there sirens in the background? Does the family live in that kind of neighborhood? Let’s have family game night in the slums.” I swear I could have slugged him because now every time I play the game and hear the sirens that’s all I can think of. At least it makes me laugh though. 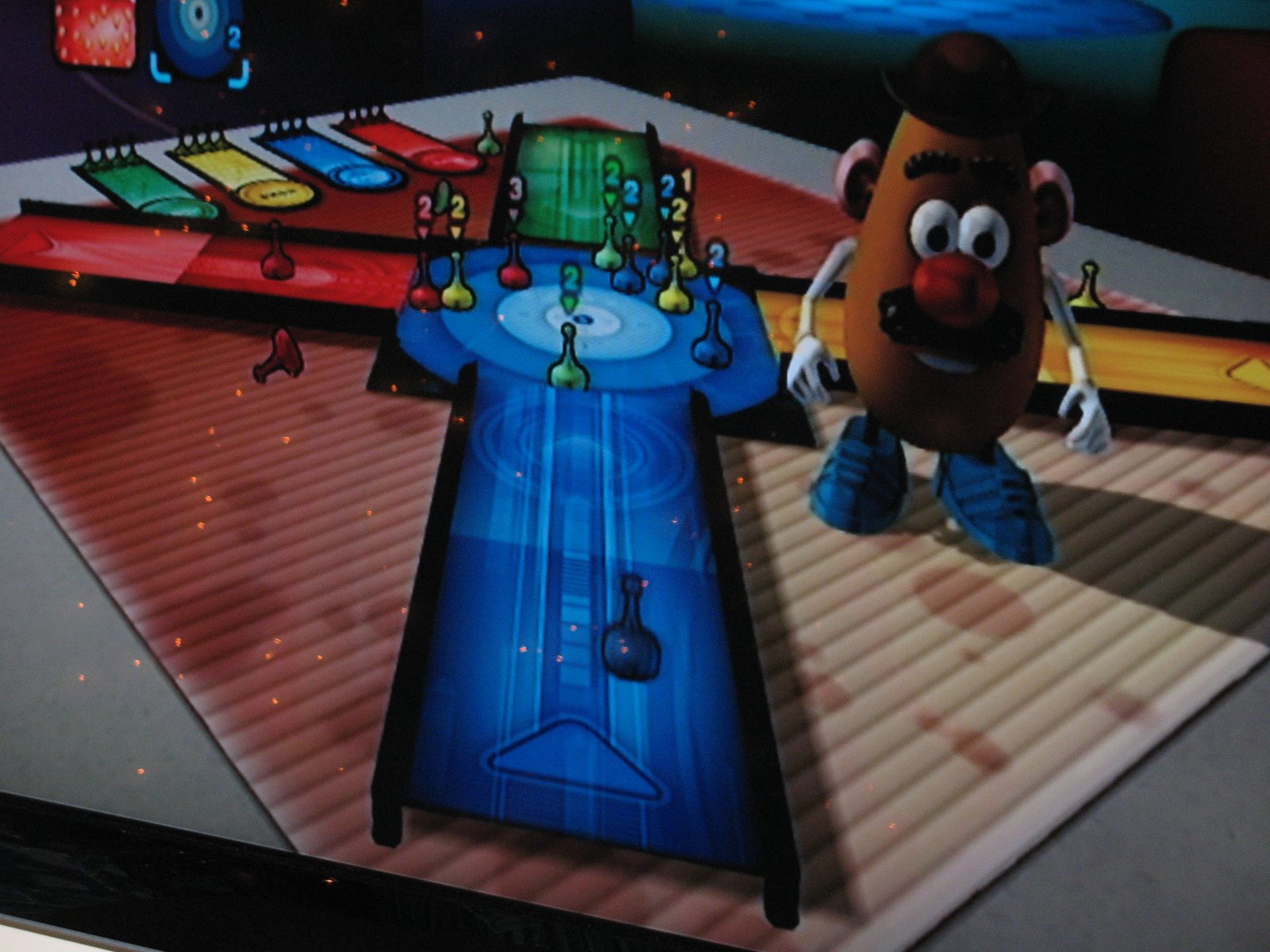 The girls’ favorite game was Sorry Sliders so I’ll tell you a little about it first… It is fun with an easy learning curve. Adults playing it will probably put more of a strategic spin on it but kids can play it too. The remote took a few tries to figure out – swing it up like bowling. Reading the instructions would have solved that problem much quicker, but we were much too anxious to play to sit and read the instructions. Pfft. Same thing happens with every other item we own so it wasn’t anything new to this video game.

I can’t say which my favorite is – I really enjoyed revisiting Sorry.  I haven’t played it in years and couldn’t even remember the rules.  They take care of that for you by adding plenty of notes as to what the different cards do and what it takes to get out of the home.

I’ve always had a special place in my heart for Yahtzee.  When I got older I justified playing craps as being ‘just like Yahtzee.’  Playing Yahtzee on Family Game Night was fun and even when playing solo doesn’t seem quite as lonely as being the only person picking up the dice in the real-world version.  I’ve played Yahtzee type games on the PC before but you don’t get the whole feel and experience of shaking the dice.  With the Wii controller in hand, you can shake to your heart’s content.  One caution about Yahtzee in FGN for the Wii though – The scoring system is a bit glitchy.  You have the option of using the pointer or the arrow keys to record your score.  I can’t explain it very well but will say that using the keys is a better choice because the pointer tends to jump to the wrong line.  You know how frustrating it is to have a large straight and go to score it but accidentally end up clicking 0 on full house?

Boggle was probably the game I was most surprised by.  I never played it much as a kid (although DH and his family did quite a bit).   Wasn’t sure if I would enjoy it but once we started I got hooked.  When I should have been typing blog posts, I was playing Boggle.  As a family, we opted to play it as a team.  One person had the pointer and clicked the letters to spell the words.  The rest of us took turns shouting out the answers.  It’s timed so having a steady hand with the Wii remote is a huge plus.  Oh – and learn to go fast since it’s time.  It was comical when we first loaded it up because my husband, BIL and family friend were all fighting over whose turn it was next with the remote.  DH said to his mom “I can see you and the neighbors sitting around (the Wii) playing Boggle.”  One cool feature of the Boggle game is that it had a hint at the bottom that showed how many letters the longest possible word remaining was – and what letter it started with.  When you finished the round, a list of possible words was displayed so it actually helps to improve your Boggle vocabulary.  I won’t say it helps your overall vocabulary because we couldn’t figure out what some of the words were or in what language.  T, the family friend who was playing with us is nationally ranked in Scrabble.  There were several words that he tried that weren’t accepted.  I didn’t realize that Scrabble and Boggle have different dictionaries but apparently they do.  But for those of us who aren’t Scrabble brainiacs, there were plenty of words to keep us busy during our allotted time.

Miss M and I played Connect 4 – a game we don’t even own.  She isn’t familiar enough with the entire concept to see ahead to different moves but she picked up on it quickly and as long as I didn’t rush to win we had a great time playing it.

Overall, this is a very diverse game and a ton of fun.  Thanks to EA (Electronic Arts) for putting together a game that brings back such happy childhood memories for me and is reinventing family game nights for families everywhere!

One comment on “Families that Play Together, Stay Together”