Deduction games are not new, even though it seems like it with the number of them being issued every year. Today’s market is full of great examples like Deception: Murder in Hong Kong, One Night Ultimate Werewolf and even the parody game, Clue: Lost in Vegas. But figuring out who the killer/mystery person is in a game has been a theme used many, many times. The original Clue and Guess Who? are common examples of this mechanic, and there are hundreds of others.

This week’s Thrift Treasure find is one of those. Originally published in the early 90’s, Alibi by Mayfair Games was updated and reissued in 2007 and closely resembles another older deduction game, Whodunit. This version discards the use of a board, relying solely on cards. 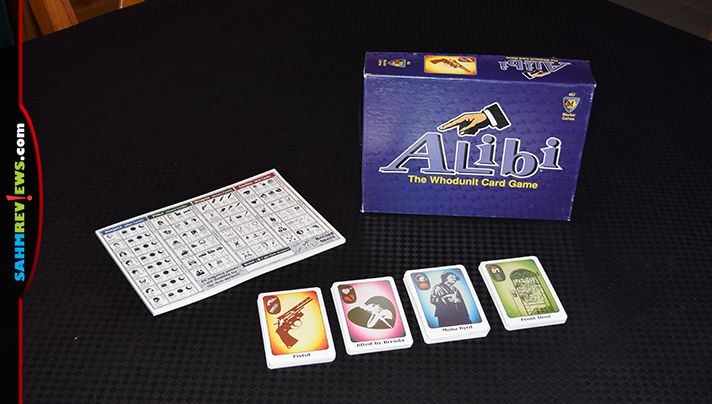 There are four types of cards (suspect, place, weapon and emotion) which are shuffled separately. One of each type is drawn and hidden inside the game box without anyone looking at them. The goal of the game is to deduce the identity of these four cards. The remaining cards are shuffled together and dealt out to all of the players (up to ten players are supported). 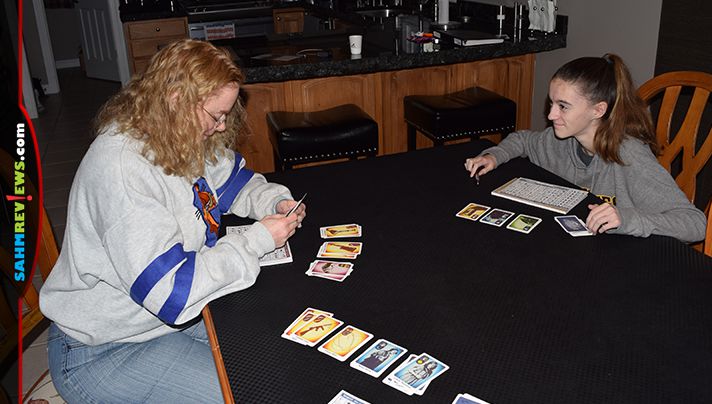 Each person begins the game with these cards and a record sheet. Any time a player gains possession of a card or learns that another player owns a particular card through questions, they should mark off that card on their record sheet. On your turn you will either ask a question or make an accusation (which immediately ends the game).

The first player starts by asking any other player any question that can be answered with a number. For example, you might ask, “How many Alleyway cards do you have?” (there’s only one in the deck). Or you might ask something more general like, “How many Weapon cards do you have?” (there are 18 in the deck). The player asked must answer truthfully and to the best of their recollection. 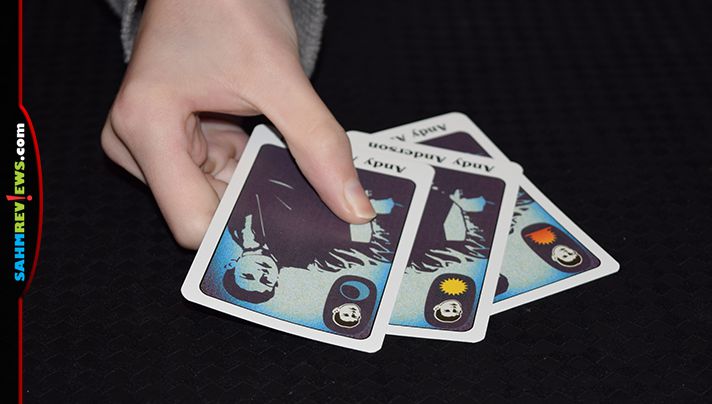 After each player’s question is answered, everyone passes some of their cards to the player on the left. During the first round, one card is passed. Pass two cards during the second round and so on. Whenever a player has a complete set of three cards in their hand that have the same upper icon, they may meld the set by placing it on the table face up in front of them. Melded sets score points for the melding player, but also reveals the existence of the cards to all players as they are laid down face-up. Points are given for when in the game the set was melded. Higher amounts for the first round, fewer for the second round and the lowest amount during the 3rd round or later. 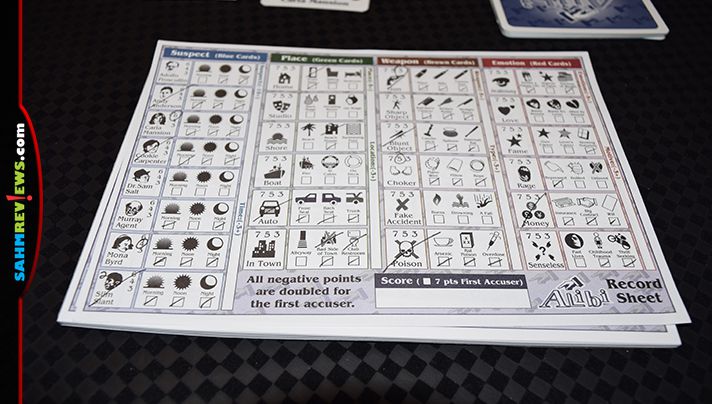 Instead of asking a question, the active player may choose to make an accusation. At this point the game ends and no player may meld sets. This person becomes the “First Accuser” and will try to identify the Suspect who they believe committed the crime and must fill in at least three of the remaining seven accusation blanks on the score sheet. Each of the other players also write out an accusation as well, filling in as many of the blanks as they desire. By writing an accusation in a box, a player identifies a card set or specific card they they believe is among those hidden in the game box.

Players receive points as follow – the First Accuser gets a 7-point bonus for being the one to start the accusation process. For each correct accusation, a player receives the score in the accusation blank on the score sheet. For each incorrect one, they will lose those points. The First Accuser also loses double the regular points for any incorrect answers! Adding in the meld points earned during the game, the player with the most points wins the hand. Alibi may be played as a one-hand game, as a series of hands or to a time limit. The person with the highest overall total wins Alibi!

There’s much more to Alibi than a reskin of Clue where you’re just trying to find out what the hidden cards are. Melding sets and predicting what the cards are ensures that the first person to go out isn’t always the winner. You can still find brand new copies on Amazon for around $15 shipped and is a great value considering how much a game of Clue runs!

What is your favorite deduction game?