Home / Technology / Mobile / How Parents are Punished by Modern Discipline 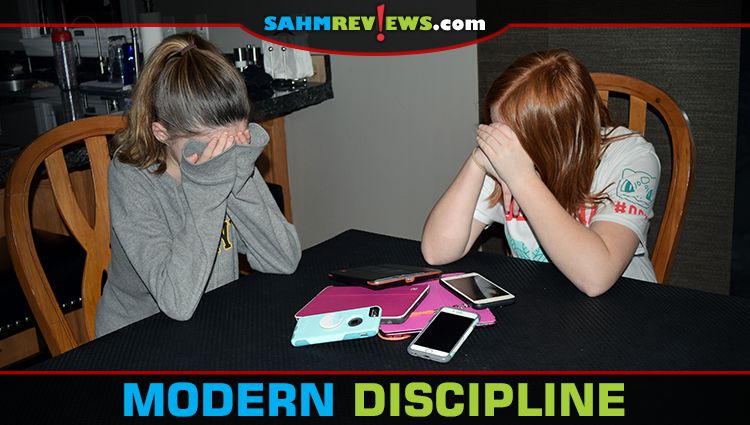 Last week I shared 15 ideas for family bonding. We have a close-knit family but as I said in that feature, we do have rules and rules sometimes get broken. My first job is to be a good parent and sometimes that means making difficult decisions. Discipline is difficult for many reasons, but mostly because everyone suffers in hopes that a long term lesson is learned. The nature of modern discipline methods is that we take away some of the luxuries in the child’s life. Unfortunately, some of those are luxuries for the parents as well.

Things are far different for kids of this generation than it was for mine. Discipline in the 70’s meant you either received a spanking (hand, wooden spoon and belt were the most common) or had your mouth washed out with soap. We weren’t grounded from going outside because our parents WANTED us to be outside. We weren’t assigned extra chores because we were already expected to do all the things our parents expected us to do. We weren’t usually grounded from television or electronics because (1) there weren’t any electronics besides television and (2) the only time we cared what was on TV was on Saturday morning. However, modern discipline doesn’t involve any type of corporal punishment but instead typically revolves around electronics, specifically kids’ phones.

Despite having two wonderful daughters, there is always room for growth. Sometimes it’s something vocal like talking back. Disrespect is absolutely unacceptable. Other times, it’s failure to do something. My girls don’t get allowances because they are either expected to contribute to the household or they’re expected to get “homework” done. Homework refers to anything relating to school or assignments and practice time as recommended by their music instructors. We also have a puppy now and the girls are learning that a puppy is a big responsibility. But life extends beyond normal chores (I don’t want to have to remind anyone to brush their teeth), beyond the puppy (it’s a living, breathing creature that needs to be fed, bathed, walked and played with) and beyond schoolwork (extra curricular activities and socializing are the first to go when grades slip). The divide often comes when their chores and schoolwork aren’t completed because they’ve been distracted by a device.

That makes me livid. No matter how many times I say that they shouldn’t have electronics in front of them when they’re eating, working, getting ready for bed or whatever, it falls on deaf ears. So we do what every reasonable parent would do and we remove the distraction. Modern discipline at work: Devices are grounded until good behaviors take root and bad behaviors are put into check.

But what happens is that we all suffer. While the girls do not have their devices for all the things they love to do, there are benefits for parents when kids have phones. I like knowing where they are and when they arrive at or leave school. I like being able to contact them via text. I like that we share a calendar and can confirm they aren’t missing appointments. I like that the high school uses devices to communicate with the students. I like that a device is easier to carry than a textbook. The phone isn’t only for them, it’s for me too. So when they get grounded from it, I struggle as well. And that’s just frustrating. But what can we do? What other way can we get through to them?

As much as modern discipline has changed over the years, I know when kids hit a certain point it circles back to the way it was when I was growing up…

…When you break the rules, you lose car privileges.

How do you discipline your children?

29 comments on «How Parents are Punished by Modern Discipline»