As you might imagine, there have been scores of card games that try to expand on the classic Hoyle game of War. We’ve covered quite a few of them as we find them at thrift and since War was one of my favorite games growing up, we keep them all in our collection. Usually there isn’t much difference in the featured game and the classic – maybe a new tie-breaking mechanic or unique art. But this week’s Thrift Treasure find is probably one of the more complex attempts at a War re-theme that we’ve encountered.

Alien Hotshots by Gamewright was originally introduced in 1998 and received a prestigious “Best Toy Award” from the Oppenheim Toy Portfolio, an independent consumer review of children’s media by child development experts Joanne Oppenheim and her daughter Stephanie Oppenheim. While not as revered in today’s game market, at that time this award was one of the most sought after.

As previously hinted, Alien Hotshots is another take on the game of war. Beautifully illustrated alien and space-themed cards replace the standard Ace through King and only include the numbers 2, 4, 5, 7, 8, 10, 11 and 12. The rest of the deck is made up of Power cards, including Odd and Even Eaters, Space Germs, Plustoids, Minusaurs and Black Holes.

Just like in the original game of War, the entire deck is shuffled and dealt out evenly among all players. Everyone stacks their cards face down into a draw pile in front of them. To start a round, each player takes the top card from their pile and throws it face up into the center of the play area simultaneously. 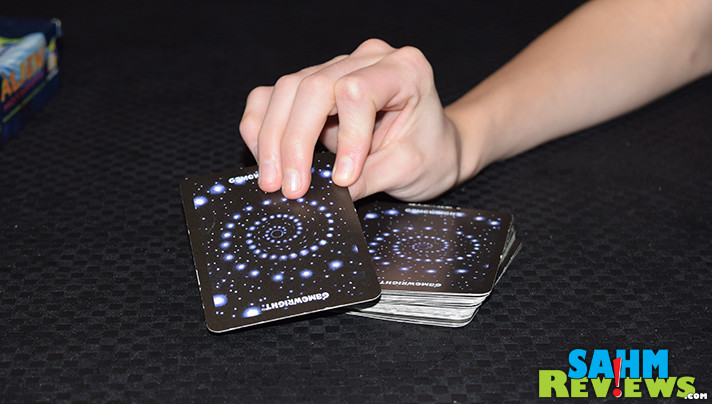 If all of the played cards are Aliens, high number wins. If the high number is tied between two or more players, a “War” ensues and the battling participants each lay two cards from their pile face down and a third card face up. Whoever throws the winning face-up card takes all of the cards in the center. If these also tie, repeat until there is a winner.

So at this point, the game is just War. But it’s the introduction of Power cards that really add another layer to the game. Odd and Even Eaters do exactly that – they “eat” any Odd or Even cards in play. For instance, if the cards are 12, 11, 7 and an Even Eater, the 11 would win (the Even Eater eats the twelve, but the 11 is now the highest card). If both and Odd and an Even Eater is played, they will eat all the Alien cards and then tie – so a war commences. Unless a 2 was played – it’s a disgusting, slimy Alien and cannot be eaten. So it will always win over an Eater.

Space Germs make all the Aliens sick, so when thrown they will have all other Aliens placed underneath them. That is unless it is the Alien 4 card, which cannot get sick since it is germ-proof. Plustoids and Minusaurs also are unaffected by germs, so they too are unaffected. 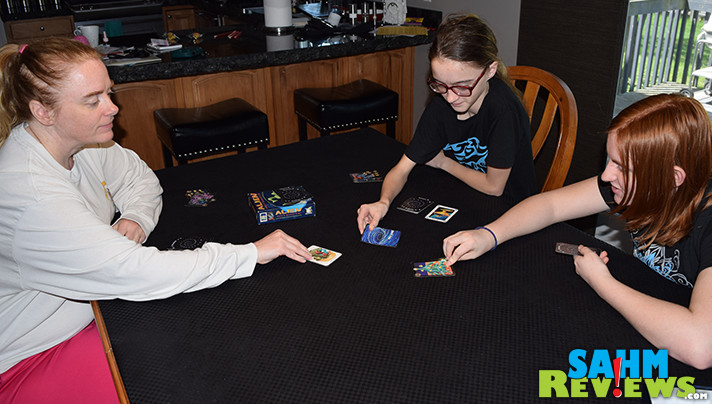 What are these Plustoids and Minusaurs? They are flying Aliens that when played enter orbit and are not involved in the immediate battle. When thrown, that player will throw another card and collect the Plustoid/Minosaur to their area to be used at any later time. These cards add or subtract from Alien cards to help you win a round. Obviously they might also change the odd/even value of an Alien, preventing them from being eaten. 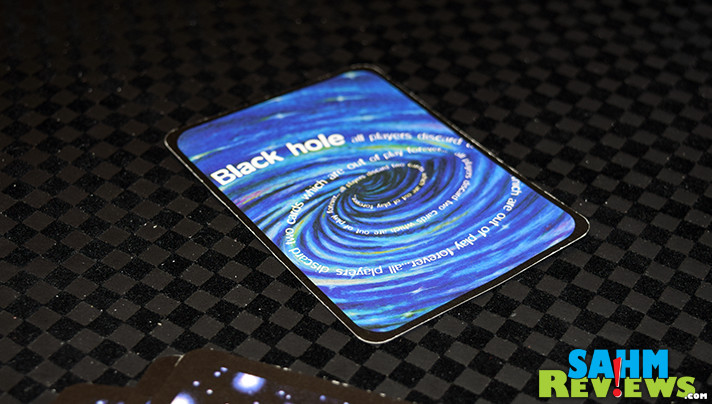 Lastly, the Black Hole card “sucks” two cards from the top of every players’ piles and removes them from the game. The player who threw the Black Hole then plays another card and the winner of the round keeps the Black Hole in their discard pile.

Any time your draw deck runs out, shuffle and deal from your discard pile (the cards you won), just like in a regular game of War. If you run out of cards, you may use any leftover Plustoids or Minuses to either help other players or auction them off to the highest bidder (other players bid their cards). Ultimately, when you’re completely out of cards, you are eliminated from Alien Hotshots.

The overall winner of Alien Hotshots is the last person remaining with cards and everyone else has been eliminated. Again, as in War, this can be quick or last for a very long time depending on the luck of the draw. Fortunately with the addition of Black Holes, the longer the game, the fewer cards remaining!

While copies of Aliens Hotshots can be found on Amazon from 3rd party sellers, your best bet is to pick one up on eBay where they can be regularly found for around $10 shipped. As always, keep an eye out for a copy at your local thrift store – this one is definitely worth picking up for a few bucks just for the artwork alone!

Is War a favorite card game of yours?