An amazing thing about today’s global economy is how we can purchase products that previously would have never made it to the United States. Websites like Kickstarter allow any company worldwide to offer up brand new products and services via a crowdfunding campaign. Alibaba and Aliexpress allow us to purchase direct from China-based sellers and Amazon has country-specific domains that will ship to the U.S. for an additional charge. The global marketplace has never been smaller.

Case in point – recently a company based in the South of France began shipping the rewards from their latest Kickstarter campaign. HOPE by Morning wasn’t their first game, but it certainly is their most ambitious to date. You might recognize two of their previous titles that were distributed by Foxmind here in the U.S., Kulami and Six. HOPE is quite different from those wooden abstract games and is one of our favorite types of games to play as a family – a cooperative game!

The game of HOPE comes with a bit of backstory. Set in the year 5341 and a human population of over 193 billion, our universe is beginning to collapse upon itself. Our species realizes that life itself is the stabilizing element and the only way to combat the regression of the universe is to spread life to other planets. Not just in our universe, but in the worlds of other dimensions!

You’ll discover the depiction of the three dimensions when you first set up the game board. Resembling the classic arcade game of Q*Bert, worlds appear on one of three independent physical dimensions, coded by color (red, blue and purple). The object of HOPE (Human Organization to Preserve Existence) is to travel to other planets in other galaxies (and dimensions), terraforming them and establishing a colony before the encroaching monolith either reaches Earth or its associated regression marker reaches the end of the track. 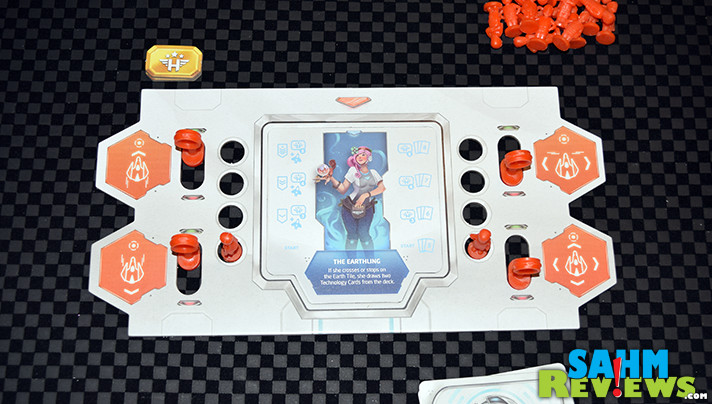 Each player (up to four) receives a Cockpit board and color-matching spaceship, navigation levers and all Pioneer figured. All ships start at the center of the randomly-seeded board in one of the three dimensions. Players also choose a character tile which is conveniently slotted in the center of the Cockpit board. You’ll also receive a number of Technology cards as depicted on the bottom right of your character tile. The Regression Monolith is placed on the border of the universe on a tile matching the technology symbol of a randomly-drawn card.

Starting with the first player and proceeding clockwise, each player may take one action – either Navigate or Polarize. Navigate means to move your spaceship according to your choice on your Cockpit card. You may select to either navigate towards gravity, away from gravity or sideways. When you move you may only move in the direction you chose and only through adjacent colors (dimensions). When moving, you will also move the matching level on your Cockpit board to show that you have taken that type of movement already. There is a fourth “Arbitrary” movement choice that allows you to repeat any one of the three previously-mentioned movement types. Once you have used up a movement, it may not be reused until you have Polarized.

Polarization is the method in which you will hop through different dimensions on the board. You will move your spaceship to the next dimension in clockwise order and place it in the nearest applicable dimension space towards your new dimension’s gravity point. At this point you will reset all of your levels on your Cockpit board! 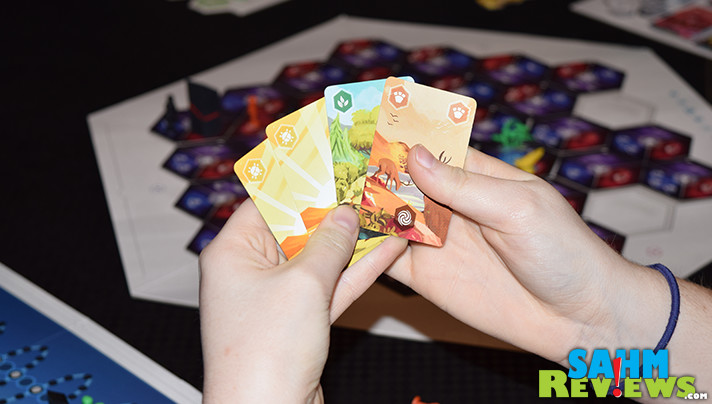 After all players have Navigated or Polarized, everyone gets a chance to Terraform the planets they are on (if they landed on one or more). Each tile represents a galaxy with blank spaces denoting planets in which you will place your Pioneers by discarding a Technology card that matches the symbol of the Galaxy tile you are on. If you don’t have a matching Technology card, you may discard any matching pair of cards or one of the few Joker cards in the deck. If your section has more than one empty space on it, you may discard as many cards as possible to place as many Pioneers as you wish to try to fill them all. Discard all of the cards you used to one of the three discard piles and take the one Technology card from the Replenishment Zone directly above the discard pile. As you can see, you will run out of cards pretty quickly. If you do not place any Pioneers on your turn, you may draw new Technology cards from the deck up to your hand limit. 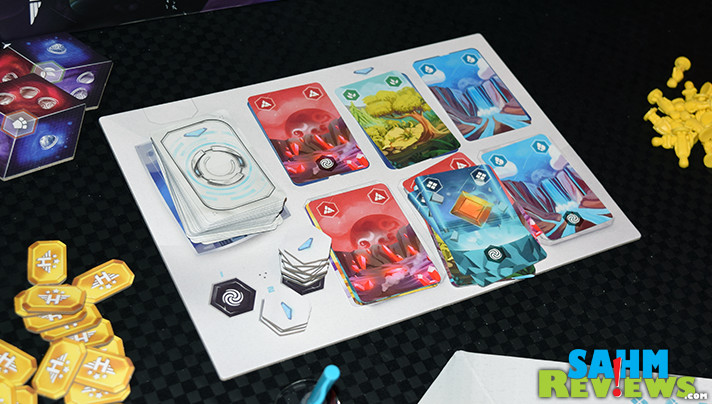 Ultimately your team is trying to colonize the entire galaxy and must work together to terraform all the planets in that system, in all three dimensions (if applicable). HOPE encourages teamwork, awarding Medals for sending subsequent Pioneers of a different color into a Galaxy. These medals are the game’s currency and can be spent to increase your Technology card hand limit or award you an additional move on this turn. You can also earn additional Medals by being the first player to place a Pioneer on a Galaxy tile on the edge of the universe, thus encouraging exploration.

Once a galaxy tile is filled with its limit of Pioneers, the galaxy is stabilized and the tile is flipped to the other side. A bonus token is now placed on that tile and is earned by the next player to pass through that galaxy in any dimension! All Pioneers in that galaxy are moved to the Mission Track board in any order. 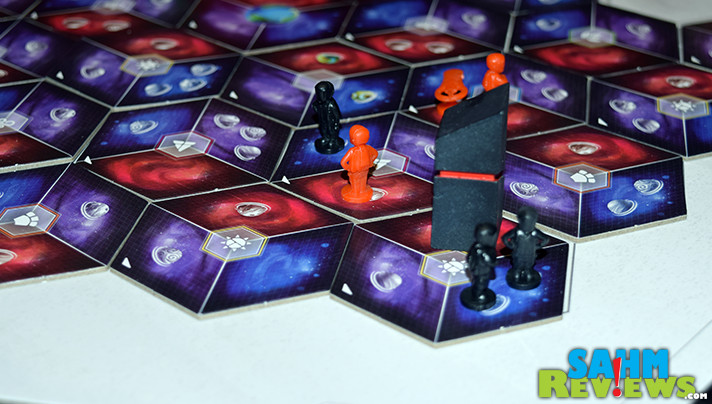 Lastly, once all players have finished their turns, it is time for the monolith to activate. This is the ‘being’ that is destroying galaxies and pushing the universe closer to its eventual destruction. Count the number of regression symbols seen on the exposed Technology cards in the Technology Center, add it to any symbols under the empty bonus token stacks and advance the Regression Marker on the Mission track by that number of spaces. You’ll notice that your team’s path is a straight line, while the Regression Marker moves in a wave. Don’t let that give you a false sense of security – he moves quickly!

Plus, any time the Regression Marker passes over or lands on an exposed Regression symbol on the Mission Track, the tile underneath the Monolith is destroyed and removed from the game (unless you’ve already stabilized it). The Monolith then also moves clockwise across the universe the number of tiles equal to the number of symbols counted previously. The next round begins in the same manner with all players either Navigating or Polarizing. 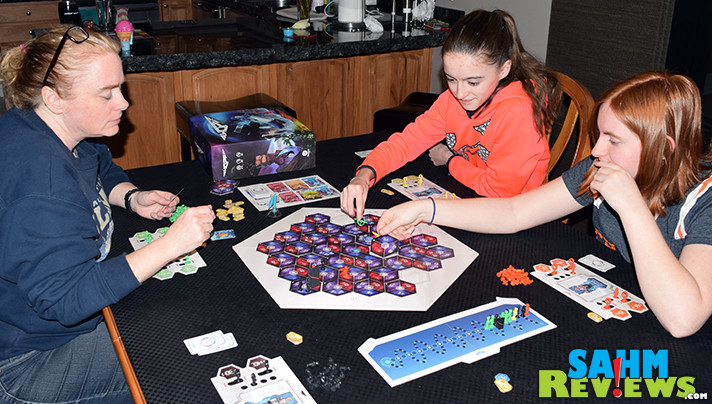 Your HOPE team wins the game if you get enough Pioneers on the Mission Track to reach the end of the board before the Regression Marker does. Obviously you’ll lose if the Regression Market gets there first or if the Monolith reaches and destroys the Earth tile.

A number of included game variations mix things up by adding a traitor mechanic (one player might be working against the group) and Bug cards that are drawn whenever a Galaxy tile is stabilized and can add positive or negative effects to the game. Players must pay Medals to activate any bonuses or negate any negative effects. Some Bug cards have immediate actions that are taken only once, while others remain in effect until paid for or replaced by a new Bug card. 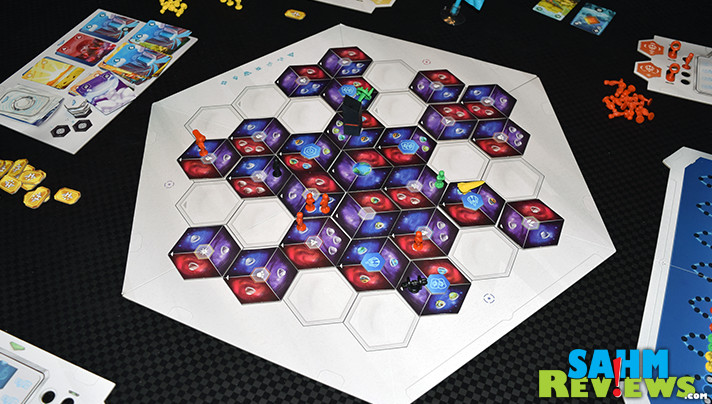 If you’ve gotten this far, you’re as intrigued by HOPE as we were. The game requires visual acuity since not only are there three dimensions to the board, each one has a different gravity direction. Over the course of a number of plays of the base game only, we found each win or loss to be VERY close, indicating a well-balanced game. The need to communicate your moves to accommodate the different dimensions and their planets along with the games insistence that you work together to earn in-game rewards are only a couple of the things you’ll need to successfully perform in order to have any chance of winning. 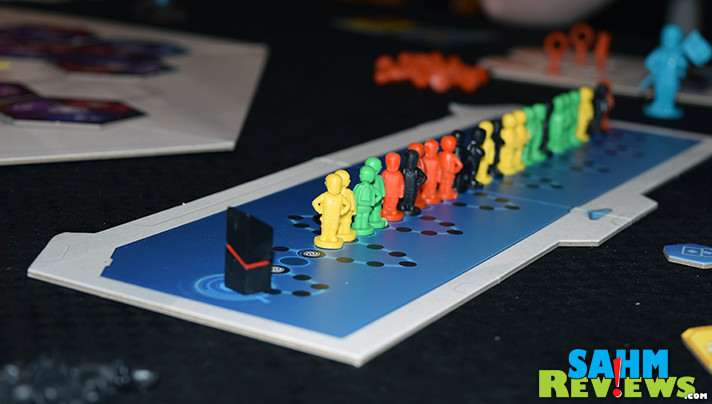 The quality of the game’s components are well above average with custom-sculpted spaceships for each player and a well-thought plastic flag with a suction cup to aid in the flipping of tiles without disturbing the rest of the board. When you do receive your copy, be sure to closely inspect all of the components. While nicely designed, we experienced what appears to be a more-than-common problem of one of the ships arriving broken. It was still playable, but the ship no longer stands upright like the others. It had to remain on its side.

HOPE is a very solid cooperative game with both a unique playing area and scoring (Mission) track that should see a lot of play if you enjoy team-based games. Right now you can purchase a copy direct from the publisher on their website or via the French Amazon website and have it shipped to the U.S. If it ever becomes available on Amazon.com, we’ll be sure to update you with this new information!

Curious about what else Morning has in the works? Be sure to follow them on Facebook and Twitter for the latest information and updates on HOPE’s U.S. availability.

Do you prefer cooperative or competitive board games?