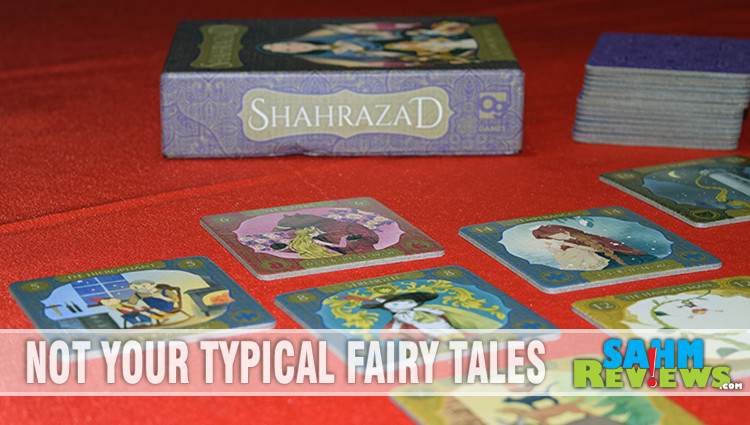 As much as we love playing games as a family, it’s a sad and simple fact that time is limited. The girls’ schedules are hectic enough with school and homework, but their participation in sports and extra-curricular activities further complicates things. Madison has considered getting a job this summer and of course, we cannot forget the responsibilities of owning a puppy. We still find time to play as a family, but not as often as we used to.

So we’ve been playing more 3-player games as well as finding solo and 2-person options for when not everyone is available to play. My latest fascination is with Shahrazad by Osprey Games because it’s a mix of calculated preparation, luck and teamwork. 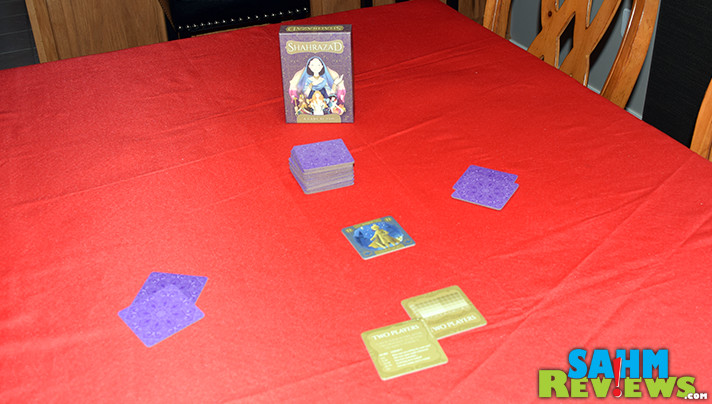 The game consists of 22 story tiles (numbered 0-21) that each depict one of four different colors – red, yellow, black and blue. You’re trying to tell stories to please the king but you’re doing it by piecing together a variety of folk tales from around the world. Each tile is a different story and stories of the same color are similar in topic. The king likes when you tell the same types of stories together. You’ll be placing all the tiles in a tableau in ascending order from left to right. How well you place the tiles depicts how well you did (or didn’t) tell your story to the king. 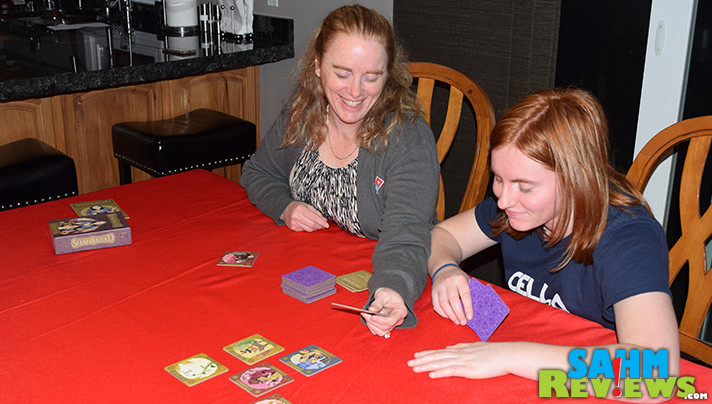 Grasping the concept of how to play is extremely simply. Converting it into something that pleases the king… not so much. Shahrazad takes place over two rounds, each played in an identical process. At the beginning of the game, tiles are shuffled and a random tile is placed on the table. Each player draws two and this is where things get interesting. You can’t show or tell your partner what tiles you have. You select one to play on the board then you can strategize with your teammate on where to place it. What are you strategizing about, you ask? Good question! You need to put the stories in some kind of logical order for the king. 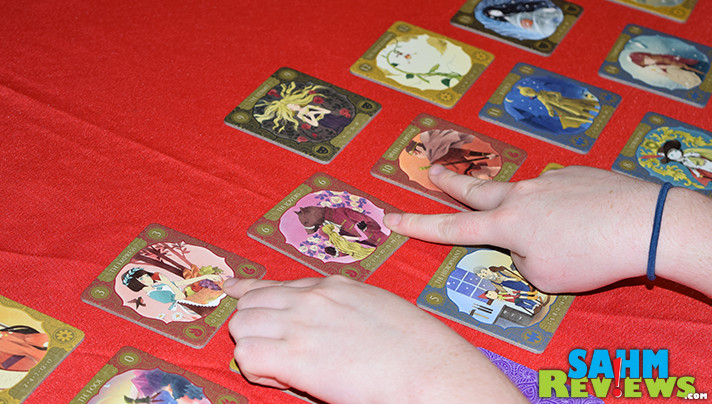 You can have as many columns as you like, each with up to 3 tiles (4 in a solo game). When you place a tile on the table, it needs to be next to an already existing tile. That means it can be above or below, or offset above or below on either side. Here’s the catch. The tiles always need to be in ascending order if you want to be able to score it at the end of the round. I’ll explain scoring in a minute, but essentially, you need to create routes across the board where the two tiles offset on the right of each tile are higher than that tile’s number. Whew. That was a mouthful. 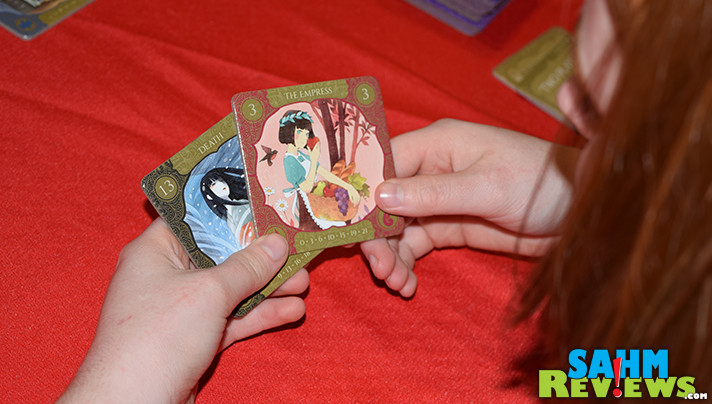 Once you place your tile, you draw another from the top of the stack then your teammate selects a tile to play. The process continues in this manner until all the tiles are placed. You’re drawing tiles at random and only have two choices each time. 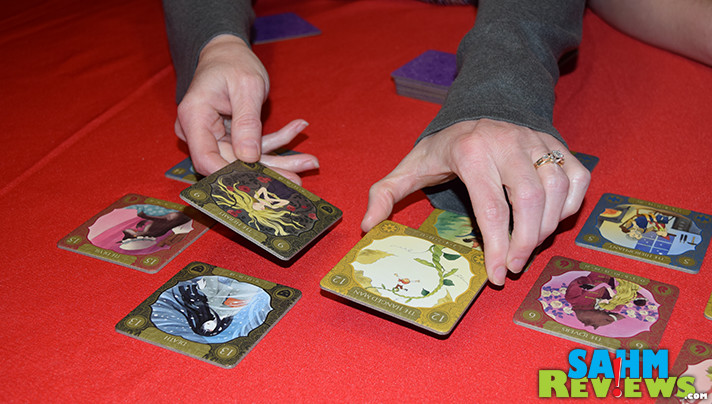 Unfortunately, they may not “fit” into the tableau as you had hoped. At some point, you may discover that you have limited options so you may opt to use one of your tiles to replace an existing one. You’ll still draw another tile at the end of your turn. The catch to being allowed to do this swap is that you’ll need to place two of your three tiles when it’s your turn again. 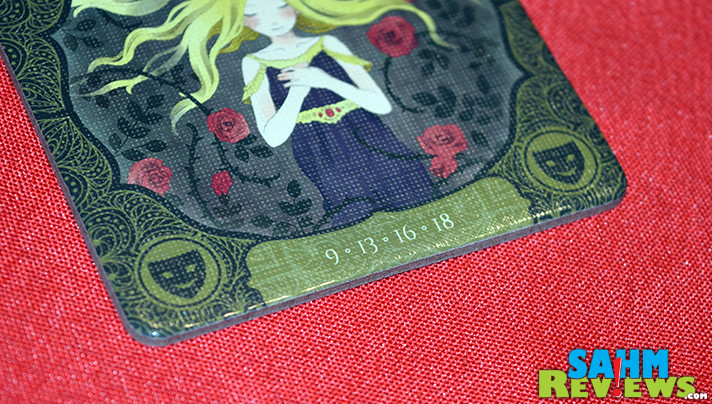 In addition to laying down the tiles in a logical numerical order, you’ll want to try to group like colors as much as possible. Each tile shows the other numbers that are part of that same color set to help with planning for groups. Remember, the king likes when similar types of stories are told together. It’s not necessary, but it does make a difference in the scoring. 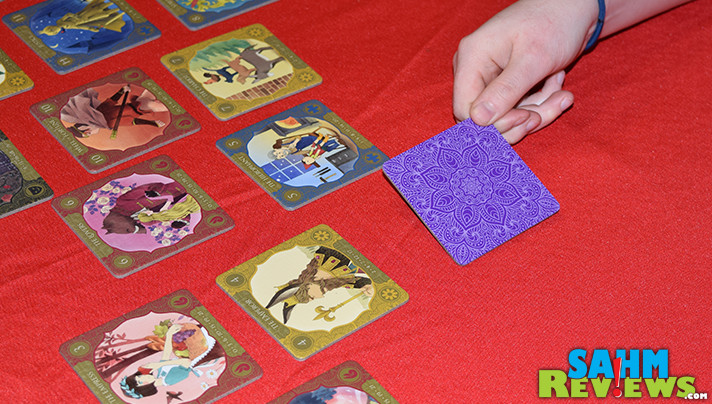 Which leads us to how you score which takes place after all tiles have been placed. First, you’ll check the numbers on your tiles. Any tile that has a lower number to its immediate (offset) right is invalid. You’ll flip the higher number over and it will score -5! Each face-up tile needs to be part of a path from the left-most column and continuing uninterrupted until the right-most column. If any tile cannot form a complete path, you’ll turn it upside down as well. 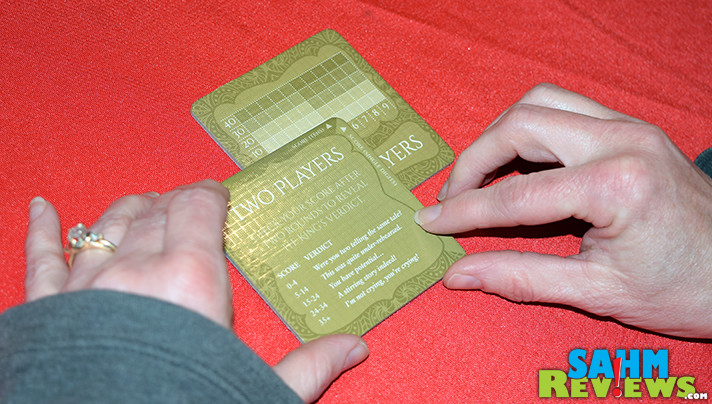 You’ll score based on the maximum number in the largest of each color of tile. So if you have four red tiles touching each other, you’ll score four for red. After scoring each color, subtract for face-down tiles then additional for gaps in the tableau where no tile was placed. Once you’ve scored the first round, you’ll select one column to remain then repeat the entire process for round two.

One of the things I like about this game is that there isn’t really a win/lose criteria, but rather a grading system. Once you’ve tallied the score from both rounds, you compare it to a verdict chart. Ratings run from low scores of “That didn’t make sense” to “Truly wonderful” for high scores. With simple numeric concepts and pattern matching, it can be played by younger kids as long as they’ve been explained the rules. It’s another in a great line of titles from Osprey Games. Read their latest stories on Twitter and Facebook and create memories of your own by picking up a copy of Shahrazad on Amazon, direct from Osprey Games or at your local game store. We’re looking to help one SahmReviews.com reader get started with their Shahrazad story by giving away a copy!